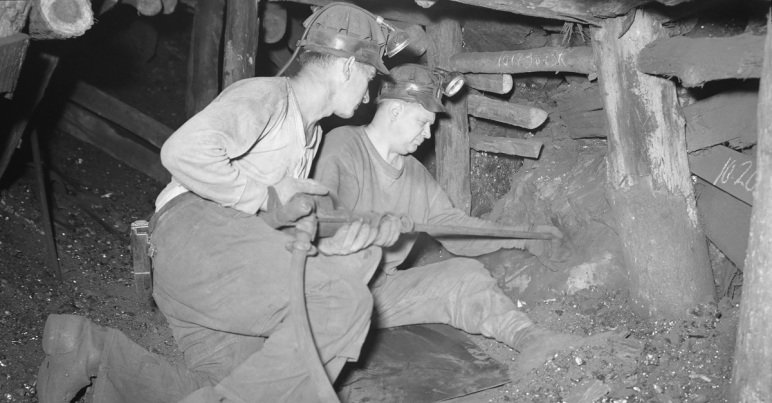 As the Roaring ’20s near their end, many in the Coal Region speculated that the future was bright for their namesake industry. The anthracite coal business had experienced turmoil throughout the decade, as battles between labor and management raged and the price of anthracite plummeted in favor of other fuel sources.

In order to off-set these issues, coal companies in the anthracite region went all in for mechanization and modernization. In an article published in the Pottsville Republican in May 1929, a writer got warm and fuzzy about all the amazing possibilities that modernizing the mining business would bring to Northeastern Pennsylvania.

As we will highlight below, this was all an illusion and this issues highlighted here have relevance for us in the 21st century.

The anthracite region is on the verge of a reconstruction of the industry which will eliminate most of the old time spectacularism and tradition which made the industry a great economic romance in the life of Pennsylvania.

The old timer sees now the accomplishment of many changes that have transformed the industry, but these changes have been coming so gradually as to be scarcely noted. Now, however, we may expect in one fell swoop changes that will be so startling that many of the old time experts may find themselves mere beginners in the opening of the new mining era.

The early history of mining was largely one of digging coal from the surface with a pick or drill. As the demand increased and the workings developed further and further into the interior, changes were necessitated by timbering, ventilating, water, gas and haulage problems. There came new machinery, hand-driven and power-operated, the safety lamp, new types of explosives, new precautions for safety of the workmen, the new dangers of pillar robbing, the gradual elimination of the mine mule, the electrically-lighted mine and the electrically driven machinery.

Outside, the picturesque breaker scenes have changed most marvelously in a quarter of a century. The breaker boy was one time one of the most important elements of the coal mining industry. They were employed by the hundreds at some of the breakers, little chaps of 8 and 10 years up to the aged and tottering worker who had played out in the service of the industry and who was unable because of dust-clogged lungs or tottering limbs to engage in anything more strenuous than that of picking the dull slate from the glistening carbon.

Among our older residents you will see the blue scars on hands that in early childhood had been cut and bruised by the ceaseless rattle of coal down the chutes to be cleaned by hand-power before being sent to the market. The breaker boss at the head of the chutes with an alert eye and a poised lash watching for the one who dared to shirk his work.

With the breakers working long after dusk in the short winter days, lighted up with smoking torches and the flaming lamps which the boys carried on the peaks of their caps, there was a scene never to be forgotten and never to be repeated. The blowing of the whistle releasing this army of scrappy youngsters, each one forced to take care of himself in the inevitable scrap that followed the day’s work, then this mass of flickering lights breaking out like flashes from an aerial bomb as the youngsters climbed the hills or plodded wearily down to the valley in different directions to their homes.

Now the breaker boy has been eliminated in favor of machinery which cleans the coal more efficiently and more quickly, by various processes that have been invented. The counterpart of these breaker boys is now found in the primary school room, often in the high school, at gas stations, or at scores of other industries that have sprung up to require a different kind of service and likewise employment.

Now even these modern breakers are becoming antiquated in the face of new inventions that have come about and the gradual improvement of machinery. Four super breakers have now been contracted for by the Coal and Iron Co., which are to revise present day systems of preparation.

These breakers are to be electrically driven and are to be equipped with machinery that are uncanny in the proficiency with which work is being done without the directing hand or brain of man. A few expert mechanics will hereafter very largely comprise the staff of the breaker corps of employees. A half dozen men will soon be doing the work that many thousands were needed for a generation remote.

It is calculated that with the coal market fully back to normal and all present day mines in full operation that the breaker equipment, which will handle the product of the mines over a large area, will be able to prepare in three days all the coal that was mined in a week.

One of the things that will before long become a matter for discussion and arrangements between the coal companies and the union will be for a plan to have these breakers work almost completely independent of the actual coal mining occupation. The elimination of man power in the breaker will probably very largely make this problem one easy of adjustment.

Then the electrically equipped inside workings, the introduction of more modern machinery, the electric haulage, etc., will establish entirely new conditions for the man who actually mines the coal.

Our people were fearsome that this new system to regulate anthracite production in the future would have the effect of eliminating so many employees that the business of mining would cease to be a great asset to the region by reason of the small working forces required. However, men high in the mining business say that there will be relatively little change in the number of employees, that their jobs will be more desirable than now and that as a consequence the mining business will be put on a highly profitable basis and at the same time permit the product to be sold successfully in competition with any other fuel which aims to inject itself as a substitute.

As we have the mechanics in many of the leading industrial plants of the country donning white clothing when they come to work, as we now have our dairy employees, similarly immaculately attired for their work, we may even some day come to that stage where the miner also will be able to go to his job garbed in white suits in place of the oil soaked and saturated outfit he wears today of necessity.

This essay is tinged with nostalgia for the anthracite industry in its so-called glory days. It lovingly describes the breaker boys, but only mildly hints at the physical abuse they faced at the hands of overseers and fails to mention the incredible dangers these boys faced.

The author also breezily discusses how the modernization impacted workers, improving safety and productivity on the one-hand, but also eliminating many jobs on the other. A hint at the origins of this unsigned essay comes with the reference to “men high in the mining business,” who assure the reader that all will be right between the coal companies and the union. This piece was clearly penned by someone associated with those in management with the Philadelphia and Reading Coal and Iron Company, and they had a serious interest in portraying their modernization efforts in the best lights possible.

Mechanization and modernization remains an issue for us today as productivity continues to rise across virtually all industry, while the number of jobs available in these fields stay level or even drop-off. The issues that this essay about coal mining in the 1920s breezes past are still with us today and are largely remain unaddressed. That is a problem, as artificial intelligence will soon make entire industries operable without much human activity. This NEEDS to be addressed by policy makers, business leaders, and labor officials now.

Back to the Republican story from 1929 – the author and millions of Americans had no inkling of the economic crisis about to descend on the nation and eventually the entire world. The Great Depression crushed all of this essay’s idyllic visions for the future of the Coal Region. The same collieries that had been modernized at tremendous cost were largely shuttered and the anthracite industry began to collapse. That collapse continued for decades until some stability has been found in recent years.