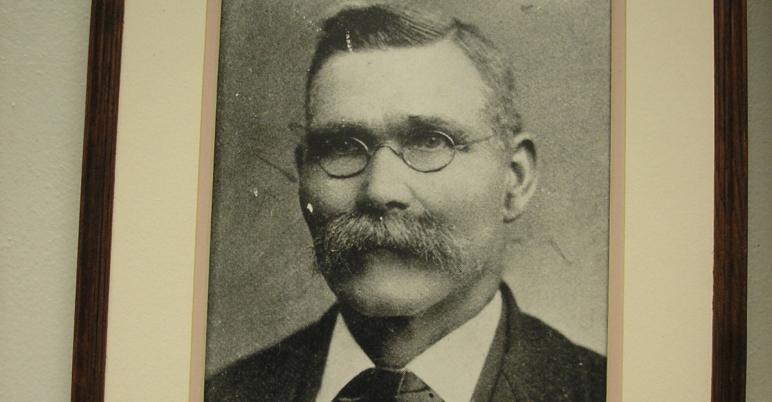 At the American Legion Post #239 in Williamstown, Dauphin County, I recently stumbled across items connected to Captain Richard Budd. They include his cap from Grand Army of the Republic Post #280 and a piece of his coffin that reads “Rest in Peace.” The native of Ireland emigrated to the United States with his widowed mother in the 1830s and settled in Schuylkill County.

Budd commanded Company K, 96th Pennsylvania from September 1861 until August 1863. He was struck by a shell at the Battle of Glendale in June 1862.

After leaving the US Army, he moved from Schuylkill County to furnish lumber for the developing mining village of Williamstown in 1864.

He remained a prominent resident of Williamstown for the subsequent 40 years. He died there in 1904 at the age of 72.

In 1985, Budd’s remains were disinterred and moved to a different cemetery in Williamstown. A piece of the original coffin was saved and donated to the American Legion Post in town. A decade later, a descendent of Captain Budd donated his GAR cap from his time representing the “Chester Post.”

These small artifacts represent a connection to one of Williamstown’s most prominent Civil War veterans.

The following is the obituary that appeared in the January 22, 1904 edition of the Lykens Standard. The obituary gives a remarkable amount of detail about how Civil War veterans played a crucial role in settling and establishing the coal mines at Williamstown and throughout Williams Valley.

The great, well-known, patriotic, generous Capt. Richard Budd of Williamstown, passed away at 11:30 a. m. Tuesday, after a lingering illness.

About two years and a-half ago he suffered a fracture of the right ankle from which he never recovered, and this, together with the death of his son George, on whom he greatly relied, and his advanced age, no doubt hastened his death. The funeral will be held this morning, with solemn requiem mass at the church of the Sacred Heart, Rev. Father Kennedy officiating. Interment in the Williamstown Catholic cemetery.

Born in Queens county, Ireland, in the early 30s he was a son of Benjamin and Mary Lawrence Budd. His father dying when Richard was seven years of age, his mother with a large family dependent upon her disposed of her small holdings, and about 1839, with her children sailed from Liverpool on the ship Roshes and after a tempestuous voyage landed in New York. Alter landing, the family went immediately to Pottsville, and then located at York Tunnel, where not long after the mother died. Richard with his brother and two sisters remained at the Tunnel, near Otto colliery, until he removed to Mt. Pleasant. where he engaged in manufacturing lumber under contract with a Philadelphia firm. He was there when the Rebellion broke out. and although he had been acting with the Democratic party, so did thousands of others who thought and acted as he did in the face of bitter opposition he commenced raising men for the army. Casting aside his business, with heart and soul he entered into the work in hand, and in a short time had recruited and brought into the camp on Lawton’s Hill a fine body of men, who on the 23rd day of September, 1861, as Co. K, 96th Regt. P. V., he being its commanding officer, was duly mustered into the service of the United States for three years.

Read about the origins of the 96th Pennsylvania HERE

With this organization he served, taking part in the Peninsula campaign of 1862; the Fredericksburg and Gettysburg campaigns and thereafter until Aug. 21st, 1863, when he was, for disability on account of disease contracted in the service, honorably discharged.

Returning home, he again engaged in the lumber business in Schuylkill county. In the spring of 1864 he removed to Williamstown, then a struggling village, at the instigation of his old regimental friend Col. Z. P. Boyer, who was then superintendent of the Williamstown colliery, which was then being started, and through him, was enabled to furnish the lumber for the big breaker then about commencing. At this point be has remained ever since, contracting under Maj. Jos. Anthony, Col. E.G. Savage and others, until the present time. Through Boyer, Anthony and the captain many of the old soldiers of the 96th and kindred regiments were placed in and about the collieries of the valley.

For the last 30 years he has been an active advocate of temperance, and belonged to the Sons of Temperance, Good Templars, and to Chester Post, No. 280, G. A. R., of Williamstown. He was a member of Sacred Heart Catholic church, but was exceedingly liberal in his belief, and most conscientiously.

He was twice married, first to Miss Fanny Robinson, at New Mines in 1852. Twelve children came by this marriage, nine sons and three daughters; of these there remains but five sons Christopher, John, Andrew, Richard and Allen. His second wife was Mrs. Eliza Shoemaker of a Schuylkill Haven family. No children came through this marriage.

By the death of Capt. Budd the 96th P. V. Asso’n is bereft of one of its staunchest members and most active supporters, and all his old comrades will miss him. But three of the original captains of the 96th now remain Col. W H. Lessig of Chicago, Maj. P. A. Filbert of Pine Grove, and Capt. J.T. Boyle of Pottsville. But five of the original lieutenants are left, and about 150 of the file. The field and staff are all gone, and but a corporal’s guard of the new officers survive.