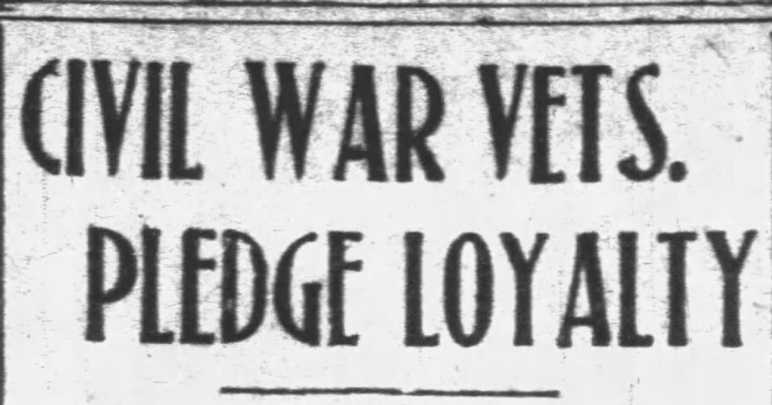 In April 1917, the United States threw itself into the Great War.

Millions were being mobilized in the largest military action since the American Civil War, more than a half century earlier. This action stirred the patriotism of Schuylkill County’s remaining Civil War veterans. Many of these graying old men had been among the first to march to Washington to protect the nation’s capital from secessionist rebels in April 1861.

In the days after the United States declared war on Germany, the veterans of ’61 gathered in the Schuylkill County seat to pledge their continued loyalty to their country and their support for the American war effort.

A few of the signatories are particularly notable. For one, this was a biracial group of signatories. William Tarr was an African American Civil War veteran living in Pottsville. He served in Company, 21st United States Colored Infantry Regiment during the Civil War.

We highlighted another veteran on this list previously on the blog. Charles Kershner signed these resolutions as a veteran of the 48th Pennsylvania. A decade later, a Pottsville Republican reporter documented his war-time experiences as a teenage soldier.

Still others were the notable “First Defenders” who raced off to Washington after Fort Sumter.

At a meeting held at the City Armory, Pottsville, April 14th, 1917, the following resolutions were adopted and signed by soldiers of the Civil War:

Resolved, That we, the undersigned, late soldiers of the Civil War, approve and endorse the action of President Woodrow Wilson, and the Congress of the United States, in defending the rights of the American people on the high seas. We all want peace and we are willing to fight for it.

Resolved, That we approve of the call for troops and the efforts of our Government to bring the war between the United States and the German Imperial Government to a hasty and successful termination.

Resolved, That it is an honor to respond to a call of our country and to that honor the young men of this country are eligible. Remember American never loses sight of the defenders of the nation.

Resolved, That we offer our services now, as willingly as we did in 1861, to our State and Government in any capacity or service to which they see fit to assign us.