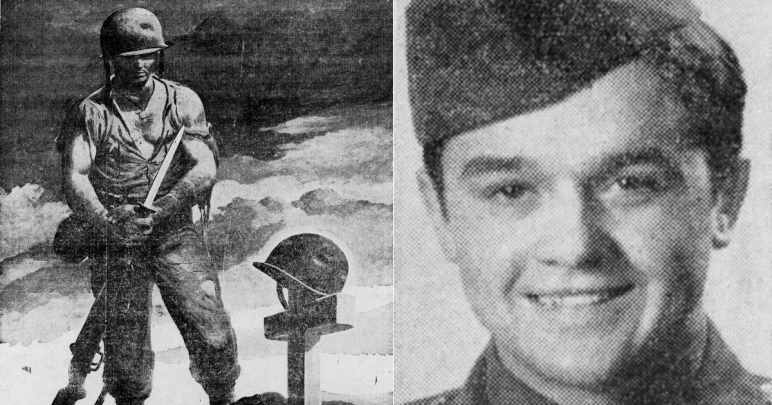 While Sergeant Irvin Schwartz remained in a military hospital in early March 1945, he mused on the idea of a war memorial in his hometown of Pine Grove, Pennsylvania. The young soldier hated the idea of a monument or statue dedicated to the soldiers who were winning the Second World War as he wrote. Still nursing a shrapnel wound to his leg, he had other ideas for ways to honor the sacrifices of Schuylkill County soldiers. He wrote to the West Schuylkill Press-Herald to share his suggestion:

In the General Hospital

A few words on a subject spoken about immensely in recent letters in the. In the majority of letters I am receiving currently, my friends and relatives in and about Pine Grove mention the possibility of “the Iris Town” some day erecting somewhat of a memorial for Pine Grove’s men and women in the service.

Plans for such a project will evidently start in the not-too-distant future which caused me to write to Mr. Speidel and suggest a memorial other than the ordinary one – a just plain monument. I hope the plan will be carried out, as I am quite certain the idea is far more pleasing to all of Pine Grove’s sons and daughters in the wars.

In our opinion, statues are “useless” war memorials and should be discouraged. Parks, athletic fields, hospitals, swimming pools, etc., are far better ways of honoring Pine Grove’s war heroes. One example is this. Already, Pine Grove High School is badly in need of a larger and more modern gymnasium. Not only for the benefit of the school’s over 400 students, but for hundreds of basketball fans as well.

In the near future we will be forced to build a new gym. So why not have it in honor of our servicemen and give the gym the name of “Veterans’ Alumni Gymnasium” or something similar. Also in the sports line, P.G.H.S. will undoubtedly have a greater outdoor sports program as son as this conflict is over and a new football and baseball stadium would be greeted by thousands. And such a memorial could be named Soldiers’ Memorial Stadium, Soldiers’ Field, Alumni Stadium, or anything in that order.

Anyway, monuments are useless as far as we are concerned, as well as you at home, so why not give the town a gymnasium, park, pool, or stadium? It’s just a suggestion.

Featured Image: Sergeant Irvin Schwartz and an illustration of an American soldier at the grave of a comrade, 1945