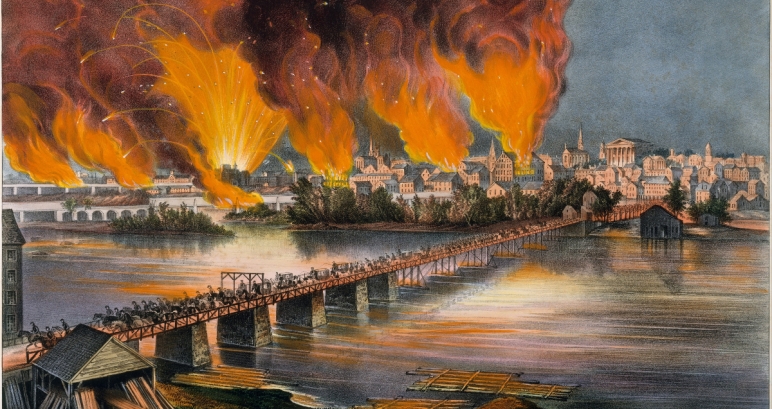 On April 3, 1865, the Confederate capital at Richmond, Virginia fell to the forces of the US Army. After years of bloody trial and error, the American flag again flew over the Virginia statehouse. In Pennsylvania’s Schuylkill County, Claude Merchant of Pottsville celebrated the news with a victory poem he titled “Richmond Has Fallen.”

The poem appeared in the April 8, 1865 edition of the Miners’ Journal of Pottsville.

From mouth to mouth, throughout the land,

Through strife and battle, amid fire and sword,

It fell before the men of Yankee land.

“Richmond has fallen!” was the message sent,

In every city, town and village – where’er it went

“Richmond has fallen!” was the flaming line

Printed in the papers – smoking from the press.

“Richmond has fallen!” was the flaming line,

Which headed many an editorial address.

Through the all the land – among high and low:

Then were the starry banners waved on high

As other swift-winged messages proved it so.

“Richmond has fallen!” was on every tongue

And every lip spoke the glad refrain.

On every corner, gathered an increasing throng,

As each to the other spoke the glad news again.

“Richmond has fallen!” “Great Babylon is no more!”

All her power, all her grandeur are gone:

Her crimes have been atoned in fire and gore,

And truth and right have conquered wrong.

And praise the Lord of hosts for evermore.

“Richmond has fallen!” Glory be to God!

Glory to Grant and glory to Sherman!

Glory to the brave, beneath the sod!

“Richmond has fallen!” “Richmond is ours!”

Let the nations together gladly sing,

As our flag floats o’er all our towers,

And make the welkin merrily ring.

“Richmond has fallen!” “Richmond is ours!”

Thanks to our soldiers! Thanks for our tars [sailors]!

And let all the people say “amen.”

The day after this poem was published, Robert E. Lee’s Army of Northern Virginia surrendered at Appomattox Court House, ending the Civil War in Virginia. The surrender also ended the conflict for many of the brave soldiers of the Coal Region who fought successfully to save the Union.