In his 1983 memoirs, Fire in My Bones, Charles H. King, Jr. briefly discussed his childhood in Schuylkill County. 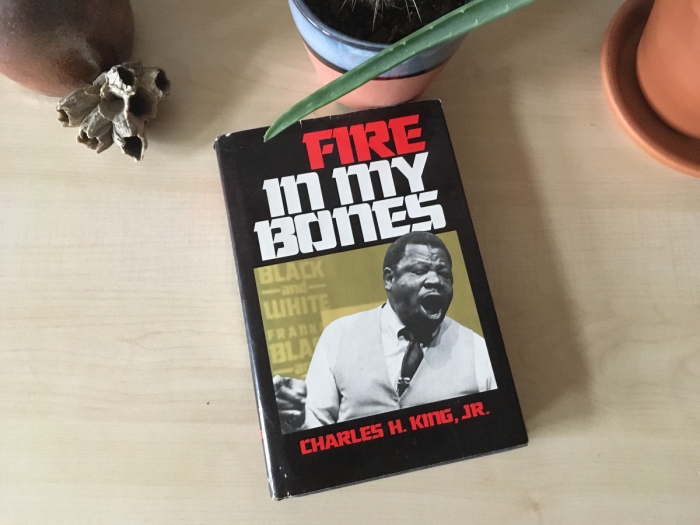 King’s family came to the Coal Region in the 1920s. His father, Charles H. King, Sr., allegedly murdered a white man in rural Louisiana in the first decade of the 20th century. He escaped lynching and lived the rest of his life under an assumed name in the North. The elder King became a pastor within Pottsville’s black community in the 1930s and 1940s.

The younger Charles King grew up attending the public schools in Pottsville. In this excerpt, King describes how he blended in with the white community by fulfilling his classmates’ expectations about a young black child.

Pottsville, Pennsylvania, population 24,000 (with fewer than 300 blacks), was an ideal setting to cast me into the mold of whiteness. Like a fly in a bowl of milk, I endured those years without any notable traumas induced by my blackness. I was the class clown, the cutup, and it was not long before I discovered that humor would always make me a favorite of teachers and students alike. I learned to roll my eyes like Montand Moreland, Charlie Chan’s “numbah one niggah,” and to say like he did, “Feets, do your duty.” I was apologizing then, at that tender age, for being black.

One day I came home crying from eight grade. My shop teacher had kicked at me when I was late for class. He informed me that I could not return to class until I went home to get a note from my parents. It was a brushing kick, like one that is playfully delivered, and I hardly felt it. But he was white, and so was the rest of the class that saw it.

As I related what had happened to me, I saw my father through my tears surging ahead of me back to the school. He walked tall, angrily tall, and strode into that classroom. Without a word, he seized Mr. Minabak by the lapels of his coat and pulled him out into the schoolyard. Three men, including the principal, had to restrain him, and out of my father’s mouth came torrents of rage and obscenity.

That was my first exposure to black rebellion, and it came from a deeply brooding and gentle man – my father, who always talked nice to white folks… Somehow my teacher had rekindled the flame of his past, and he had dared to fight back at those who had sapped his manhood, his desire to live.

Later in King’s book, he notes when he first came into contact with the realities for African Americans in the United States in the mid-20th century. Following King’s graduation from Pottsville High School, he joined the US Navy. There, he could never hold a combat position, and instead worked in the kitchens aboard ship. He and his fellow black sailors were treated poorly, merely because they were black.

Read more about racial segregation in the US Navy

This discrimination he faced as he reached adulthood during World War II began stoking the fires of resentment in the young sailor. These flames were fanned when he experienced Jim Crow segregation in the South during and after the war.

King’s descriptions of his childhood in Pottsville reveal that he experienced a relatively normal childhood for the Coal Region. He juxtaposes his experiences as a black child in Schuylkill County with that of black children elsewhere in America. It wasn’t until he reached adulthood that he realized how sheltered he had been from the realities of racism in America. Once that fire was ignited inside King, it could never be put out.

Though King never mentions it in his book, Pottsville did have racial issues in the 1930s and 1940s.

We’ve written about a minister’s efforts to deal with rampant unemployment in the black community in 1940. He had found that local businesses were refusing to hire African Americans.

Featured Image: Charles H. King in his Navy uniform and a postcard scene of Pottsville in the 1930s-40s.

One thought on “A black childhood in Pottsville in the 1930s – Charles H. King, Jr.”