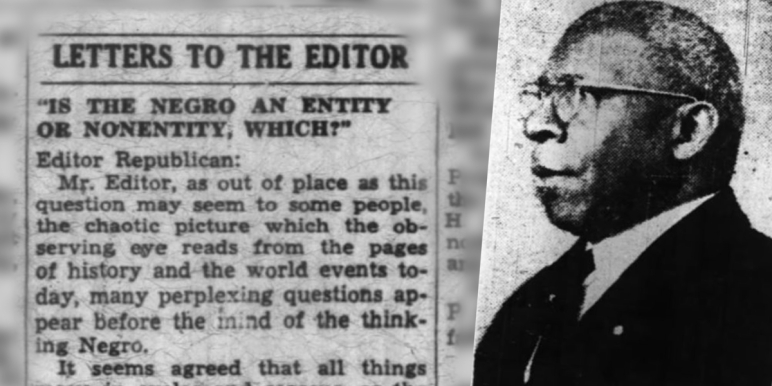 In the summer of 1940, the Bethel African Methodist Episcopal Church in Pottsville welcomed a new minister to the pulpit. Reverend James Solomon Benn, Jr. was born in South Carolina in 1896 and had followed his father into the ministry of the AME church. As a minister, the Benn family traveled widely across America, serving small black churches across the nation.

In Pottsville, Rev. Benn found a troubling situation among black residents and members of his church at Laurel and 9th streets. Unemployment was a major issue in Schuylkill County, but was particularly pronounced among the region’s African American population. Local employers refused to hire black employees for the jobs they had available.

As Benn and his family settled in, he began reaching out to community leaders and the editorial team at the Pottsville Republican. On July 26, 1940, the Republican published an editorial about Rev. Benn’s efforts to find employment for his congregation and those in the city’s black community. “[Rev. Benn] estimates that less than 15 percent of colored adults in Pottsville are unemployed,” the editors wrote. “He would like to be able to have his people carry their own part of the load, but if they are not able to obtain employment and have nothing to look forward to, there is an explanation of why they drift into evil ways.”

The minister must have made an impression on the Republican’s editorial team. They concluded their editorial with this line: “With our colored population we must devote serious thought to finding them employment, so they may be in position to maintain their homes and families in comfort and in surroundings that are inviting and healthful.”

Benn was seeking work for about 240 people in Pottsville’s black community who were struggling to find employment. The Pottsville Republican counted about 1,100 African Americans in Pottsville in 1940.

In a bid to reach out to the community, Rev. Benn began writing letters to the editor about his community, the challenges they faced, and the discrimination that plagued not only Schuylkill County, but America as a whole. With the nation finally beginning to recover from the Great Depression, African Americans in the Coal Region found their efforts to participate in the recovery and return to economic prosperity stymied.

In the essay he published on August 13, 1940 in the Republican, Benn explored the concepts of black citizenship and how African Americans had been excluded from the benefits of American life dating back to 1619. Benn specifically cites that year as the beginning of the black experience in America and traces the roots of racial discrimination and racial strife back to that date in particular.

“The Negro, 20 in number, was confiscated from the African shores and brought to America, landing at Jamestown, Va. in 1619 as you know,” Benn wrote. “He has, since that time, labored in the cotton fields and worked unceasingly for the clarification and beautification of the greatest country in all the world – America. He now numbers fifteen million and yet, the political and economic system of the country in which he spent all of his life in toils, has never given him a seat at the first table.”

Benn asked for the people of Pottsville and Schuylkill County to acknowledge this inequality and to take steps to help him improve the situation.

Below is the full essay by Rev. J.S. Benn Jr. that was published in the Pottsville Republican on August 13, 1940:

“IS THE NEGRO AN ENTITY OR NONENTITY; WHICH?”

Mr. Editor, as out of place as this question may seem to some people, the chaotic picture which the observing eye reads from the pages of history and the world events today, many perplexing questions appear before, the mind of the thinking Negro.

It seems agreed that all things move in cycles and seasons, as the proverbial statement to “everything there is a season, notwithstanding this, there seem to be Entities and peoples who never have their season in the realm of the better things of earth, which God has made for the human family.

For instance, the people that are called Negroes were among the earliest inhabitants of the earth, but the history of economics has yet to record the cycle or period of this recognized national fair and equal sharing as a race in the national affairs of the nations of the earth. Thinking in terms of the cosmos to the God who made the world and they that dwell therein, who said, all were good, and of Abraham, thru whom the Lord said the nations of the earth, shall be blessed, it being an axiomatic fact – things do move in cycles and everything is an Entity; when do you think or suppose the cycle of equal or just consideration in social, civic, economical and political affairs will come to the Negro race void of superiority or inferiority complex?

The Human Side of the Negro Question

Of all the problems of races and nations that live in the United States, none seem to tax those who control and direct the affairs of American civilization as much as those of the Negro. Is it a fact that he is more of a problem in this country than any other race? And if so, why? Do white people know the Negro problems from a fair and impartial study of them? Is it a fact that the Negro constitutes the greatest social problem of any race in America today, if so why?

If the Negro is an Entity, a human being, and American citizen, define the rights and privileges of citizen of this commonwealth. The Negro, 20 in number, was confiscated from the African shores and brought to America, landing at Jamestown, Va. in 1619 as you know. He has, since that time, labored in the cotton fields and worked unceasingly for the clarification and beautification of the greatest country in all the world – America. He now numbers fifteen million and yet, the political and economic system of the country in which he spent all of his life in toils, has never given him a seat at the first table.

He has been loyal and true to the American flag and has never led a Communist, Socialist or Fifth Columnist party. He has accepted the white man’s Bible and his God and has gone side by side with him in every conflict when given a chance to protect the honor of our democracy, yet we have only five commissioned officers in the armed service of this country.

Mr. Editor, considering the human side of the Negro question, please help the Negroes of Pottsville to get some of the jobs here and get at least a living wage for what they do, this will go a long way in solving the Negro’s problems.

The situation had improved enough by the spring of 1941 that Rev. Benn, before officially being transferred to an AME Church in Philadelphia, took black residents of Pottsville to the big city to detail how much had changed.

“Rev. L.M. Fetterolf will make an address explaining the work of the colored people in this city,” the Republican wrote on May 14, 1941, “and the excellent service being rendered by Rev. Benn under most trying conditions, the latter having clearly demonstrated his ability to cope with the situation if given support such as is required for the benefit of his people.”