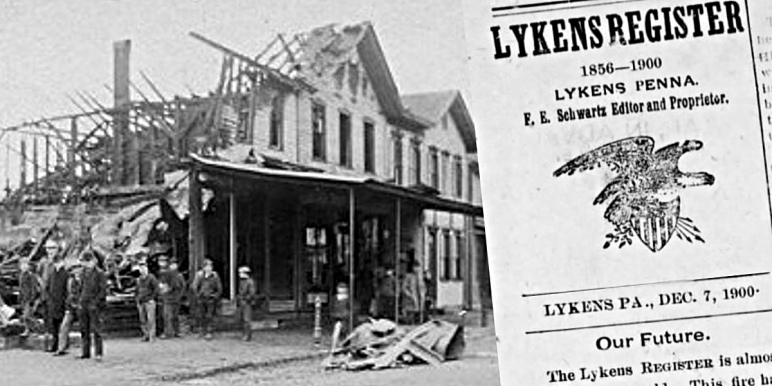 This post originally appeared on the Gratz Civil War Blog in January 2014.

A cool breeze nipped at Isaac Deitrich as he tramped home in the darkness. It was a little before midnight on the evening of December 5, 1900 when his late shift in the mines let out. Wiconisco and Lykens lay below him in the twilight, only dim shadows marking where each town began.

He left his post in Bear Gap and worked his way down between towering piles of coal refuse towards his home near the Pennsylvania Railroad depot under a bright, almost full moon.

As he crossed over the bridge into Lykens,  Deitrich, 29, noticed a glowing light from the back of the Lykens Register office, a weekly newspaper located on the northeast corner of Market and Main Streets since 1869. Tired, and with his suspicions only slightly aroused, Deitrich disregarded the flickering, orange light. He often saw a soft glow from in the Register’s writing room on the second floor late into the evenings.

A few minutes later, 26-year-old William Matter, Jr. saw flames tearing from the back of the Register building and the neighboring shoe store owned by J.J. Nutt.  Matter was returning to his home further down Main Street, when he witnessed a growing inferno begin to envelop the two-story structure. Matter quickly ran to the fire house three blocks away on South Second Street to sound the alarm. The call for the volunteers  of the Liberty Hose Company No. 2 went out at 12:15 A.M.

By then, the fire had spread to the adjacent buildings in what was collectively known as the “Brubaker Block,” in the heart of downtown Lykens. A stiff westerly wind fed the flames, which by 1 o’ clock had fully engulfed both the Nutt shoe store and the Register office. Local officials feared the blaze could reach “as far east as the Pennsylvania Railroad,” several blocks farther down Main Street. Clanging fire bells echoed through the empty streets, and citizens emerged to the sound of roaring flames and the shouting firefighters attempting to save the rest of the block.

A vacant building next to the shoe store went next, the fire laying waste to the two story structure. Luckily, the volunteers of the Liberty House Co. 2 gained an advantage in this circumstance. The empty storefront provided a firebreak, allowing them to stamp out the flames which threatened to next devour G.B. Brubaker’s hardware store. Only a heroic, night-long battle with the flames kept it from decimating the entire block. The volunteer fire company threw water on it from three directions, utilizing an extra hose line supplied by Hood McKay, the superintendent at the Short Mountain Colliery.

Fortunately, no one was seriously hurt during the fire or the fight to save the neighborhood. One minor injury occurred when a fireman, Willis Bingaman,  fell through a weakened floor inside the Brubaker store and “received a cut above his eye which the doctor dressed with a few stitches,” according to Chief Burgess Henry F. Bueck.

When dawn broke on the scene, the western section of the “Brubaker Block” lay in smoking ruins. Fire completely gutted the Register’s offices, the J.J. Nutt shoe store, and the vacate building next door. The destruction proved to be most complete in the Register’s office, and the entire structure collapsed into the street. The Brubaker hardware store also suffered from extensive water damage and its roof was all but destroyed, yet its sizable stocks were salvaged during the struggle. In total, the fire inflicted more than $15,000 in damage to the bustling downtown district.

Click here for photos and a full report from Liberty Hose Co. No. 2.

The Register’s owner, F.E. Schwartz, estimated the damage to the paper at about $3,200. Insurance would cover a little over half the damages cost, which helped to get the paper back on its feet in the weeks that followed. Martha Jane “Mattie” Opie, editor of the Williamstown Times, offered to run the next week’s issue of the Register off her printing presses.

What insurance and neighborly goodwill could not replace, however, was the loss of nearly the entire Register archive. The paper’s collection, dating back to its founding in 1865, burned up along with the office. Here, a vast record on weekly events in the Lykens area for more than 35 years went up in flames.

The Register traced its root back to the months following the Civil War. Newspaperman Samuel B. Coles and Captain George Washington Fenn published the first issue of the Upper Dauphin Register on August 17, 1865. Coles had been in the newspaper business in the Lykens Valley since the mid-1850s. His Farmers’ and Miners’ Journal first appeared exactly nine years earlier and operated until the outbreak of the war when his entire staff, Henry Keiser, John C. Gratz, and two others, signed up for the Union army and left Coles without anyone competent enough to operate the paper. The Lykens area would operate without a newspaper until the close of the war.

A native to the town of Litchfield, Connecticut, G.W. Fenn came from a deeply rooted publishing family. By 1860, 16 year-old George had moved in with his uncle Theo. Fenn, a well known newspaper editor in Harrisburg, PA. Too young to serve at the outbreak of the Civil War, Fenn had the good fortune of turning 18 just in time to join up with the 127th Pennsylvania regiment, the “Dauphin County Regiment,” in 1862. He served nine months with the regiment until it disbanded in May 1863. Called on again to serve, Fenn spent several years as a Captain in the 201st Pennsylvania and led Company C through numerous heavy engagements. On returning to Harrisburg, he almost immediately signed on to assist Coles in the formation of a newspaper at the northern reaches of Dauphin County.

Their budding partnership proved to be short lived. Fenn fell ill in July 1866 with what doctors described as a “brain fever” and died shortly afterwards. Those who knew the young Captain pointed the finger at his war experiences as the source of the illness.

The death of such a young, ambitious reporter stunned the region, and Coles was left to sort the paper out on his own. He held his own for several years, before transferring the ownership of the newly renamed Lykens Register to George Washington Fenn’s older brother Samuel. The elder Fenn would carry the newspaper for decades, transitioning into a new era for journalism that would come near the end of the nineteenth century.

The Brubaker Block fire in December 1900 did not end the reign of the Register, but it did mark the waning of its influence. Previous competition had come and gone, but the Lykens Standard, with none other than the aged Samuel Coles at the helm, seemed intent on running down the Register for a dominant share of the local readership. In 1903, the Register folded and the Lykens Standard became the dominant newspaper in the region.

Featured Image: Damage from the Brubaker Block Fire and a headline about the fire from the Lykens Register