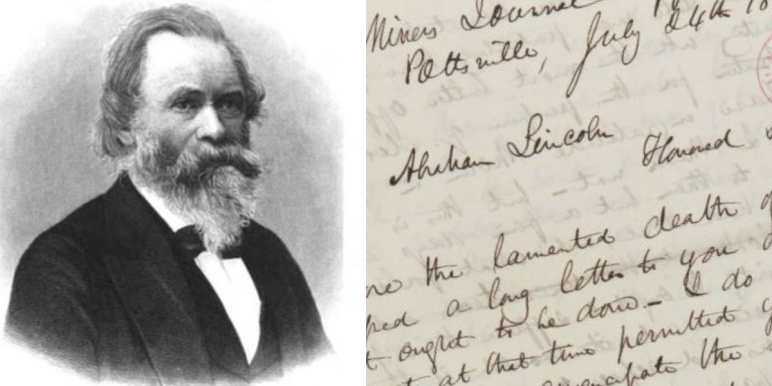 People have said many things about Benjamin Bannan over the past century and a half. Many decry the stances made by the legendary editor of Schuylkill County’s chief newspaper, the Miners’ Journal of Pottsville. During his lengthy editorial career he made controversial stances on many hot-button issues of his time.

He has been cited for his vehemently anti-Catholic and anti-Irish stances and took a hard stance against any form of organized labor as the anthracite industry bloomed in the 1850s. But as the Civil War broke out in 1861, Bannan made an aggressive push that puts him, in one respect, on the right side of history.

During the Civil War, Bannan stood as the bulwark of Republican political power in Schuylkill County and threw his full weight behind President Abraham Lincoln and his policies. And in some ways, Bannan jumped ahead of the famously cautious executive from Illinois. 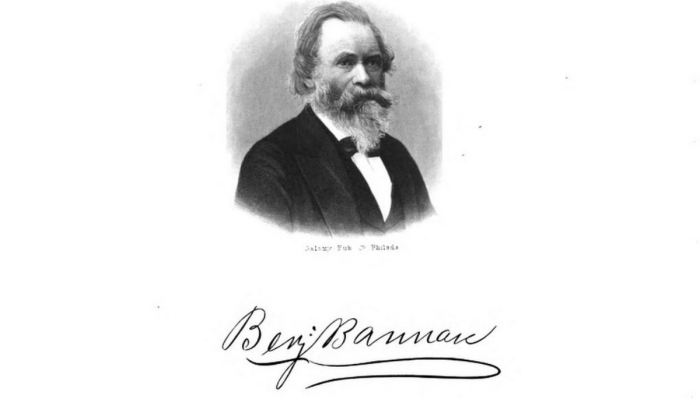 On the issue of slavery, Pottsville’s Ben Bannan took a firm stand in support of emancipating 4 million slaves in a bid to crush the Confederacy and end slavery forever.

Bannan wrote to Abraham Lincoln in July 1862 in support of an emancipation proclamation, months ahead of the documents issuance after the Battle of Antietam. The letter is held in the collections of the Library of Congress:

A few days before the lamented death of your son I addressed a long letter to you on the Slave Question & what ought to be done. – I do not know whether your anxiety at that time permitted you to read it. It was urging you to emancipate the Slaves as a military necessity.

It has been delayed — but it is not too late yet to strike this blow, and crush out this Rebellion, and the cause of it forever. Eight or nine months ago Fremont declared the slaves of the Rebels free — the rebels reeled under the blow — and the whole country rejoiced, except the border state slave holders — they threatened, and the order was revoked — two weeks ago Congress done what Fremont done — 8 or 9 months before Gen Hunter declared all the slaves Free in South Carolina, Georgia & Florida— There never was an order received with greater enthusiasm — it struck dumb even the Northern Rebel sympathizers — and there would have been meetings held and great rejoicing throughout the whole country — but this order is also annulled, to appease the Border states — since then from 2 to $500,000,000 have been expended — nearly one hundred thousand soldiers destroyed and crippled, and the lamentable spectacle of these very Border State men, particularly those of Kentucky absolutely uniting with the most bitter opponents of your Administration for the purpose of destroying it. Was ever such base ingratitude shown in the history of any Country?

I think not — but this is not all, — when you appealed to them but a few days ago, setting forth what you had done, and what forbearance you had shown — look at the uncourteous and insulting answer of the majority. It ought to suffuse their faces with shame and confusion — and it would, if they were not slave-holders and representing slave-holding interests, which they consider paramount to their duties to their country.

In the Army order of to-day, the border states are again protected. Why should they be so protected in their Slave property? Have they not organized Guerrilla bands even invading the free State of Indiana & murdering an the citizens & have they not been guilty of the most savage warfare — and are not the Rebels in these states as guilty and deserving of punishment as in the Cotton States? I think, under the circumstances, that they even deserve greater punishment than those of the Cotton States.

But my object in penning this letter was to state that in my opinion this Rebellion cannot be crushed without a general emancipation of the slaves— You may overrun the South with an Army of 7 or 800,000 men, but after that is done, it will require at least a half million stationed in the South to keep the slave-holders in subjection. The country cannot stand such an expense — and emancipation will have to come at under any circumstances, and at a period when we will have no means to remunerate loyal men, even if we desire it. You cannot make Peace with Slavery, because if you do, the Union men of the South will be driven out, and the South will rapidly retrograde and be in a worse condition than ever.

Then why not wipe it out now, and then there will be nothing to fight about— Two hundred million of dollars will remunerate all the loyal slave holders in the country — a sum that will not pay the expenses of this war 150 days — why continue the war 150 days spend the $200 000 000, and be no nearer crushing out the Rebellion than now? Is it wise to delay?— Let me tell you that you never can conquer and hold the South, so long as slavery exists, — except at an expense that no nation can sustain. And it will take less money to pay all the loyal slave-holders in all the States including the Border, than it will later to pay the slave-holders in the Border States under a system of gradual emancipation, such as they may inaugurate when they cannot help themselves, and think it will be more profitable to do so.

A decree of general Emancipation by you now would be hailed as the greatest stroke of policy that any Government ever practiced, not only by the people of this Nation, but throughout the whole Christian world, and would immortalize the man who dared do it — he would stand second to no man who ever lived. It would give a death-blow to the Rebellion — save at least one hundred thousand lives, and not less than Five hundred millions of treasure— With such a result before you, how can you hesitate any longer.

From the very moment that decree went [south?], you would see the Rebellion beginning to topple— The Slaves would learn the decree nearly if not quite as soon as their Masters — and long before any of the armies were to penetrate into the heart of the Rebellion, thousands of Slave negroes would refuse to work as slaves and demand wages — for fear of conflicts thousands in the Rebel Armies would go home to protect their families and to take care of the negroes — this would decimate the armies largely, and as our Armies approached freedom would be declared to the Slaves the power of the Rebels would be broken, because they would be stripped of their power — the Union sentiment among the non-slave holder’s would immediately spring up to support the Government — and the Rebellion so far as fighting, would be at an end— If the rebel slave-holders ran away the negroes would support themselves on their plantations [that?] they have cut up and sold to the soldiers & others, who would soon employ the negroes, — and then slave holder’s if they are really in favor of the Union will be remunerated by the Government & they too could pay wages to the negroes on their plantations.

This would infuse a majority of Union men in all the districts of the South, who would exercise a controlling power, and in less than two years the same system could be inaugurated on the whole South in a peaceable manner, & every body would be astonished that so great a change could have been brought about in so short time.

I am now the oldest Editor in Pennsylvania connected with the same paper, — and if it were the last words I utter could utter, I tell you that I believe that such a Policy would now meet the approbation of nine tenths of the loyal people of the North, and also of a majority of the non-slave holding people of the South.

The editor of the Miners’ Journal penned this letter just days after President Lincoln privately revealed his preliminary emancipation proclamation to his cabinet. After comments from his cabinet secretaries and a remark from Secretary of State William Seward, Lincoln pocketed the document until the United States Army won a major battle against the Confederacy. That victory came on September 17, 1862 at Antietam. Lincoln issued the preliminary Emancipation Proclamation five days after the battle.

Bannan publicly supported emancipation and cheered the issuance of the Emancipation Proclamation as a measure to bring about the end of the Civil War. He penned a eloquent response to the document’s appearance on September 27, 1862 in the pages of the Miners’ Journal:

Slavery has been the perpetual disgrace to the American name. Slavery has bloomed into sedition, and ripened into war. Why should it live? It has menaced our dearest rights, and has robbed us of our dearest kindred…In self-defence we have wrestled in its embrace – wrestled in blood, war, carnage, desolation and slaughter – and all in vain. –

The struggle is not for life or death. If slavery lives the Republic dies. The Republic must live, and so slavery must die.

This is the meaning of the President’s proclamation, and his words record slavery’s inevitable doom. God Bless Abraham Lincoln! Unborn millions, yet to be the recipients of true freedom and happiness, will hallow the memory of our good President.

Elsewhere in Schuylkill County, however, the response to the Emancipation Proclamation’s issuance resulted in rebellion. In October 1862, mine workers in mining districts northwest of Pottsville rebelled. Among the conspiracy theories that sparked the rebellion? That emancipation meant that former slaves would be brought to Schuylkill County to replace Irish mine workers. That rebellion ultimately fizzled when Federal troops appeared in the Coal Region.

Benjamin Bannan continued his support for Lincoln and the Union for the remainder of the Civil War, lock-step with his chief until the president’s demise at Ford’s Theatre in April 1865.

Featured Image: Benjamin Bannan and the letter he wrote on July 24, 1862