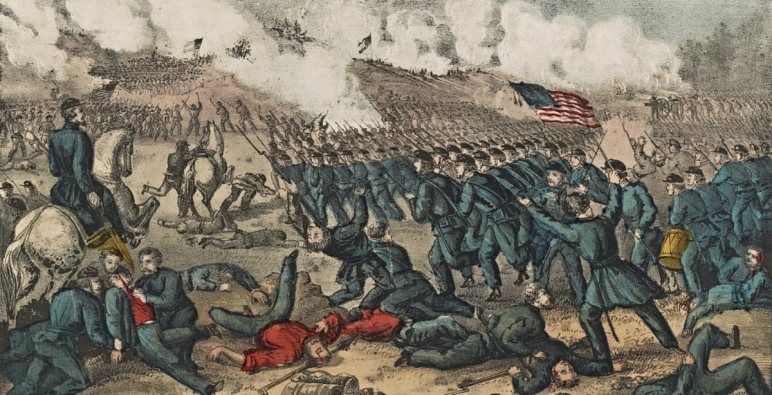 “The plains of Fredericksburg have been baptized with the blood of our neighbors and friends,” wrote the editors of the Pittston Gazette on Christmas Day 1862. “We have sorrow and mourning on every side.”

G.M. Richart and A.C. Thompson were introducing readers to three letters written by soldiers from Luzerne County in the aftermath of their first combat experience at the Battle of Fredericksburg on December 13, 1862.

Corporal Joshua Howells and Corporal Martin Burch both served in Company K, 142nd Pennsylvania, a unit that organized at Pittston, Pennsylvania in August 1862. Their fight at Fredericksburg, Virginia was their first taste of battle.

The 142nd Pennsylvania engaged in brutal fighting on the southern end of the Fredericksburg battlefield on December 13, 1862. Their attack was aimed at General Thomas “Stonewall” Jackson’s troops south of Fredericksburg. In the chaos, the 142nd Pennsylvania did not receive support from other units on their right flank and, as a result, the 142nd took heavy casualties in its assault on the Confederate line.

The letters from Howells and Burch tell the story and what it was like to be thrown into the meat grinder near what became known as “the Slaughter Pen.”

Thank God I have escaped one of the most terrible charges of the war. Saturday was the awful day which none of us will ever forget.

Our Division had to charge uphill, in the face of batteries which were pouring death and destruction into our ranks. How I happened to escape is more than I can account for, as the boys fell all around me.

We lost out of our Company, killed, wounded and missing, 42. Albert Ink is missing, I presume he is on the field either killed or wounded. Cyrus Campbell was wounded, Major Bradley had his leg taken off. The worst of all is we had to fall back. The reinforcements on the left wing did not come up to time. We have but 21 men left.

Today we expect to give them another trial. I pray God that he will preserve us from their deadly missiles… I never want to be under such terrible fire again. Such sights sicken the heart… My health is poor, which makes it worse for me. I cannot stand double-quicking; I came very near being taken prisoner when we fell back; I was so weak that I could scarcely stand, but I managed to get out although the balls were whistling all around me. Our only hope is in God.

We took the city without much loss, but yesterday told heavy on us and we gained nothing, the loss in our Regiment is terrible – we went in the fight with 72 men and came out with 21. I am slightly wounded in the fingers of the left hand and am detailed to take care of Major Bradley, the poor fellow had his leg taken off below the knee.

Many are only hurt a little and a few are killed, but thank God I still live. One would have thought it impossible for a single man to escape through the shower of shell, grape, and ball in which we were caught.

Charley Steel got hurt a little – the ball entered his haversack and was stoped by his plate… I got 5 balls in my clothes, one in my haversack, and one in my cartridge box, only got blood drawn on my fingers. Wm. Kendall was killed instantly, by a grape shot in the head. Buskirk is not hurt.

I now sit down to give you a short history of the battle. We crossed the river on Friday without opposition and encamped in front of the enemy, and in the morning we advanced on his left cautiously, our batteries shelling the woods in our front. Upon arriving on a little rise of ground the enemy opened on us with shell, but did us little harm. Our skirmishers were deployed and soon found the rebels hid in the woods.

We advanced to support the skirmishers and when we got within range they gave us a volley and ran. We returned the fire and advanced at a charge bayonet, about 40 rods, when we were met by a volley of grape and canister which cut us terribly, but still we went on and took the battery in front, but our reinforcements failed to come up and the rebels rallied and drove us a short distance.

At this time I got wounded in the fingers and was ordered to the rear, and here my knowledge of the moves end, but I know we did not gain anything; our loss is very heavy and is more than that of the enemy. The loss in our regiment is near 300 in killed, wounded, and missing…

We went in like soldiers and got badly cut up, and the end is not yet come. Our troops came over on this side of the river last night, and are now going to turn the right of the enemy’s position, it will be a hard job for they are finely located and covered by woods, but they must come out for our courage has just began to arouse itself… My health is very good. My finger is quite painful but I think it will not have to be taken off.

Corporal Joshua Howells continued serving with Company K, 142nd Pennsylvania until the end of the Civil War. He gained promotion in May 1864, gaining command of Company K for the duration of the war.

Corporal Martin Burch was discharged from duty in March 1863 due to wounds received at Fredericksburg.

In total, the Union Army lost more than 13,000 men in the Battle of Fredericksburg. Confederates only lost 5,000 men. The one-sided engagement created untold grief on the Northern home front. In the weeks after the battle, families in communities like Pittston learned the fate of loved ones.

“A most painful suspense broods over the minds of friends at home,” wrote the Pittston Gazette that dark Christmas Day. “No disaster since the war commenced has charged home upon this community with such severity.”

Featured Image: The Battle of Fredericksburg (Library of Congress)