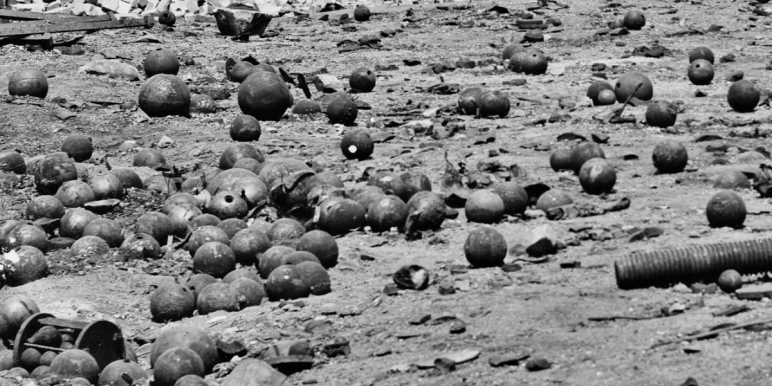 In the wake of the deadliest day of the American Civil War, thousands of visitors from across the North traveled to Maryland to walk the battlefields where two great armies had clashed near the village of Sharpsburg. All converged on the fields in the vicinity of Antietam Creek, where on September 17, 1862, Union and Confederate forces fought one of the most consequential battles in the nation’s history.

On the battlefield, visitors in the autumn of 1862 found all the detritus of a great clash of arms- discarded equipment, shattered caisons, and makeshift grave markers atop 3,600 shallow graves. Across the battlefield, the landscape showed the marks of a horrific conflict. Shattered buildings, scarred trees, and great furrows in the earth where shells had exploded. Thousands of maimed soldiers were still in makeshift hospitals that dotted the countryside.

The first battlefield tourists came to gape at these sights. But they also came to loot the battlefield for souvenirs. Among the favorite items to collect were the many unexploded artillery shells that dotted the landscape. Many a local farmer or Northern visitor gathered up these missiles to show family and friends artifacts from the great battlefield of Antietam. These keepsakes were deadly, however, and very capable of causing serious injury.

Newspaper accounts from the era document numerous incidents where citizens were killed or seriously injured when handling unexploded shells. The case of Henry Burrier and his wife from October 1862 spectacularly demonstrates how curiosity and ignorance could lead to disaster. Burrier, a resident of Frederick, Maryland, had visited the battlefield at Antietam and brought home a number of artillery shells he scooped up on the field. The Middletown Valley Register details what happened next in its October 17, 1862 edition:

Explosion of a Shell – Henry Burrier, a German living in Bentz Street, above Second, visited the recent battlefields last week, and brought away three unexploded spherical shells. Upon examining them on his return home, he discovered that they were surrounded by rims of lead (which confined the charge of powder in the shell) and the wise conceit entered his head, to put the shells in the stove and melt the lead off. No sooner had he it upon this economical idea, than he placed them in the stove and went about his business, expecting to find the lead melted off upon his return. Meanwhile his industrious wife was busily engaged at the wash tub behind the projecting side of an old-fashioned chimney, when – bang! – one of these missiles of death bursted, tearing the stove, part of the chimney place and furniture of the room to pieces , and a portion of it falling into the wash tub. Vexed but not disconcerted, Mrs. Burrier scolded a little at her husband for putting “these foolish things in the fire,” and taking up the tongs pulled the other two shells, which were pretty well heated, out of the coals, and threw them into the street. Her escape was almost miraculous, being principally due to the intervening and massive chimney.

The Burrier family was very lucky. Others were not.

Accidental detonations occurred frequently during the fall and winter of 1862-1863. The death of a young man near Sharpsburg, caused by the explosion of a shell, led the editors of the Hagerstown Herald of Freedom & Torch Light to publish the following on March 4, 1863:

Thus, we have another warning to add to the many which have already been published of the extreme danger of handling or tampering with these destructive missiles. Large numbers of them were collected from the battle-field of Antietam, and in many instances have been permitted to lay carelessly about the premises of those who secured them as relics. If they are not buried out of sight, or removed in some other way, sooner or later they will fall into the hands of children, or other indiscreet persons, whose curiosity may prompt them to open them, when the consequences will assuredly be most disastrous. Let all take warning and keep clear of them.

Yet, the explosions continued well after the Civil War ended in 1865. And to this day, these shells continue to startle local residents and require the expertise of bomb squad technicians.