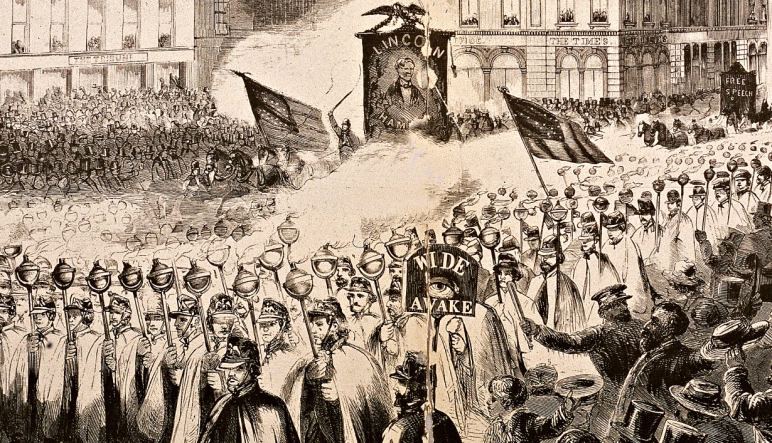 On a fall evening in 1864, residents of Lykens, Pennsylvania emerged from their homes to see a dramatic procession through their small, drab village.

Supporters of the 16th President of the United States were out in droves to show their enthusiasm for their war-time leader. In keeping with the “Wide Awake” tradition that drove the successful election campaign of Abraham Lincoln in 1860, a torch-light procession was scheduled through the mining village on Dauphin County’s northern border for Monday, October 10, 1864.

The election of 1864, pitting Abraham Lincoln against his former General-in-Chief George B. McClellan, occurred amid a flurry of events in the country’s ongoing civil war. McClellan, the Democratic challenger, ran on a platform advocated an immediately cessation of fighting with the so-called Confederate States of America.

Lincoln the incumbent stood for ending the Civil War by defeating the enemy on the battlefield. However, the incredible suffering seen on the battlefields of 1864 in Virginia and elsewhere fed a rabid anti-war sentiment in some Northern circles.

In Dauphin County’s anthracite fields, Lincoln was the clear favorite. With dozens of sons off fighting in the Union Army, residents sought to end the war and no retreat when so much had already been sacrificed. The military campaigns of 1864 had taken a heavy toll on this region. In the scheduled parade, local resident James Ferree was scheduled to speak. He lost a son, Sergeant James M. Ferree, during the fighting at Spotsylvania Court House on May 10, 1864. Sergeant Ferree was one of 10 local men in the 96th Pennsylvania Volunteer Infantry Regiment lost on that day.

And so they marched. A writer calling himself “Hector” described the scene in a letter published in the Harrisburg Evening Telegraph on October 14, 1864. 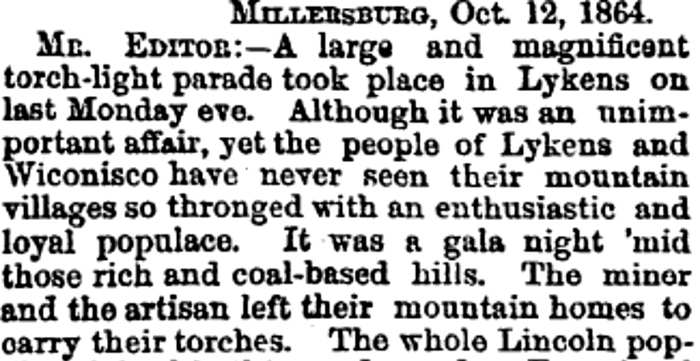 MR. EDITOR: — A large and magnificent torch-light parade took place in Lykens on last Monday eve. Although it was an unimportant affair, yet the people of Lykens and Wiconisco have never seen their mountain villages so thronged with an enthusiastic and loyal populace. It was a gala night ‘mid those rich and coal-based hills. The miner and the artisan left their mountain homes to carry their torches. The whole Lincoln populace joined in the grand parade.

Every loyal house along our route, from Lykens to Wiconisco, had brilliant tapers glowing in their windows. Ladies lined the sidewalks, the porches and the doorsteps, greeting us with cheers and the waving of handkerchiefs. Enthusiasm and love for Abraham swayed the moving throng. We were amused, as we passed along, at an old lady who had no light in her window, and for fear that we should think that she was a copperhead, she took the pains to tell all of us that her lamp was broken, and that she had no light to illume her window. We gave her three cheers, and concluded she was true to the “core,” and passed on.

When the procession had passed over its route, which ended at Mr. Hoffman’s hotel, a large and enthusiastic meeting was held, presided over by James Ferree, the silver-haired veteran. Prof. Dunbar addressed the assemblage. He discussed ably and fluently the great questions that agitate the country, and which the people are called on to decide in November. He was enthusiastically applauded throughout his facetious and eloquent oration. Mr. W.W. Jones was the leading spirit of the grand parade. The Millersburg delegation was there helping to cheer for “Old Abe” and the true-blue Andy. We had a good time, and we will long remember our trip to Lykens, and the kindness and cordiality with which we were greeted and entertained. Uncle Abraham will get his share of patronage in loyal Lykens. They are “stirring their stumps” for November. They are going almost en masse for the country.

It is too cold for “snakes, especially copperheads, in the old rotten tree of modern Democracy,” among those coal-field hills. The “Cops” have heard the voice of Indiana, Ohio and Pennsylvania, and have gone to their holes to wait for a summer sun to warm them into life. I am afraid their holes are in the iceberg of defeat, and no political sun shall ever shine hot enough to resuscitate them. More anon.
HECTOR.

In Wiconisco Township, the local jurisdiction surrounding Lykens, Lincoln collected 249 votes, defeating McClellan by 116 votes in the coal mining district. The October 10 parade in Lykens demonstrated the depth of support in the area for Lincoln and the Union war effort.

When it comes to examining the story of the American Civil War in the “upper end,” difficulties are encountered when it comes to finding detailed primary documents. Very little written in the region between 1861-1865 is available to the researcher.

One of the most prominent sources for these stories are the newspapers representing Harrisburg, Pennsylvania. Through the “Pennsylvania Civil War Newspapers” project at Penn State University, we have access to a drove of documentation on everyday life in coal regions of Upper Dauphin County.

Piece by piece, a picture of life in the region during the Civil War has begun to develop. Stay tuned as we continue to discuss and analyze these findings.

Sketch at top: “The Wide Awakes”