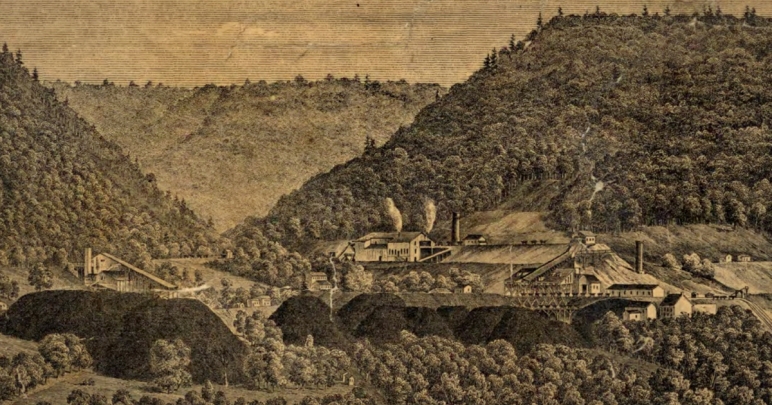 “The favorite fuel of Harrisburg.”

That’s how Mining Magazine described the famed “Lykens Valley” anthracite coal in an 1853 article. This easy-to-light heat source fueled the beginnings of the Industrial Revolution in Central Pennsylvania. And then the anthracite taken from the mines of the Lykens Valley and Short Mountain coal companies fueled the American Civil War.

The mines located above the Northern Dauphin County communities of Lykenstown and Wiconisco were very profitable by the time of the Civil War, supplying Central Pennsylvania and beyond with fuel to heat homes and drive the Union war economy. The Lykens Valley Railroad, which was tied directly to the owners of the mines, recorded hauling 184,600 tons of anthracite coal from the Lykens Valley in 1862 alone.

While the war years certainly helped establish the region’s economic prominence, something was amiss in 1863. The Lykens Valley Railroad reported only 141,000 tons of anthracite coal transported from the region. This is quite a significant drop in production from one year to another, especially during a time were peak production for war needs would have brought in large amounts of cash.

What could be the cause for such a precipitous drop?

The war had an unintended impact on the mining business in Wiconisco Township and throughout the Anthracite Region. Many of those who supported the war had gone off to fight in the Union Army. It just so happened that many of these men supported the Republican Party and its ideals of industry and free labor. Many of those who remained did not wish to join the war effort for political reasons – Democrats who opposed the war also wished to break some of the strength of industrialist Republicans who had a stranglehold over the anthracite region.

This drama played out in Schuylkill County during the war, prompting the state and Federal government to send troops to quell rebellion. Miners, many of them Irish, struck for higher wages, rallied against the war and the fought the draft with violence. This activity provoked strong-handed government action. While no evidence suggests that violence such as this occurred in the coal field north of Wiconisco, it does not mean there were not disruptions.

Two incidents occurred in 1863 that may have contributed to the fall in production, both of which could have had dire consequences not only for the men and women of the Lykens Valley, but for most of Central Pennsylvania and possibly the Union war effort.

The Daily Patriot & Union of Harrisburg reported this on March 20, 1863:

“Rumored Strike. — We hear rumors to the effect that the miners at the Lykens Valley coal mines are on a strike for increased wages, and fears are entertained that a riot will ensue resulting in the flooding of the mines and otherwise damaging the property of the proprietor, Mr. Harry Thomas, of this city. Sheriff Boas informed us yesterday that it was probable he would be called upon to visit the mines with a force sufficient to quell any riotous demonstrations that might be attempted, in case a compromise was not effected between Mr. Thomas and the strikers.”

The situation seemed perilous enough that the Dauphin County Sheriff found it necessary to bring an armed force with him to Lykens to potentially put down the riot. Apparently tensions eased, because the next day, the Patriot and Union reported:

“Settled.- We learn that the difficulty with the miners at the Lykens Valley coal mines has been satisfactorly adjusted, and that they have resumed work.”

Pressure still existed in mines of Wiconisco Township, leading to a similar incident two months later when miners again attempted to strike and were threatened with violence.

The Harrisburg Telegraph filed this report in their May 28, 1863 issue: 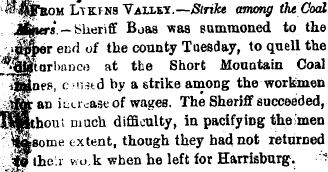 “From Lykens Valley.– Strike among the Coal Miners.”

“Sheriff Boas was summoned to the upper end of the county Tuesday, to quell the disturbance at the Short Mountain Coal mines, caused by a strike among the workmen for an increase of wages. The Sheriff succeeded, without much difficulty, in pacifying the men to some extent, though they had not returned to their work when he left for Harrisburg.”

The strike for higher wages at this moment in 1863 tells us a great deal about the miners and how they viewed their situation. They may have felt that this was a good time to press the issue for higher wages, because the work force was already strained by the loss of those who volunteered for war. This put the mine operator Henry Thomas in an awkward position, as he strenuously supported the war effort that reduced his workforce. Those who were left oftentimes supported workers’ rights or were new immigrants attempting to build a life in their newly adopted homeland.

The government’s response tells us much as well. The forces of industry and the Republican-led government in Harrisburg moved quickly to squash any labor insurrection. From Lykens to Pottsville and beyond, any moves made for workers’ rights involving miners were quickly squelched by police, militia, and later, by Federal troops.

While no major outbreaks of labor related violence took place in Wiconisco Township during the Civil War era, the same could not be said for neighboring Schuylkill County. In 1862 and 1863, violent attacks on mine operators there are considered by many historians to be the first blows struck by the so-called “Molly Maguires.” Violence only escalated in the aftermath of the Civil War, throwing the southern end of the Coal Region into chaos.

This post was adapted from a story originally posted on the Gratz Civil War Blog in June 2013.

Our new logo looks even better on ice! ❄️ #DowntownFrederick #FrederickMD #MDinFocus #AmericanCivilWar #CivilWar #HistMed #Museum
❄️❄️❄️
We are very excited about the National Museum of Civil War Medicine’s new logo. This has been months in the making, and I am thrilled with the final results! #Repost @civilwarmed with @make_repost ・・・ We are delighted to reveal the new logo of the National Museum of Civil War Medicine! #AmericanCivilWar #CivilWar #HistMed #HistNursing #USHistory #AmericanHistory #FrederickMD #DowntownFrederick #MDinFocus
Mid-1990s Jake loved all things racing. One of my favorite photographs from childhood. Rocking the Terry Labonte t-shirt and watching qualifying at Pocono Raceway. 🏁
%d bloggers like this: