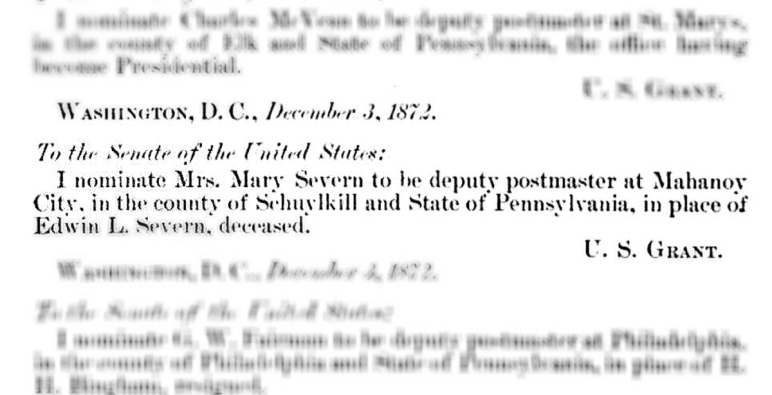 In the 19th century, the Federal government had very little impact on the lives of individual Americans. The exception to that rule was the role of postmaster – a position that was appointed at the Federal level and interreacted with Americans everyday in the communities where they lived. For much of the 1870s, the postmaster position at the Mahanoy City post office in Schuylkill County was held by Mary Severn, the wife of a disabled Civil War veteran who previously held the position. In a time when few women held this position, Severn became an integral part of her rapidly growing community.

Mary Wolfinger was born on September 17, 1839 in Pottsville, Pennsylvania. In the years before the Civil War, she married Edwin L. Severn, and the young couple lived with Mary’s family in Pottsville. Mary worked as a “tailoress,” while her husband found work as a carpenter in the Schuylkill County seat. With the outbreak of the Civil War, their lives were severely disrupted. Edwin raced off to Washington with the “First Defenders” in the immediate aftermath of Fort Sumter and later was commissioned as a lieutenant in Company K, 96th Pennsylvania. He served bravely and ably with the regiment through numerous battles and was promoted to captain of Company K.

The lives of the Severn family were forever altered on May 10, 1864. As we’ve previously documented on the blog, a Confederate artillery shell exploded near Captain Severn and several of his men just behind the lines at Spotsylvania Court House. The 96th Pennsylvania’s surgeon amputated Severn’s mangled right arm in a makeshift field hospital. Severn survived the dangerous wound and returned home to his wife and family in Schuylkill County.

In 1865, the couple moved to the emerging mining town of Mahanoy City in the northern part of Schuylkill County. Severn, despite having lost his right arm, found work and began playing an economic and civic role in his new home. He had taken up writing with his left hand, something his former regimental surgeon noted that he did very legibly.

The 1870 census found the Severn family living in a fine house on the eastern side of Mahanoy City. Edwin sold life and fire insurance while Mary maintained the household and raised three children – Anna, 10, Isaac (called by his middle name Harvey on the census), 4,  and William, 2. Two years later, Edwin was appointed postmaster of Mahanoy City by the President Grant. Edwin’s appointment should come as no surprise – he was an amputee and Civil War veteran who despite his disability, made himself into an integral part of his community. His appointment was dated January 18, 1872. It appears that Mary may have been serving as assistant postmaster. Edwin did not hold the position for long, however. 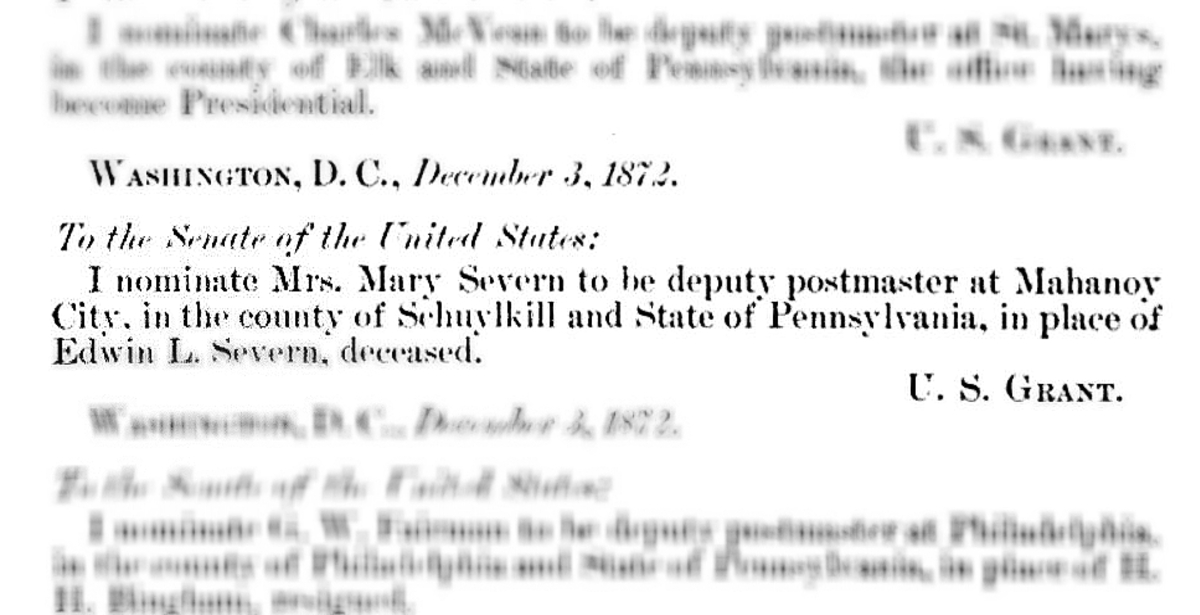 Captain Edwin Severn died in early 1872. Mary took up his work as postmaster, being recognized as postmistress initially in June 1872 and then appointed officially by President Grant in December 1872.

In her role as postmaster, Mary Severn held a vital role in the community. In an article for a National Archives publication, Claire Prechtel-Kluskens described the roles fulfilled by a 19th century postmaster:

The postmaster was to keep the post office open Monday through Saturday during the “usual business hours” of his town. When mail arrived on Sunday, he was to keep his office open for one hour or more after its arrival “after religious services” had ended.

The postmaster was to sort and bundle the outgoing mail in packages marked to expedite their way either directly to their destination or routed through the appropriate distribution office. Naturally, there was paperwork that had to be properly prepared and attached to the bundles.

The receiving postmaster also had to check the paperwork and the contents of the bundles to make sure none of the letters were under or over-charged. And there were quarterly reports to be made to the Postmaster General of the various types of mail sent and received, moneys received, and expenses paid.

For the next nine years, Mary Severn operated the post office on Main Street in Mahanoy City, fulfilling this important civic duty and keeping the mail flowing in and out of a bustling mining town. In 1880, the census listed Severn as “post mistress” and her daughter Anna as a clerk in the post office, likely serving as Mary’s assistant postmaster. The results of the 1880 election would upset the rhythms of the Severn family’s lives that had been maintained since Edwin’s death in 1872.

After the election of President James Garfield in November 1880, it was announced that the new administration was going to make a change in the Mahanoy City post office. This decision, though it is signed by President Garfield and his administration, was likely made by Republican Party officials at the state level. Replacing Mary Severn as postmaster would be Jacob L. Brick. This decision went down badly in Schuylkill County.

From the West Schuylkill Press of Tremont, Pennsylvania, February 5, 1881:

On Monday afternoon a petition for the appointment of Mrs. Mary Severn, as postmaster of Mahanoy City and a protest against the appointment of Jacob L. Bricker, signed by over a thousand names and measuring over 32 feet was sent to Washington.

The names of the best citizens of Pottsville and Mahanoy City were attached to it.

This is in addition to a soldiers’ protest of several hundred names and a citizens list which still remains open, and which will be sent after it in a day or two. These documents will be brought to the attention of the President in person and will also be shown in the Senate.

The group who made the biggest noise about this political decision were Schuylkill County’s Civil War veterans. Upon Captain Severn’s death in 1872, the Mahanoy City Grand Army of the Republic (GAR) Post 110 renamed itself the Severn Post in the officer’s name. The petition sent in by the veterans apparently had no impact. In April, at a meeting of the First Defenders Association in Pottsville, the topic of Mary Severn’s lost position as postmaster came up again and became the topic of several angry resolutions by the organization. Captain Severn had served with the First Defenders after Fort Sumter and was held in high-esteem by the group after the Civil War.

The annual meeting of the First Defenders’ Association was held at the office of H.C. Russel, Pottsville, on Monday evening…

The following resolutions, among others, were adopted:

Against the almost unanimous desire of the people of Schuylkill County, and the earnest protest of thousands of the most influential businessmen and soldiers, both individually and through their organizations, Mrs. Mary Severn, the widow of the gallant and lamentable Capt. Edwin Severn, a comrade whose life was sacrificed for his country, has been removed from the position of postmistress at Mahanoy City, which she capably filled to make place for a politician, therefore

Resolved, That all persons who use their political party and patronage for their own selfish purposes are deserving of the unmitigated scorn and contempt of all good citizens and soldiers.

Resolved, That the course of those representatives, who assist in the removal of soldiers’ widows and deserving soldiers, and give preference to rebel brigadiers, proves conclusively that their stereotyped resolutions, expressive of love, sympathy, and gratitude for the soldiers who saved the republic (which cost them nothing to have adopted at all political conventions) are mere devices to catch votes and must hereafter be so regard by all soldiers.

Resolved, That the action of Charles N. Brumm, Luther Keefer, and others who lent their aid and influence for the removal of Mrs. Severn, and also the removal of soldiers from positions, meets with our utmost contempt and we pledge ourselves that we will use all honest means to accomplish their defeat should they again come before the people…

The two politicians referred to in the First Defenders Association resolutions were recently elected Representative Charles N. Brumm, serving Pennsylvania’s 13th District in the House of Representatives and State Senator Luther Keefer representing Schuylkill County in the Pennsylvania Senate. These scathing resolutions suggest that there was a corrupt bargain among Coal Region Republicans to replace the long-standing postmaster with a political appointee to serve the patronage needs of these particular politicos.

As the resolutions also demonstrate, Mary Severn did lose her job in 1881. She moved to Pottsville in the 1880s and opened up a millinery shop at 113 West Market Street in downtown Pottsville. She operated the shop in Pottsville until 1895, when she retired and sold her stock of goods to Dives, Pomeroy, and Stewart, a prominent department store in Schuylkill County. She lived in Pottsville for several more years at 1109 West Market Street.

Mary Severn, the “postmistress” of Mahanoy City and the widow of Captain Edwin L. Severn, died at the home of her daughter Anna in Freeland, Pennsylvania on October 27, 1908 at the age of 69. Her remains were buried beside those of her husband at Charles Baber Cemetery. 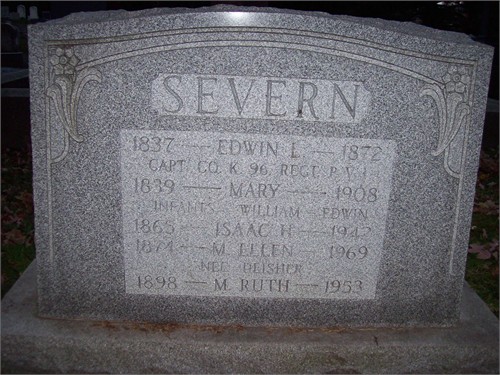 2 thoughts on “Mary Severn – The postmistress of Mahanoy City”