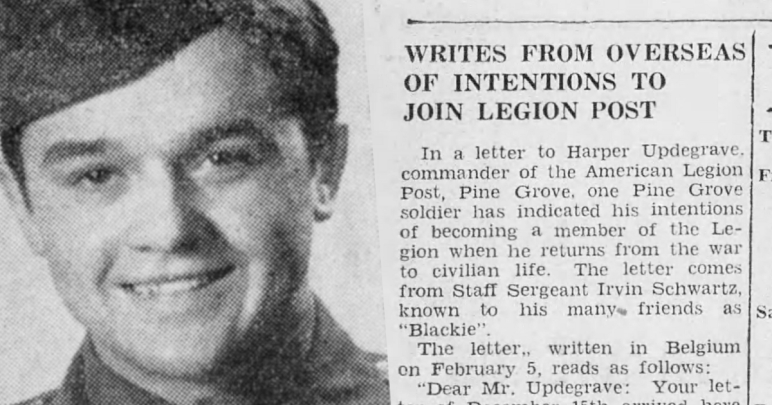 In February 1945, Staff Sergeant Irvin Schwartz took time to write home to a correspondent who knew all too well the horrors of a world war in Europe. Typing out his letter on a captured German typewriter, Schwartz addressed Harper Updegrave to return a letter that had been delayed in delivery to Schwartz by the Battle of the Bulge. The letter from Updegrave was mailed on December 15, 1944, but didn’t arrive at Schwartz’s 26th Regiment until early February.

Harper Updegrave was a veteran of the First World War, seeing action with the 4th Infantry Regiment, 3rd Division of the US Army from 1917 to 1919. Updegrave saw action on the Marne River, on the Aisne-Marne front, at St. Mihiel, and in the Meuse-Argonne offensive, all in 1918. These were some of the largest and deadliest engagements faced by American forces in the Great War. Shortly before writing this letter to Sergeant Schwartz, Updegrave had become commander of the Pine Grove American Legion Post.

While we don’t have Updegrave’s letter, Schwartz’s response, which was published in the Press-Herald at the end of February 1945, keys us in on the topics Updegrave brought up. These include high school sports and Updegrave’s new role as commander of the Legion Post. Updegrave also likely asked Schwartz to visit his comrades who perished in the Great War at one of the American cemeteries in France – a sad reminder of the earlier conflict that claimed thousands of American lives and failed to prevent another world war.

WRITES FROM OVERSEAS OF INTENTIONS TO JOIN LEGION POST

In a letter to Harper Updegrave, commander of the American Legion Post, Pine Grove, one Pine Grove soldier has indicated his intentions of becoming a member of the Legion when he returns from the war to civilian life. The letter comes from Staff Sergeant Irvin Schwartz, known to his many friends as “Blackie.”

The letter, written in Belgium on February 5, reads as follows:

Your letter of December 15th arrived here last night. It apparently was delayed somewhere along the way. I really appreciated it and I felt happy to read that you are still doing a grand job for all the boys and myself, by selling and buying War Bonds. You are really doing your part. Keep up the good work and all will be over soon.

I am more than positive that you are fulfilling your position as American Legion Commander in the most fitting manner. Congratulations. I will only be too happy to join upon my return home.

I am also pleased to hear that you take in my letters to the Press-Herald with a great amount of interest.

I read with interest your paragraph on your doings over here in World War I. As you probably know, I am not in the sector you referred to, but should I get there any time in the future, I’ll be only too happy to look for the persons you mentioned.

Sorry to read of that 21-19 loss to Lebanon Catholic, but during the past week or more I have of big victories we scored against Myerstown, Alumni, Reilly Township, and Branch, the latter two being League opponents. And Coach Pepe and the boys made a nice showing against veteran Port Carbon in losing 39-37.

Yes, according to all reports including the home-town paper, the community’s Rotary Club is still very active. I also wish I could spend an evening with you and tell you some of my every-day experiences. I know you would find it quite interesting. I hope that day isn’t too far off. Much depends on the current big Russian drive.

Mr. Updegrave, space is now running short, and I’ll be closing very shortly, but before, please excuse all errors, as I cannot type. I am not blaming this typewriter, because it’s a darn good machine, even though it is a ‘Jerry’ – Yes, we even take typewriters prisoners.

Featured Image: Irvin Schwartz in military uniform in 1944 and the headline from the Press-Herald.