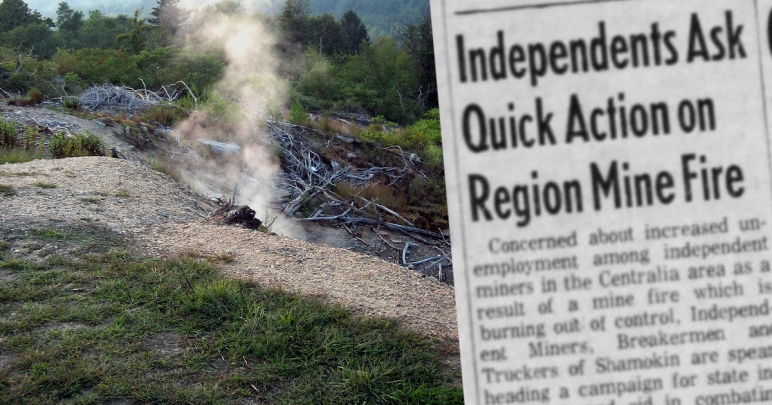 In the late summer of 1962, independent mineworkers in the vicinity of Centralia, Pennsylvania understood they had a major problem on their hands. And this escalating issue directly impacted the future of their livelihood. The growing mine fire beneath the Columbia County mining town threatened to destroy their future.

Months earlier, the borough of Centralia held an annual burn in its landfill, located at the bottom of an abandoned strip mine on the outskirts of the town. This took place after a town cleanup prior to Memorial Day festivities in May 1962. The garbage burn ignited a seam of coal at the base of the strip mine, and the fire took root in “coal pillars” directly beneath the community. Early efforts to extinguish the fire at the surface failed.

Later that summer, miners in the area were feeling the heat – literally. The fire was filling their workings with smoke, fumes, and heat, throwing them out of work. And in this report, shared with the Shamokin News-Dispatch on August 14, 1962, a local mineworkers’ organization warned that the situation in Centralia could significantly worsen if action wasn’t taken by Pennsylvania’s Department of Mines. The story is one of the earliest media reports on the Centralia Mine Fire.

Concerned about increased unemployment among independent miners in the Centralia-area as a result of a mine fire which is burning out of control, Independent Miners, Breakermen and Truckers of Shamokin are spearheading a campaign for state intervention and aid in combating the blaze.

Clarence E. Kashner, president of the local independent group, has contacted the State Department of Mines concerning action to extinguish the blaze. Kashner said 203 miners in the area are idled as a result of the fire which compelled 27 small mines to curtail operations.

Kashner said he had been informed by Lewis Evans, State Secretary of Mines, that his office has received permission from the attorney general to move swiftly in efforts to combat the blaze. Bids for the work, however, must be solicited.

Ordinarily, solicitation of bids, for this type of project must be advertised in newspapers, but Kashner has received assurance from Evans that the advertising provisions will be excluded in order to speed the project. The secretary’s decision to “cut corners” followed Kashner’s appeal to avoid red tape and get started immediately.

Kashner said the fire has been burning out of control since the latter part of May, and up until this time, no action had been taken to isolate or extinguish the blaze. The fact that 203 men already have been idled, and the possibility of more independent mining operations being closed as a result of the spreading blaze, calls for immediate action, Kashner declared.

Kashner said the Department of Mines hopes to begin work on the project next week. He added, however, it is questionable whether at this late date the fire can be eliminated entirely.

As the situation now stands, there is danger that the fire cannot be extinguished and many more men will be forced into idleness, Kashner asserted. He said the situation classified as a disaster case and more than 200 men may be compelled to go on the relief rolls in order to take care of their families.

Assemblymen John Stank and Adam Bower, Northumberland County, and George Heffner, Schuylkill County, have been contacted for aid in the case and all three have promised to lend their influence to obtain an early start of control projects, Kashner noted.

The independent miners feel that to cope with future problems of this nature, an emergency fund should be set aside to enable the department of mines to move immediately with a corrective project.

The fire is believed to have been started by a sanitary landfill project launched by the borough of Centralia, with permission of the State Department of Mines, Kashner said. He recommended that in opening landfills in the future, care should be taken to determine that mine fires of this type will not be started.

The pleas did result in efforts to put out the blaze that were unsuccessful. The fire soon spread beyond all control, despite numerous subsequent efforts to stop the fire’s spread. Twenty years later, the town began tearing itself apart as the fire’s impact was felt on the surface and in resident’s homes on the south side of town, directly above the raging inferno.

Today, the town is largely abandoned. Only a few residents remain. An empty grid of streets tells the story of the community once known as Centralia. As for the independent miners who cried out for assistance in extinguishing the blaze in August 1962, they were absolutely right about the dangers the fire presented to the community.

Featured Image: Smoke from the Centralia Mine Fire in September 2006 (Photo by Wikimedia Commons user Jrmski) and headline from August 1962 in the Shamokin News-Dispatch)

Want to learn more about the Centralia Mine Fire? Check out David Dekok’s book on the decades-long disaster.