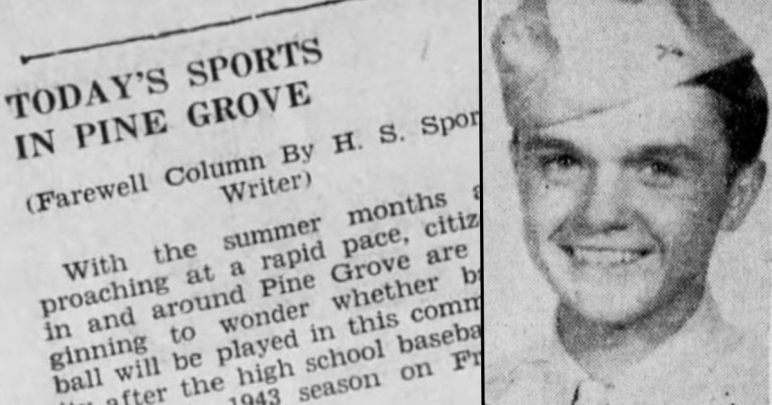 In May 1943, the West Schuylkill Press and Pine Grove Herald’s high school sports reporter signed off with a final column before heading off to fight in the Second World War.

The columnist was 18-year-old Pine Grove High School graduate Irvin Schwartz. A gifted writer and sports lover, Schwartz been writing the high school athletics column for the Pine Grove area when called up for military service in the spring of 1943.

His final column appeared on May 7, 1943. In the days that followed, he traveled to New Cumberland, PA from Pine Grove to begin his military service. This started a remarkable chain of correspondence between Schwartz and the newspaper where he worked as a sports columnist. The young writer would contribute more than 50 letters to the West Schuylkill Press over the duration of his service in the United States Army. These letters document the scope of experiences an American GI had during the Second World War written by the perspective of a Schuylkill County native and with plenty of references to his hometown and the friends he knew and loved.

With this column from May 1943 as a prologue, we will be sharing the letters Irvin Schwartz wrote home to the West Schuylkill Press and highlighting how these letters create a unique, local record of the Second World War.

His final column dives into the happenings in Schuylkill County sports from the perspective of Pine Grove. In it, he writes at length about the strain put on local sports by the armed forces and the war effort. Where typically four or five teams would play in the Pine Grove area in their own league, Schwartz points out that the area would be lucky to field one team to take on other towns across Schuylkill County. Schwartz also writes about Pine Grove athletes playing in college and on those who had already been gobbled up by the military.

With the summer months approaching at a rapid pace, citizens in and around Pine Grove are beginning to wonder whether baseball will be played in this community after the high school baseballers close their 1943 season on Friday, May 14.

Surely there will not be very much doing during the hot months of this year and Pine Grove sports followers feel this is just the right year to form one strong aggregation with the help of the past Pine Grove, Oak Grove, Irving and Sweet Arrow nines, all of which were strong outfits in their respective loops in former seasons.

Where are the players who would form this team? Right in the community itself. No one will disagree that stars such as “Ducky” Kline, Russ Keeney, Lloyd Keeney, Allen Umbenhauer, Luther Umbenhauer, “Danny” Aungst, Phaon Adams, Caleb Machamer, Jake Felty, Johnny Barr, Clarence Umbenhauer, Ralph Umbenhauer, Amos Zerbe, Oscar Zerbe, Stanley Klinger, Jerry Woods, Stewart Behney, and many other standouts can form one of the strongest clubs in the county this summer, and a group of Pine Grove’s many loyal baseball fans are all steamed up about this matter. Furthermore, the high school is producing some excellent diamond material which, by this summer, will be plenty good enough for a “big team,” as some of the current schoolboys, notably Ernie Klinger and Guy Heinbach, played for Oak Grove and Pine Grove respectively in fast company.

Other communities in the county, notably Minersville, are going ahead in the reorganization of their 1942 clubs which were tremendously hit by the armed forces, and a county league looks rather promising. Some well known county sports writers see a strong team in Pine Grove and something should be done about the same.

Pine Grove has the team, park, fans, uniforms, and virtually everything that is needed. Many of the prospective players are mostly married with dependents and so they do not face immediate induction.

Pine Grove has lost good athletes to the armed forces, but where there were four strong clubs as Irving, Pine Grove, Sweet Arrow, and Oak Grove campaigning during the same season, enough material must be and is left for a single club. It would keep the game alive and would keep these star athletes prepared for the after-the-war show.

So let’s break the milk bottle and watch an all-star team from the southwest end play out a schedule regardless how strong the opponent and regardless of how many games constitute the wartime card.

A number of Pine Grove athletes have lately made good in college and professional sports circles. Lamar Zimmerman, Russ Aungst, Guy Buch and “Boom” Zimmerman and several others have attained honor in the bigger sports world and are keeping the name of Pine Grove famous.

My own thoughts tell me that thus far Pine Grove wasn’t represented in the big league baseball world. But this same sentence cannot be published truthfully several years from today, because our own “Boom” is sure to land there shortly. We hope.

Frank Hiller recently made his 20th win in 21 games for Lafayette College of Easton. His only defeat came last season when Russ Aungst of Pine Grove beat him for the Bullets of Gettysburg College. Another star on the flag for Pine Grove. Aungst is now in the service, but after the war will reenter G-Burg which is expecting a great deal from him on the diamond.

Earl Monger is still on P.G.H.S.’s pitching staff and is still hustling too, but the youngest is pitching for dear old U.S.A. and at present is aboard a train enroute to the New Cumberland, Pa., reception center. Enroute on the train are at least 50% of Pine Grove High School’s 1943 baseball hopes. Monger is but a junior and Coach Pepe depended on him no little this season.

Pine Grove and Hegins are keeping up the tradition of having at least one of their two annual diamond fracases postponed by weather conditions. The game scheduled for last Friday at Pine Grove was set back by the weather man.

Now, good luck Pine Grove, and until every last German, Jap, and Italian is licked, just, So Long.