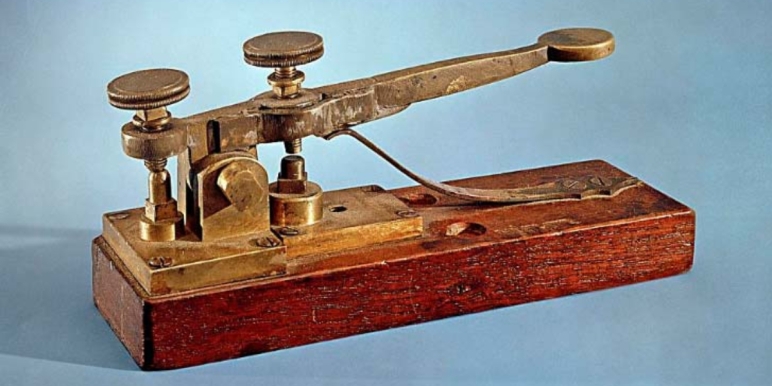 On a warm spring evening in 1847, a young engineer sat at a desk in Pottsville’s Pennsylvania Hall. He made constant adjustments to a small electrical machine made famous by Samuel F.B. Morse three years early – the magnetic telegraph. A wire passed out into the street and off into the distance hanging on crudely constructed wooden poles.

With this device, a message clacked in from Philadelphia, more than 70 miles away. The age of near-instantaneous communication had begun in Pennsylvania’s Coal Region.

First used in 1844 by inventor Morse to send a message between Baltimore and Washington, DC, the following years saw a dramatic change in the field of communication. This electronic text-message system used electrical signals to pass messages in what became known as Morse Code. Suddenly, cities that were hundreds of miles apart could communicate almost instantly. News traveled faster than ever before.

The exigencies of war-time had finally brought this machine to Pottsville in 1847. With the Mexican-American War in its second year and Schuylkill County soldiers fighting on the front lines in the conflict, the Miners’ Journal of Pottsville sought to quickly get news being received in Washington and Philadelphia.

In the early months of 1847, the first telegraph poles were being constructed to establish a communication link between Pottsville and Philadelphia. On the balmy evening of May 18, 1847, those wires became live and carried messages in “less than no time” from the City of Brotherly Love to the capital of the Southern Anthracite Coal Field.

On May 22, 1847, the Miners’ Journal reported its first war-time stories delivered by the telegraph. “Latest News from The Army” became a common headline in the Journal. The paper ran a description of the efforts to link Pottsville and Philadelphia and the interest it inspired in the Schuylkill County seat.

We have the satisfaction to announce that the Magnetic Telegraph between Philadelphia nd Pottsville is now completed – communication between the two places having been made on Tuesday evening last. But a few months have elapsed since the project of constructing the line was originated, but the enterprise has been pushed forward so vigorously, that little time has been lost in its construction. Much credit is due to those who had the superintendence of the line, for the promptness with which the work has been executed; and so far as we can judge, we believe it is one of the best constructed lines in the country.

Since Tuesday the office, which is in the lower story of the Pennsylvania Hall, has been constantly crowded during the day and evening with spectators anxious to witness the operation of an instrument which could send news in “less than no time” to Philadelphia, Buffalo, Pittsburg, or Petersburg.

Mr. Denny, the gentlemanly and skillful operator, has been fully employed in dispatching and receiving communications, and present appearance would lead to the conclusion that the stock would pay a handsome percentage. We have no doubt that the money expended in constructing this line has been profitably invested. The business between Pottsville and Philadelphia is so great, and of such a character as to warrant the supposition that a large number of messages will be transmitted daily.

It is our intention to make use of the Telegraph whenever we can do so with benefit to our readers – and the subscribers to the Journal may rest assured that they will be kept advised of the latest intelligence from the seat of war, up to the hour of putting the paper to press…

How was the telegraph received by the citizens of Pottsville who crowded around the telegraph operator to witness this incredible new piece of technology? On this point, the journalists of the Miners’ Journal are silent. But they did share a story from Pittsburgh, where the telegraph link between Philadelphia and Pittsburgh had been established only a days earlier than Pottsville. In it, the writer noted the skill of the telegraphers and the “wonders of the magnetic telegraph.”

Wonders of the Magnetic Telegraph

We had supposed that telegraphing, as practiced on the line from this city to Philadelphia, was as near perfection as the science would admit. – The writing by telegraph, as is generally known, is on a slip of paper. We saw, however, the operators at this office take off near 150 words on Tuesday night, of various messages from Philadelphia, by the ear alone!

The Instrument at this office was broken, and it was necessary to remove and repair it, but by the slight “tick” of the magnet every letter was distinguished and every word correctly reported on Tuesday night and yesterday.

By familiarity we have become so accustomed to the telegraph as to look on it, as we do on many other extraordinary things, without wonder. The sending of messages, however, by sounds so similar and so slight, is a new thing under the sun. We question whether the like has ever been done before – most assuredly it was never excelled.

The arrival of the telegraph in communities across America entirely reshaped the communications landscape and ushered in an era of rapid technological development. News spread faster than ever.

Developments in other areas – industrial production, transportation, printing – saw American life drastically change in the 1840s. These technological wonders made life more efficient. But they also caused rifts in the United States that shook the foundation of the country and helped set the nation on a course toward civil war.

One of the few perks of being a voter in Washington DC: I get an awesome “I Voted” sticker with Frederick Douglass on it. 🇺🇸✔️
Getting my battlefield fix 💣
Back to hiking ❤️
#PandemicHair #CountOlaf #Mugatu
%d bloggers like this: