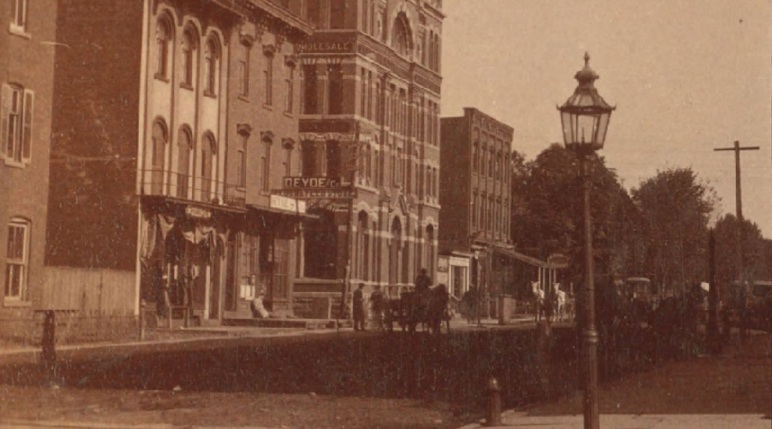 I stumbled across this vivid description of Scranton while engaged in recent research for PennCivilWar and thought it would be great to share!

This was written in the Pittston Gazette on January 24, 1861. When it was written, Northeastern Pennsylvania was suffering from a sudden economic downturn caused by the secession crisis of 1860-1861 as Southern states attempted to leave the Union. The fear of a coming civil war and uncertainty led to mass layoffs in industries across the North. Despite this, the Gazette’s piece still glowingly portrays the industrialization of Scranton.

A Trip to Scranton

On Saturday morning last, we jumped aboard the cars and went to Scranton, where we always find numerous and fresh evidences of enterprise. What gives to Scranton its fame and prominence is its great Iron business, its snorting engines, and its locomotive whistles, its forge hammers and steam pipes – all these, to make a long story short, are the result of that indomitable energy which characterizes the pioneers of that but recently wild and uninviting region.

Perseverance, it is said, removes mountains, and the assertion is verified at every step as one looks about him while in Scranton. When the Scrantons first commenced operations there the country was a wilderness, and like most pioneers of a new settlement they felt the inconvenience of a slim capital.

Yet the encouragement they saw in the future was great, and time has proved that “it was not all a dream.” The forests were felled, and the plough share struck deep into the virgin soil. Coal and iron mines were opened, and Furnaces and a Rolling Mill, erected. Capitalists, from New York caught a glimpse of the prospective greatness of the work so well begun, and they were not slow in advancing it by investments and influence. The result is familiar to every one.

Scranton is the most populous and thrifty town in northern Pennsylvania, and enjoys a larger number of operatives in the various departments of Railroading, Coal Mining, and Iron-making, than any other place in the State.

The elements of wealth having several years since been fully developed, the architectural appearance of the town next claimed its due share of attention. A bold stroke in this direction was the building of the Wyoming House, an establishment unequaled by anything of the kind in this part of Pennsylvania. Its fame extends far and wide, as does that of its worthy proprietor, Mr. J.C. Burgess. If you would give a stranger a good impression of any place, of any House, you must feed him well or it’s no go.

Mr. Burgess, not forgetting our old friend Kressler, now of the St. Charles, were about the first Hotel keepers of Scranton. They both performed their parts well. The demand for Hotels, after the Wyoming House was built, being still great, the “Forrest House” was built and first kept we believe by Mr. Rogers, and soon after purchased by Mr. Jos. Godfrey, its present successful and accommodating proprietor. The St. Charles was built by Cliff & Miller, we believe, and opened last summer by Mr. D.K. Kressler, who is now keeping it as much a favorite among his guests as in days past.

Among her Saloons, the “Hungarian” by Mr. Offner, is justly styled the lead. One must be careful here or the comforts will surely lure him to stay longer than he should – such places being intended for short calls, and pleasant while they last.

Foundries and Machine Shops abound in Scranton. The works of Dickson & Co. are not on the largest in town, but so far as we know, ahead of anything in the State, outside of the large cities – for miles the ring of their hammers on boilers reaches the ear. Their business is extensive and their jobs well done.

Merchandising is a heavy business in Scranton, and her merchants are well up to their business. The heaviest trade is of course done by the Store of the Lack. Iron & Coal Co., as it supplies most of the operatives of that concern. Mr. J.C. Platt has long been and is still the engineer of this mammoth establishment.

Striking out among the dealers in Provisions, we find the Messrs. G.A. & I.F. Fuller, D.B. Oakes, Schlager, Renshaw, and others.

The Messrs. Hunt Brothers are the heaviest Hardware dealers of the town. We were politely shown through their establishment consisting of three floors all heavily stored, and that with the most careful selections.

The Steam Mill of Patterson & Johnson supplies a large portion of the flour and feed of this region. The proprietors are men of great industry, nerve, and muscle, and drive things with a force that even the hard times cannot stop.

With the industrial boom that later came from the Civil War, Scranton ascended to even greater heights by the late 19th century. However, with the collapse of the anthracite industry in the mid-20th century, the economic vitality seen 160 years ago has receded markedly as communities across Northeastern Pennsylvania search for a new way forward.