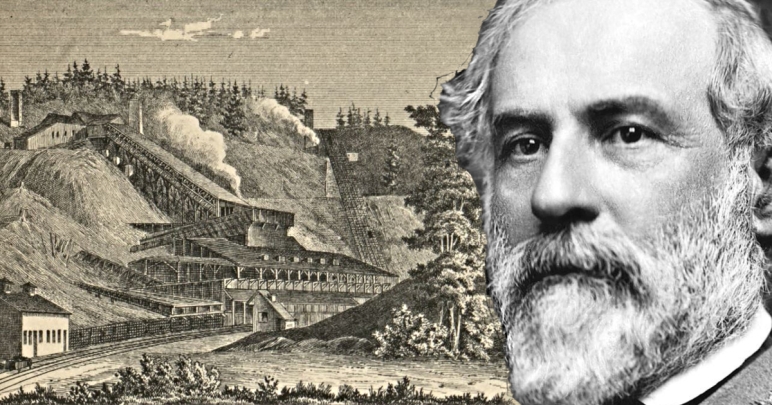 In late June 1863, Robert E. Lee’s Army of Northern Virginia closed in on the capital of Pennsylvania. Lead elements of the Confederate army were closing in on Harrisburg by June 30, engaging in combat with a small group of Union defenders just outside Camp Hill in what became known as the Battle of Sporting Hill.

But what if these soldiers hadn’t been recalled? What if the armies hadn’t met at Gettysburg and the Army of Northern Virginia continued its march deeper in Pennsylvania’s industrial heartland?

I don’t particularly like alternative histories or “what-ifs” as someone who strives to be the best historian possible. But a newspaper clipping lifted from the pages of the Richmond Whig and published in a Coal Region newspaper in July 1863 stopped me cold. The clipping from one of the Confederate capital’s chief newspapers appeared in the Pittston Gazette on July 16, 1863.

The paper’s editors included the excerpt from the Whig’s July 2, 1863 edition to illustrate the possible motives of Lee’s invasion and his objectives if his army ever reached into the coal fields of Eastern Pennsylvania. The Whig explored the idea that Lee should destroy the Coal Region’s industrial works and burn down collieries in an effort to shut down Northern industry by denying it fuel. “He may set fire to the pits [mines]… and and leave the heart of Pennsylvania on fire, never to be quenched until a river is turned into the pits, or the vast supply of coal is reduced to ashes,” wrote the Whig correspondent. 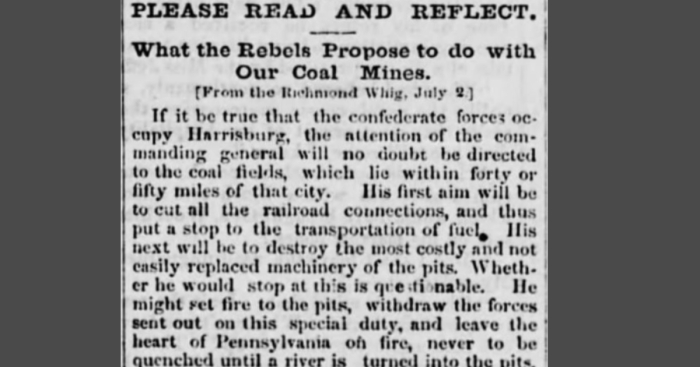 Here is the full clipping from the Pittston Gazette:

If it be true that the confederate forces occupy Harrisburg, the attention of the commanding general will no doubt be directed to the coal fields, which lie within forty or fifty miles of that city.

His first aim will be to cut all the railroad connections, and thus put a stop to the transportation of fuel. His next will be to destroy the most costly and not easily replaced machinery of the pits. Whether he would stop at this is questionable.

He might set fire to the pits, withdraw the forces sent out on this special duty, and leave the heart of Pennsylvania on fire, never to be quenched until a river is turned into the pits, or the vast supply of coal is reduced to ashes.

The anthracite coal is found in large quantities in no other part of the world but Pennsylvania. Enormous quantities are used in the United States Navy, the countless workshops and manufactories of the North, in the river boats and even upon locomotives. It cannot well be replaced by any other fuel.

The bituminous coal which is found near Pittsburg would not answer the purpose, even if it would bear the cost of transportation. Our troops already hold the railroads and canals leading from the Cumberland coal fields. All that is needed is to seize the anthracite fields, destroy the roads and the machinery of the pits, set fire to the mines and leave them. Northern industry will thus be paralyzed at a single blow.

These views may have induced General Lee to move upon Harrisburg. We doubt whether ho would fire the mines, but the destruction of the Mauch Chunk railroads and pit implements would be as legitimate as blowing up tunnels and aqueducts or burning bridges.

Of one thing we may be sure, that whatever is best to be done will be done by General Lee, and if he thinks fit to destroy the Pennsylvania mines they will certainly be destroyed. Should he leave them untouched it will lie for the best of reasons. But it is impossible not to indulge the hope that he will avail himself of the tremendous power which the possession of the coal fields, even temporarily, would confer.

Of course, this scenario never occurred. Lee withdrew his forces to Gettysburg in an attempt to destroy General George Meade’s Army of the Potomac. On July 2, as Richmonders were reading their copy of the Whig, Lee desperately attacked Union lines and failed to break them. He repeated the effort on July 3, destroying much of his army in the process and ending his great invasion of Pennsylvania. The Army of Northern Virginia slunk away from Gettysburg and retreated south to Virginia in the wake of the Battle of Gettysburg.

The editors of the Pittston Gazette published the Whig’s story about Lee’s intention to burn the Coal Region in an effort to show that this was a hard war. The Confederates were playing for keeps.

“We hope that this will be sufficient warning to all men who have hitherto been railing against the Administration – cursing the war, trying to prevent the draft, and persuading soldiers to desert from the Army,” wrote the Gazette, admonishing so-called Copperheads who opposed the war effort across the Coal Region.

Below is the full commentary as published in the Pittston Gazette on July 16, 1863:

The above being correctly copied from a leading rebel paper, is no doubt the programme that Gen. Lee would have carried out to the letter, if he had been successful in defeating our army in Pennsylvania.

In that event, hundreds of operators and thousands of operatives, who are depending upon mining coal for the daily bread of themselves and families, would have been ruined and left to starve. This is no fiction, no political story gotten up to work upon the feelings and sympathies of our people but a real fact.

The Rebels came into Pennsylvania for the great purpose of destroying our coal and iron interest, which to them would be worth more than the destruction of a hundred thousand of our soldiers in the field. Through the Providence of God and the bravery of our soldiers, that great disaster has been turned aside for the present, and we are permitted to go on in the even tenor of our ways. The army of the Potomac – the volunteers from other States and our own brave Militia, who responded so nobly to the Governors’ call, beat back the Rebel hords [sic], though at the cost of many precious and valuable lives, and have saved the best State in the Union from total destruction.

We hope that this will be sufficient warning to all men who have hitherto been railing against the Administration – cursing the war, trying to prevent the draft, and persuading soldiers to desert from the Army.

It is truly surprising that any party should allow their politics to lead them to oppose every measure taken to put down this awful rebellion. Had the North stood firm, and acted in concert, this war would have long since been put down. But a divided North leaves open ranks for the enemy to march in and destroy us root and branch, and we have just seen how ready they are to improve their opportunities.

Resistance to the Federal government’s conduct of the Civil War continued for the remainder of the conflict. To stifle this alleged sedition, the U.S. Army stationed a permanent garrison in the Coal Region to protect collieries and the men who ran them.

And so while the Confederate army never reached the Coal Region, the Pittston Gazette could not miss an opportunity to highlight the traitorous behavior of those in the Coal Region who opposed the war and its possible fiery consequences.