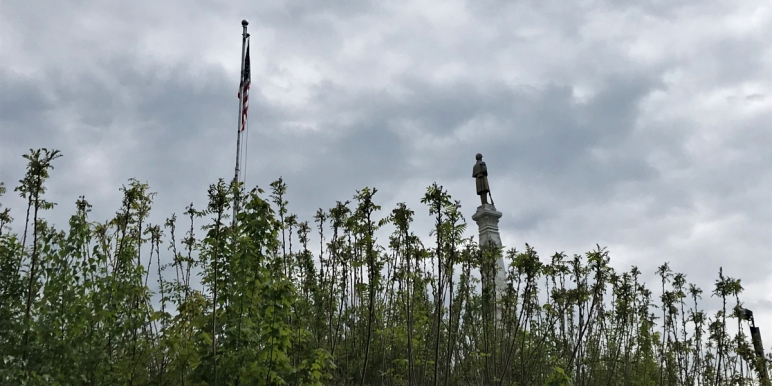 On a beautiful spring afternoon, my parents and I made a winding journey through Schuylkill County on the hunt for Civil War history. And while that may seemingly be difficult to do in a county that’s nearly 100 miles northeast of Gettysburg, we had some very good leads to chase.

Our travels brought us to the town of Port Carbon. This was only my second time visiting this community and my first time to actually explore the area. After winding our way from St. Clair to Port Carbon along the orange-coated banks of Mill Creek past the modern brewing facilities of America’s Oldest Brewery, Yuengling, Port Carbon came into view. Its streets tell the story of a Coal Region in decline.

Like dozens of other communities across Eastern Pennsylvania, Port Carbon fell on hard times in recent decades. With the death of large scale mining in Schuylkill County in the early 20th century, towns such as Port Carbon have struggled to find their footing in a rapidly changing world.

In the 19th century, the area became prosperous as a mining and transportation hub. Residents incorporated Port Carbon as a borough in the decade before the Civil War, a community with deep coal mining roots and was home to the first lock on the Schuylkill Canal, a transportation link that carried anthracite coal to market in Philadelphia.

Like other Schuylkill County communities, Port Carbon engaged in the war fever that gripped America in the wake of the Confederate bombardment of Fort Sumter in April 1861. By the end of the Civil War, more than 500 men from Port Carbon had served in the United States Army and had helped save the Union.

And this story is what brought us to this small Coal Region community. Two monuments in Port Carbon commemorate the soldiers from here who fought in the Civil War. They demonstrate a Northern community’s desire to remember the service and sacrifice of its residents in our nation’s bloodiest war.

Our first stop on the visit to Port Carbon can be more easily seen from the town’s main street than accessed.

The Port Carbon Soldiers Monument stands on a hilltop over looking Port Carbon. It’s quite a thrill when you passing down Market and Pike streets from north west and first get a view of the statue. It stands atop a high column, shining in the late afternoon sunlight. From downtown, we wound our way through back streets until we came to the backside of what used to be known as Goat Hill, but has since become known as Monument Hill.

This monument is a unique one. Generally, war monuments and memorials are placed near the center of town, near a government building, or in a cemetery. Pottsville’s Civil War monument in Garfield Square is a great example. Port Carbon eschewed this tradition and instead placed its soldiers monument high atop a hill overlooking town, making it an ever-present part of the town’s skyline.

We passed by an older couple working on their lawn and their home after we parked our car and began ascending a dirt road with a chain link fence. We walked for a few hundred yards uphill through the shade of trees before we emerge into the light near the summit. Ahead of us, the Soldiers Monument comes into view, and we realized how substantial monument really is. 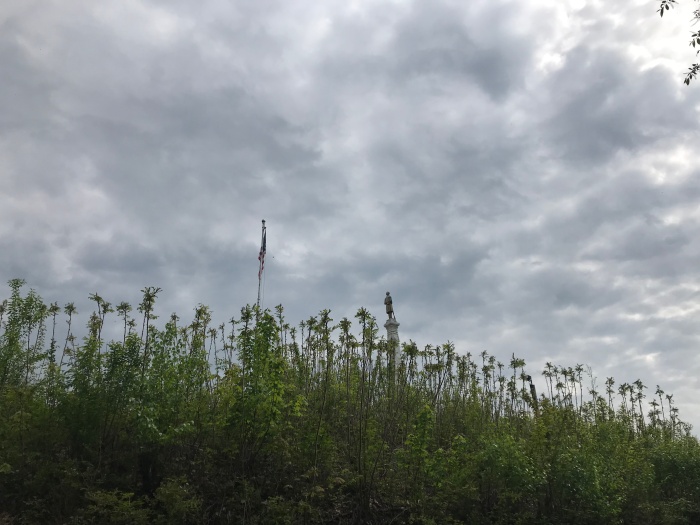 The pedestal stands 22 feet high and the 6 foot tall Union soldier stands on top. Both were constructed of zinc (which required a significant refurbishment in 2004). It was constructed by the Monumental Bronze Company of Connecticut. The company mass produced Civil War memorials and monuments for communities across America – North and South.

Along the sides of the monument are inscriptions of major battles where soldiers from Port Carbon fought and relief depictions of Abraham Lincoln and Ulysses S. Grant. On the face of the monument, directly beneath the Union soldier, an inscription reads: “Erected July 4, 1906 by a grateful people in memory of Port Carbon’s 513 heroes from 1861-1865.” 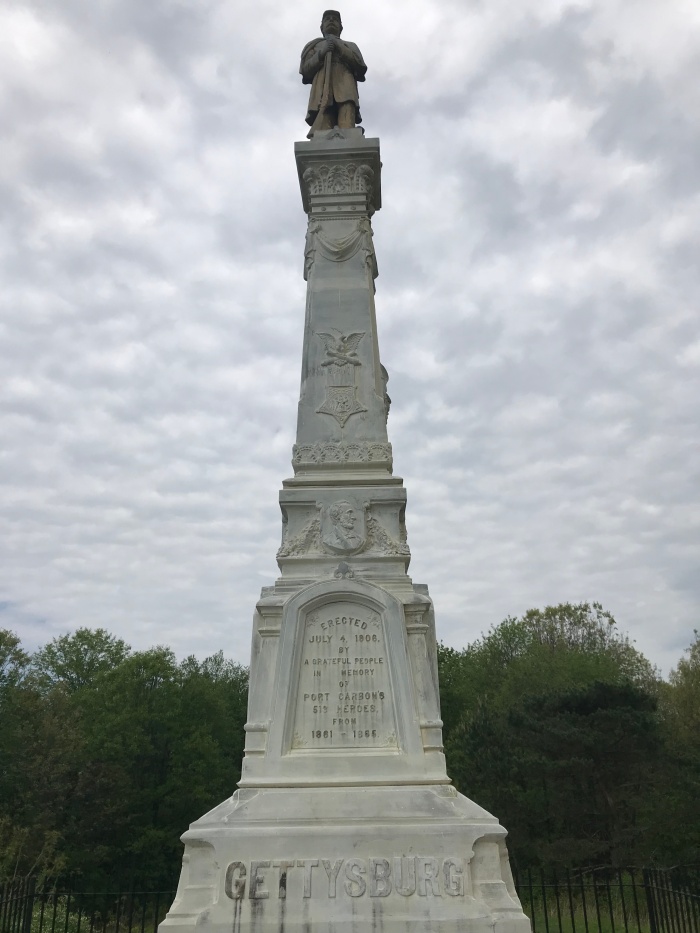 The statue is well-maintained and we admired the care that has obviously been shown toward the monument. The view from the statue is incredible. From the hilltop, we can see all of Port Carbon directly beneath us. To our left, we can see the homes of Palo Alto on the other side of the Schuylkill River. In the distance, Sharp Mountain rises up, but hills leave most of Pottsville out of sight.

If you are looking for a great sightseeing stop and want to see how a Pennsylvania community honored its Civil War veterans, you can’t go wrong with a visit to this off-the-beaten path memorial.

After descending Monument Hill, we moved toward our next stop in Port Carbon. We moved down residential streets and eventually came to the town’s Presbyterian Cemetery.

One of the thoughts that first struck me about this cemetery: there were an incredible amount of American flags flapping in the breeze. This cemetery is home to dozens of Civil War veterans who fought in some of the conflict’s worst battles.

We ventured to this cemetery looking for something specific – the Mother Allison Monument.

Erected two years after the Soldiers Monument, on July 4, 1908, this memorial stands atop the grave of Agnes Allison, a Port Carbon woman who lost four sons in service to the Union.

Allison came to Port Carbon in the 1850s from Scotland, according to research performed by historian John Hoptak. When the Civil War broke out in 1861, four of her sons joined the Union Army. All four were killed-in-action.

This moving tribute to Mother Allison, as she came to be known locally, has four flags placed at its base. Around each of the four sides, a plaque is located with the name of each Allison brother who died. A larger plaque is situated almost at the top of the monument which reads:

George Allison, killed at Spotsylvania, May 1864

The story has resemblance to that of Lydia Bixby – a Northern woman who lost several sons during service in the Civil War. A letter written from the White House was sent to Bixby in commemoration of her sacrifice for the Union. These words would have been a comfort to Agnes Allison as well:

I feel how weak and fruitless must be any word of mine which should attempt to beguile you from the grief of a loss so overwhelming. But I cannot refrain from tendering you the consolation that may be found in the thanks of the Republic they died to save.

I pray that our Heavenly Father may assuage the anguish of your bereavement, and leave you only the cherished memory of the loved and lost, and the solemn pride that must be yours to have laid so costly a sacrifice upon the altar of freedom.

The story of Agnes Allison may have provided inspiration for a Hollywood blockbuster as well. In 1998, Steven Spielberg’s Saving Private Ryan debuted to critical acclaim. It tells the story of a family who loses three sons during the Second World War and the rescue mission to save the fourth. The screenwriter, Robert Rodat, may have drawn inspiration from the Mother Allison monument. 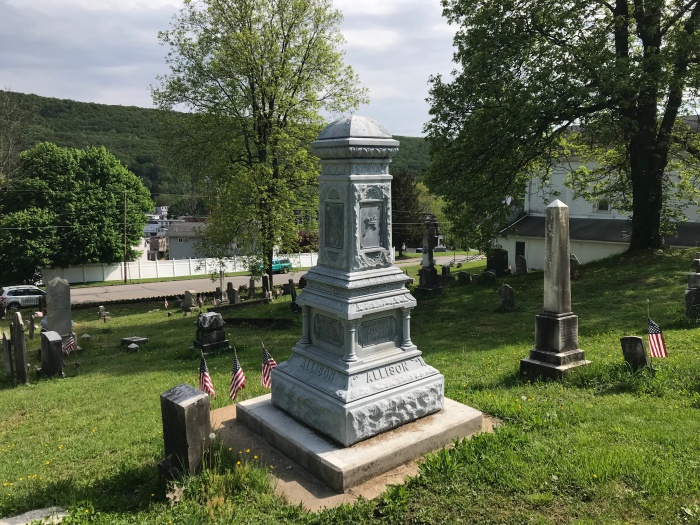 It’s a moving tribute to a mother who laid four sons on the altar of her adopted country.

At the end of our brief sojourn to Port Carbon, we packed into the car and headed for home. Our visit gave us a window into how a town honored its veterans and those who gave their last full measure of devotion on the battlefields of the Civil War.

Featured Image: Me (Jake Wynn) and my parents at the Port Carbon Soldiers Monument, May 2019