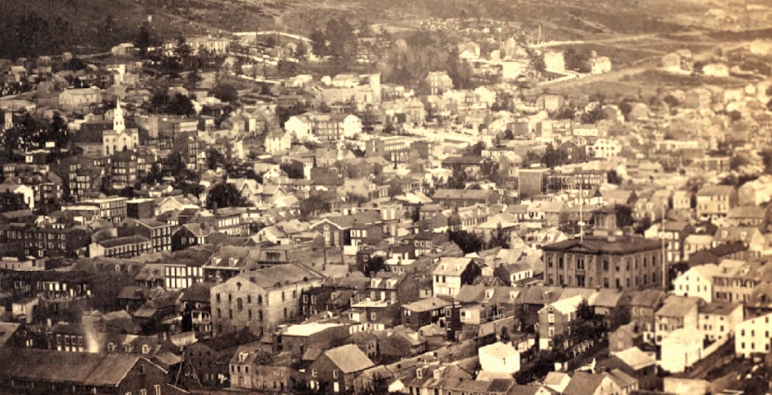 In the summer of 1864, tensions in the Coal Region were nearing a boiling point.

Throughout the Civil War, Schuylkill County had been both a major supplier of manpower for the United States Army and a bastion of anti-war, anti-government resistance. The events of the Civil War’s bloodiest year only worsened conditions for those living in this key industrial region of the North, an area that supplied the anthracite coal to fuel the engines of war.

The year 1863 had ended in violence in the Coal Region. Coal operator George K. Smith was murdered in his home on Schuylkill County-Carbon County border in November. Other events in 1863 had led Union military authorities to place a garrison of troops in Pottsville to stave off resistance movements, but also to threaten mineworkers in the event they attempted to strike for higher wages. That led to many hard feelings among those who disliked the Lincoln administration and the direction of the Civil War.

The battles that began in May 1864 in Virginia added to the anxiety of pro-Union families with soldiers on the front lines. General Grant’s Overland Campaign had begun with the Battle of the Wilderness on May 4 and led to nearly six weeks of continuous combat that left dozens of local soldiers in shallow battlefield graves. Many others were wounded or captured in the hellish fighting.

To the toxic brew of angst, anxiety, and grief, add the bitter politicking of a presidential election year. President Abraham Lincoln was up for re-election in a contest that everyone knew would shape the final outcome of the war.

On June 24, 1864, these emotions exploded in an incident on Sanderson Street overlooking downtown Pottsville. Clemens Ackerman and the wife of a Union soldier got into a bitter battle that spilled out onto the streets and inspired neighborhood women to violence.

On Tuesday last a man named Clemens Ackerman who owns a house on Sanderson Street, in which the wife of Mr. William Hoffman, a soldier of the 7th Pennsylvania Cavalry resides, threw her furniture out because she was in arrears to him for rent a trifling amount. Mrs. Hoffman, who is a respectable, industrious woman, with unfortunately two sick children at present, said that she would pay him at the end of the month; but he persisting for immediate payment, she offered to pay the amount at once.

This in a passion, he refused, and threw the furniture out as stated, and even the medicine of the sick children. The affair so incensed the loyal women who live in the street that they resolved in mass meeting, to thrash Ackerman, and replace the furniture. The resolution was carried out so effectively that the unreasonable, hard-hearted, Copperhead landlord fled for his life, and Mrs. Hoffman again placed in possession of that premises.

It may be stated that the landlord had not the slightest warrant of legal authority for throwing out Mrs. Hoffman’s furniture. The women of the street claimed a Union victory, and subsequently raised flags in commemoration of it. They call the engaged “Battle of Sanderson Street.”

Mr. Hoffman is a re-enlisted veteran of the 7th Pennsylvania Cavalry, and his wife is an estimable woman, very punctual in the payment of her debts, and unworthy of the treatment she received at the hands of Ackerman. Viewing all the circumstances, the verdict of the community is “served Ackerman right” for his brutal, unmanly treatment of a soldier’s wife.

On Tuesday, Ackerman was arrested, charged with assault and battery on Mrs. Hoffman. He had a hearing before Squire Reed, and was held in $500 to answer.

They followed up the story in the next week’s editions, updating readers about a new twist to the story.

Sequel to the “Battle of Sanderson Street”

Clemens Ackerman, the Copperhead landlord who distinguished himself in an unenviable manner last week by assaulting Mrs. William Hoffman, a soldier’s wife, and then throwing in the street her furniture, the medicine of her two sick children, and even the dough that Mrs. Hoffman was about to bake into bread, and who for his brutality was taken to account by the patriotic and humane women of Sanderson Street, has added to his infamous conduct by preferring a charge of assault and battery against the woman, and nine of them have been held in the sum of $200 each to answer.

We think that Ackerman received a less severe punishment than he deserved.  A man is capable of acting as he did towards the wife of a veteran soldier, is unfit to live in this community, which though disgraced by the presence of a few Copperheads of the Ackerman stamp, is loyal to the core. Shame upon the brute. Let his name be mentioned only with scorn and contempt.

There are no additional updates to the story and further research has not yet uncovered the final result of the case.

But the “Battle of Sanderson Street” provides a fascinating example of how the Civil War spilled over onto the streets of the Northern home front. Especially in the coal fields of Eastern Pennsylvania, the bitter politics surrounding the conflict fueled infighting among neighbors and occasionally turned violent.