As a crippling and divisive coal strike held the Coal Region in its grip in the autumn of 1900, the editorial team at the Lykens Register began writing a series of essays decrying the economic inequality impacting the working class in America.

At the southwestern edge of the Anthracite Coal Fields, Lykens became a scene of turmoil as its miners and laborers went on strike in September 1900. A neighboring community, harboring resentment from the failure of a previous strike, took active measures to undermine those striking in northern Dauphin County’s mining district.

Across the Coal Region, workers argued whether to strike or not. In Lykens, the Register quoted miners as striking for “a semimonthly pay, reduction in the cost of supplies, and an increase in wage when there is an increase in price.”

As America entered the 20th century, its citizens were in turmoil. A Gilded Age saw industrialists and capitalists rise to unimaginable wealth, enjoying lives of splendor while vast swaths of the growing nation wallowed in poverty in the shadow of steel mills and in the black dust of collieries. Their road to fortune and power was paved by the actions (or inaction) of the Federal government. The political machines of the Gilded Age were fueled by the money and influence of industrial and banking titans.

The editors of the Lykens Register decided to address the issue of inequality in an editorial written on September 27, 1900. In doing so, they addressed many of the issues that were already boiling over and creating an era of agrarian populism and progressive politics. 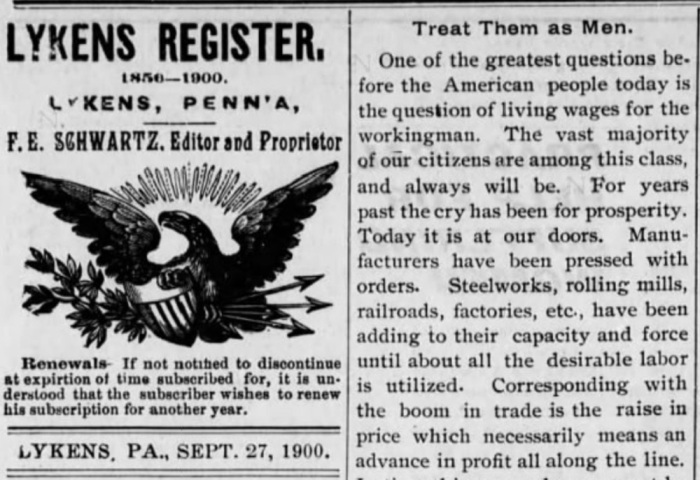 Treat Them as Men.

One of the greatest questions before the American people today is the question of living wages for the workingman. The vast majority of our citizens are among this class, and always will be. For years past the cry has been for prosperity. Today it is at our doors.

Manufacturers have been pressed with orders. Steelworks, rolling mills, railroads, factories, etc., have been adding to their capacity and force until about all the desirable labor is utilized. Corresponding with the boom in trade is the raise in price which necessarily means an advance in profit all along the line. In time this same advance must be paid for by the consumer, who in most cases is the workingman.

But has the workingman received his advance? No!

Then is it not reasonable for them to ask for it? Surely the greedy capitalist will not give it unless it is asked for. To ask for it individually has been tried and failed. To ask collectively in small sections has failed. A concerted movement is now being tried. Whether it will be a success or a failure is yet to be found out.

One thing is sure. Before the matter will be settled a board of arbitration will likely consider the differences, and in all probability settle them. If a labor commission would have been created by the government to consider the grievances this strike and its accompanied loss to capital and labor would have been unnecessary.

To get back to our subject, we will suppose the men are granted the increase which under existing trade conditions they deserve. It will mean that the fathers can support the family without the aid of his boy, who can then go to school. To others it will help wipe off a mortgage and prepare fathers for old age. To the young man it will be assistance to build his own home. To others it will mean added comforts in the existing home.

In a thousand ways, through many channels, it will find its course to the capitalist and manufacturer again, bringing them increased trade and profits. Give the workingman a chance to rise, and it will mean the lifting up of that standard of liberty which God intended.

There is plenty for all to live well if those who control the finances of the world just avoid that extreme selfishness so common to man. The grand part of the thought is that through their liberality they shall in turn reap a harvest which would otherwise not have appeared.

Sadly, the editorial is as relevant today as it was in September 1900. Forget the mines, steel mills, and railroads that built incalculable fortunes in the late 19th century. Today, a new gilded age has been initiated by venture capitalists, investment bankers, and Silicon Valley titans. And just as in the first Gilded Age, the Federal government has taken up the cause of big business.

But looking back to the first decade of the 20th century, we can see movements that inspire action. Two years after this editorial was published, miners in the Anthracite Region struck a landmark agreement negotiated by the United Mineworkers of America with the backing of the Federal government. The Great 1902 Coal Strike ushered the Progressive Era into the Coal Region and saw some of the excesses of coal operators reeled in and the initiation of some protections for workers over the following decade.

Now, as was true then, there remains much work to be done.

Featured Image: “Breaking and loading coal in mines after a blast has knocked it down, Scranton, Pa., U.S.A,” New York Public Library.

Want to read more about these issues in the Pennsylvania Coal Region? Check out this story from Anthracite Unite