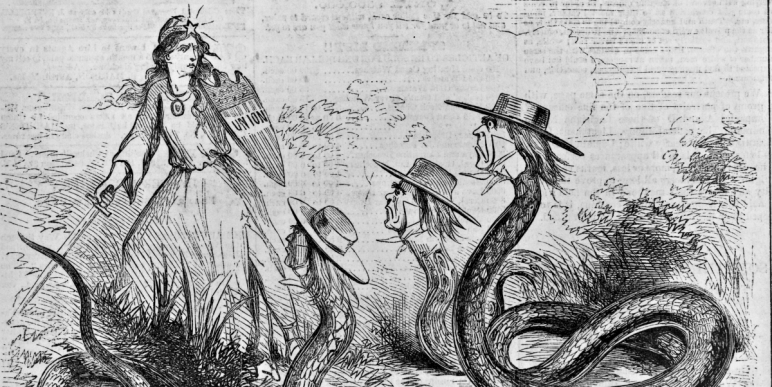 While the Civil War raged on battlefields in the South, the simmering political conflict in the anthracite coal fields of Pennsylvania continued to stew in the spring of 1864.

Soldiers from the coal towns of Schuylkill County participated in the bloodiest fighting of the conflict that spring, in battles that have become synonymous with the worst of the American Civil War – the Wilderness, Spotsylvania Court House, Cold Harbor, Petersburg. But back home, a different battle took place, pitting supporters of the Union government led by Abraham Lincoln and the Republican Party against anti-war Democrats known as Copperheads.

In previous years, anti-war sentiment in Schuylkill County and other areas of the Coal Region had boiled over into open rebellion and widespread violence. A failed uprising in October 1862 just northwest Pottsville had caused severe headaches for the Lincoln administration, just as they were dealing with significant military and political problems tied to the battlefield performance of their most important army, the Army of the Potomac. With the onset of conscription in 1863, violence against Federal and state officers became common in isolated areas within Schuylkill County, leading the Federal government to put a  garrison of Federal troops in Pottsville for the duration of the conflict.

Tensions in the Coal Region reached new highs as electoral season approached in 1864, as anti-war Democrats eyed an opportunity to bring down the Lincoln administration and Republican Party control in Harrisburg. This led to a series of incidents across the county, including a violent attack on a pro-Union newspaper in the eastern Schuylkill County community of Tamaqua.

A former officer in the Union Army operated the Anthracite Journal, a newspaper that supported the policies of the Lincoln administration and earned the ire of Democrats in the mining and industrial town. Captain Robert Leyburn, the newspaper’s proprietor, had served for 9 months as an officer with Company E, 129th Pennsylvania and saw heavy action at the Battle of Fredericksburg in December 1862.

The attack on the Journal took place on the evening of June 11, 1864, just as preparations were underway for the printing of the next week’s edition. The Miners’ Journal of Pottsville detailed the attack and its ramifications for politics in Schuylkill County on June 18, 1864.

Copperhead Outrage in Tamaqua – Destruction of the Printing Material of the “Journal.”

On Wednesday night, 11th inst., after a long course of persecution and cowardly threats against the “Journal” published in Tamaqua, this County, and against the person of the editor, it culminated in an attack upon the office.

The place was broken into after the “first Side” had been worked off, and the entire newspaper department was totally wrecked. The cases containing type were upset, the type being mixed together, and scattered in confusion over the floor. The advertising “forms” were broken into pieces evidently with hammers. The material is rendered worthless, except as old metal. The ruffians did not destroy the jobbing department, or the loss sustained by Mr. Leyburn would have been much heavier.

As it is, however, he has suffered considerable pecuniary loss by the outrage, but good Union men and friends of the cause have stepped forward, promptly and offered to subscribe liberally, and Mr. Leyburn will still continue the publication of his staunch Union paper.

Mr. Leyburn’s sole offence is, that he speaks fearlessly in defence of the Government and in opposition to the efforts of traitor to overthrow the free institutions of this country. His position annoys the Copperheads of Tamaqua and vicinity, and they thought by the attack to suppress the Journal. But they reckoned without their host, for the insulted and outraged Union citizens of Schuylkill County will not only protect Mr. Leyburn in his rights as a citizen, but sustain him in the future with increased zeal and liberality.

Every thoughtful man will note in this occurrence the difference between the law-abiding, Union citizens of this County, and the Copperhead rebel-sympathizing men who disgrace us with their presence.

For months and years the English and German Copperhead organs in this place have printed falsehood upon falsehood in reference to the objects of the war; have used vituperative expressions when speaking of our soldiers in the field; have grossly misrepresented the acts of the Administration, and with the utmost license of abusive language, assailed every man who acts with the Union party. This has been, is yet done, by these wretched publications, and although they richly merit it, no hand is raised to punish the men who use the columns of these papers for selfish, wicked purposes. The sentiment among loyal men is, let healthy, intelligent public opinion punish these traitorous sheets. And this is the correct plan.

We heartily approve its adoption. We merely refer to the matter to exhibit the difference between the Union and Copperhead elements of Schuylkill County.

Were the Rebels and their allies, the Copperheads, to triumph in this war, a tyranny of the most absolute character, would rise in this country upon the ruins of freedom. No man nor journal would dare express a sentiment that was not favorable to human slavery, while our white workingmen would be lorded over by an aristocracy of slaveholders that despise what it terms “greasy mechanics,” mud-sills,” and “poor white trash.”

Every intelligent workingman should ponder these facts, and we can have no difficulty in deciding where his proper position is in this contest against slave-holding rebels, for Freedom. The logic of facts is inexorable.

The harsh language and rhetoric that appear in the Miners’ Journal are representative of that seen throughout the summer of 1864 as the Presidential election loomed. The battles for hearts and minds in the Coal Region carried on through the end of the war and carried on into the years of Reconstruction before eventually boiling over during the labor violence and ethnic strife of the 1870s.

Featured Image: A political cartoon from the February 28, 1863 edition of Harper’s Weekly. The cartoon is entitled: “The copperhead party – in favor of a vigorous prosecution of peace!” – Library of Congress