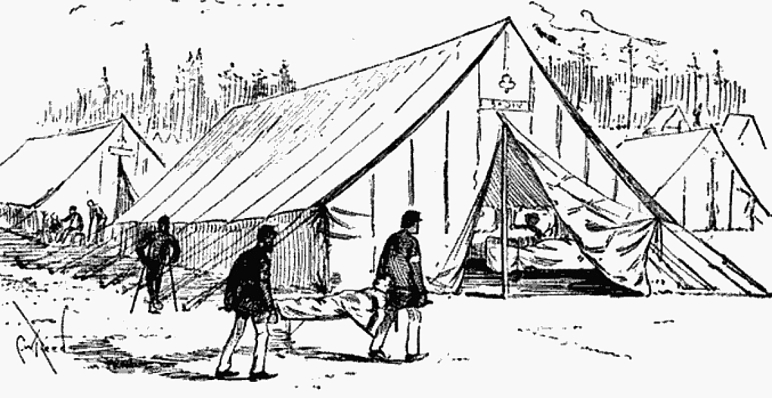 In the cold and gloom of a war-time winter in Pennsylvania’s capital, a soldier began penning lines to detail the heartrending sights around him. As 1861 gave way to 1862, men huddled in their tents for warmth from the bitter cold. Around them, a great army encampment coughed, sneezed, and complained of stomach pain. Disease had reached its cruel hand over the huge concentrations of soldiers at Camp Curtin.

The soldier, a 25-year-old schoolteacher from Bedford County named Samuel Veatch, eloquently turned his comrades’ final words into poetry. His unit, Company D of the 101st Pennsylvania Volunteer Infantry, had been mustered into the United States Army on December 6, 1861 and been shipped to Harrisburg for organization and training.

In these cold days of 1861 and 1862, Private Veatch took up a solemn duty to record the last moments of Privates John Ruby, John Oler, and Jacob Deffibaugh. The three soldiers died over a five-day span inside Camp Curtin. His words were published in the Bedford Inquirer on January 24, 1862:

The Dying Soldier’s Address to his Comrades.

Written from the words of John Ruby, a member of Captain Compher’s Company, and a citizen of Rainsburg, Bedford Co., Pa., who died in Camp Curtin, Harrisburg, Dec. 30th, 10 o’clock, A.M.

Brother soldiers! I must leave you,
Death is preying on me now;
All my toils on Earth are ended,
All my battles fought below.

I must join a nobler army,
Where King Jesus takes command,
Where there’s music more melodious,
Played by the celestial band.

When the spirit leaves my body,
Send the relic to the place,
Where first I met you, brother soldiers,
That it there may rest in peace.

In my quarters are some pictures,
Bury them along with me;
They are mementoes of some loved one,
I no more on Earth will see.

Soldiers, now I’ll have to leave you;
Though your company is sweet,
But may Christ at last receive you,
That we may in Heaven meet.

No friend was there to shed a tear,
When Oler passed away;
No friendly hand to smooth his hair;
No tongue to chant a lay.

He died amidst the camp’s vast noise,
The soldiers’ mirth and glee;
Around him rang the hearty voice,
In many a jovial spree.

The bugle, drum and fife was heard,
In many a broken sound;
But of a psalm no single word,
Was uttered in the round.

No mother’s tear dropped on his cheek;
His lips, no sister pressed;
No kindred voice was heard to speak;
No relative caressed.

A youthful volunteer he came,
His country’s rights to save;
But death lay hold his tender frame,
And dragged him to the grave.

His battles now on Earth are fought,
His last great victory’s won;
The wreath to crown him now is wrought;
He rests in peace at home.

What mournful tidings greet my ear!
Another soldier gone!
No relative to linger near,
To hear his dying moan!

He came with us, a volunteer,
To meet the traitorous foe;
And to defend our country’s flag,
But death has laid him low.

No friend had he to shed a tear,
Around his dying bed;
But be forgetten shall no he,
Although he’s with the dead.

His brother soldiers think of him,
With sorrow in their hearts;
And grieve that one so brave, so true,
Should from them thus depart.

We miss him at our quarters now;
We’ll miss him in the field;
For he can never meet the foe,
Since death has made him yield.

Private Veatch’s brief lines provide valuable insights into the mind of a young volunteer soldier who just watched his tent-mates succumb to disease, which was all too common in the sickly winter of 1861-1862. Thousands were falling ill and dying in Union army camps from Harrisburg to Washington.

The poet-soldier’s own luck ran out in August 1862. Private Samuel Veatch died from wounds received in the summer of 1862 at Hammond General Hospital in Point Lookout, Maryland. Like the comrades he memorialized in poetry in January 1862, he never returned to his native Bedford County.