Small groups of people gathered on sidewalks across the city of Pottsville, Pennsylvania on Saturday, April 15, 1865. They whispered and spoke in concerned, hushed tones and discussed the frightful news darting across the telegraph wires from Washington. Telegrams delivering the shocking news that President Abraham Lincoln had been shot at Ford’s Theatre on the previous evening sent the city into a state of disbelief.

“Confirmation of the melancholy news caused incredulity to give way to grief,” the Miners’ Journal wrote, “the sorrow was universal. Many shed tears, and prayed that there might be some mistake.”

In the seat of Schuylkill County, a jurisdiction that had sent the better part of its youth to fight and die for the Union, news that the leader who had brought these men to victory had been shot down filled their hearts with despair. A witness recorded the scene after the confirmation of the president’s death at 7:22 a.m., April 15, 1865:

Sadness was visible in every face, and men gathered in groups to talk with bated breath and recount the noble qualities of Mr. Lincoln. Business was suspended, doors and shutters were closed, flags were half-masted and craped, and almost every house in town was draped in mourning… The sorrow was deep and universal.

The grief sweeping across Pottsville and reaching the far-flung corners of Schuylkill County stood in stark contrast to the celebrations that came with the delightful news that the Civil War was coming to an end with a string of stunning victories by the United States Army.

Less than a week before President Lincoln’s assassination, news came to Schuylkill County that General Robert E. Lee’s Army of Northern Virginia had been surrounded at Appomattox Court House, Virginia and forced to surrender to Union forces.

In Tamaqua, a mining and industrial community roughly 18 miles northeast of Pottsville, the surrender of Lee “was celebrated with much spirit” on April 13, according to one correspondent. “Stores, workshops, and places of business were closed, and everybody turned out to honor the great achievement of our brave soldiers. In the evening the town was beautifully illuminated.”

Business leaders in Pottsville came together on the evening of April 13 to begin plans for a grand celebration of Union victories for Monday, April 17, 1865. A city lawyer, B. Haywood, urged the “all Loyal citizens to abstain from all business on that day.” Schools planned to be out of session that day to help mark the occasion. A former Union Army officer, James Nagle, was appointed as marshal for the parade. They published their plans for the April 17 demonstration on Good Friday, April 14, 1865.

The line of procession will be formed at 2 o’clock, P.M., on Monday, right resting on Callowhill Street, facing west, in the following order:

Band.
Returned Soldiers of this War.
Soldiers of 1812 and Mexico.
36 Young Ladies representing States of the Union.
Odd Fellows.
Other Civic Associations.
Fire Department.
Delegations from Workshops and Mines.
Citizens of Foot.
“Young America” on Foot.
Citizens on Horseback.
Citizens in Vehicles.

The Procession will move over the following Route:

The parade will then be dismissed and an Oration delivered. During the moving of the Procession, one hundred guns will be fired, and it is expected that all the bells in the Borough will be rang during the firing. It is also desired that all persons procure a miniature National Flag to carry in the Procession, and as many large Flags and appropriate Banners as can be obtained.

Associations and delegations arriving will report to the Chief Marshal at the Union Hotel, who will have places assigned for them.

Assistant Marshals will be mounted, and to be designated, will wear a red military sash across the right shoulder and a baton.

What was planned was arguably the biggest celebration in Schuylkill County’s history never came to pass. For on the night of April 14, 1865, actor John Wilkes Booth shot and mortally wounded President Abraham Lincoln in the presidential box at Ford’s Theatre in Washington. One of the soldiers who carried the stricken president to the Petersen House across the street from the theater came from Schuylkill County.

Over the solemn, chaotic Easter weekend, new plans for a demonstration were made. This time they were meant to honor the martyred president.

In the momentous days following Lincoln’s assassination, the war-torn nation turned its eye toward the hunt for the conspirators who had killed the president and severely injured Secretary of State William Seward in an attempt to decapitate the United States government. John Wilkes Booth leapt to the Ford’s Theatre stage after firing the fatal bullet and disappeared into the cold, foggy April evening. Rumors flew about the assassin’s whereabouts and his ultimate destination.

One theory, with some validity, put Booth on trains bound for the North and possibly an illegal border crossing into Canada. At the time, this idea carried some weight as numerous attacks directed on Northern communities by Confederate agents had originated in the British territory. Many of these train lines passed straight through the Coal Region and a Booth look-alike was spotted traveling from Reading through Schuylkill County. The unidentified man was arrested at Tamaqua and held until it was later proved he was not in fact John Wilkes Booth. The assassin was later cornered in a tobacco barn in Virginia, and was mortally wounded by a soldier’s bullet.

A Schuylkill County soldier, Captain Jacob Haas, was also famously mistaken for the infamous actor and threatened with mob violence on numerous occasions in the aftermath of the Lincoln assassination.

But as the nation mourned, and Schuylkill County prepared for its grief-inspired demonstration, some in the county’s more rebellious jurisdictions marked the death of the president in more controversial fashion.

A correspondent from Tremont, several miles west of Pottsville, complained that residents there “have not paid proper respect to the memory of our late Chief Magistrate.” The editor of the Miners’ Journal, Benjamin Bannan, wrote in response that “we can well believe there are malignant copperheads there as well as here who take no pleasure in paying any respect to the memory of a man who in life they vilified and abused.”

A different correspondent from the Miners’ Journal warned those with “Copperhead” attitudes to stay away from the “loyal and intelligent portions of Schuylkill County.”

He ominously wrote: “For though strong and brave men wept when they heard of our good President’s death, the gleam of rage was seen to sparkle in the eyes of the more excitable. They were in no humor to hear their words of insult…”

The resentment in some mining districts in the county toward the president and the government stretched back to a failed uprising by Irish laborers in the autumn of 1862. With Lincoln gone and the Civil War at a close, their campaign of violence in Schuylkill County turned toward local mine bosses and company officials.

The following Wednesday, April 19th, Pottsville was “plunged into the depths of mourning.” Huge crowds came out to parade the streets and collectively grieve for the president.

Men and women wept as the marched along, the signs of grief apparent as they marched along streets draped in black bunting. The crowd carried aloft signs, posters, and wreaths bearing different sayings, which the Miners’ Journal dutifully republished the signs in their April 22 edition:

A Nation mourns a Father slain.

Abraham Lincoln, today, First in the Hearts of His Countrymen.

Dead, on the Borders of the Promised Land

Abraham Lincoln – His Blood shall be the Cement of the Union, and the Seed of a great, regenerated, o’er mastering Republic

We mourn the Martyred Chieftain of our Holy Cause.

The Nation Mourns a Patriot Fallen.

He was a Man, take him for all in all, we shall not look upon his like again.

“But if this country cannot be saved without giving up that principle, I was about to say. I would rather be assassinated upon this spot than to surrender it.” – Abraham Lincoln, Independence Hall, Feb. 22, 1861.

At 10 o’clock in the morning, a parade of bands, returned soldiers, officers, and citizens marched through the streets to the Union Hotel, led by Captain James Wren. At the hotel, ministers from Pottsville’s churches gathered and addressed the crowd.

Later in the day, the city’s African American population paraded. “They bore the American flag, and seemed deeply impressed by the great loss their race has sustained in the death of Mr. Lincoln,” wrote the Journal.

In neighboring Minersville, citizens also gathered that solemn Wednesday and marched through their streets behind a band playing funeral marches. A correspondent in the community recalled the events of the day and attached a series of resolutions passed by a committee in that town upon the conclusion of the parade in the afternoon.

“[T]he common verdict of mankind, as well as of the future historian,” wrote the committee of Minersville’s business community, “will hold the sympathizers with treason, whether North or South, and all the aiders and abettors of Rebellion as… guilty, not only of the blood of our illustrious and martyred chief… but guilty of the blood of the hundreds of thousands whose graves mark every battlefield of the war…”

In the weeks that followed the parades and the funeral processions marking the death of Abraham Lincoln, the Confederate armies remaining in the field surrendered. With the end of the war, the painful memory of the horrors of April 14-15, 1865 gradually grew less excruciating. As soldiers returned from the bloody battlefields and political haggling over the Reconstruction of the Union began, the citizens of Schuylkill County returned to rebuilding their lives in the aftermath of the war.

Yet, the legacy of the Lincoln assassination among the mining towns and villages of Schuylkill County long remained. Thirty-five years after the assassination, the Miners’ Journal pointed out that many residents of the county still held onto a memento from the mournful days of April 1865. “Copies of the issue containing the announcement of the assassination of Lincoln are still in possession of many of our residents,” wrote the Journal on April 18, 1900. “The likeness of the martyred President is surrounded by a deep mourning border.” 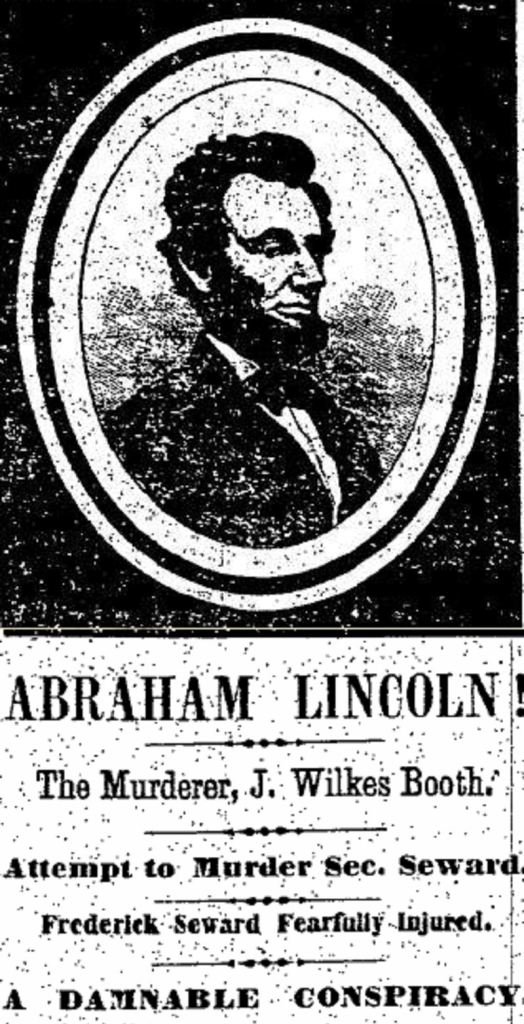