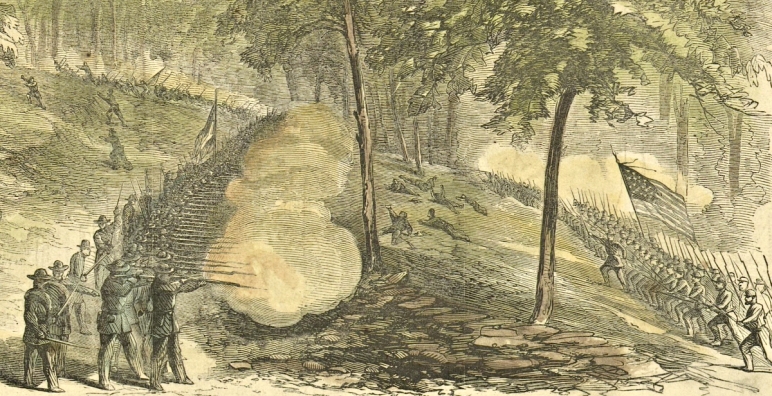 On September 14, 1862, Union and Confederate forces engaged on the slopes of South Mountain in Maryland. The battle, little remembered today, set the stage for the bloodbath on Antietam Creek three days later.

In this crucial engagement on a gorgeous Sunday, the young men of the Coal Region in the 96th Pennsylvania played a starring role. They engaged the enemy near the small village of Burkittsville just below the crest of a mountain pass known as Crampton’s Gap. They engaged well-positioned Confederate infantry and took heavy casualties but ultimately helped turn the tide and secure a victory that evening.

The regiment’s role in the Battle of South Mountain has been well-documented by historians like D. Scott Hartwig and John Hoptak. Check out their incredible books HERE and HERE.

But I’m interested in the experience of the individuals in Company G, 96th Pennsylvania. These were the young men who hailed from mining district of Wiconisco Township in Dauphin County and the rolling farm country of Berks County. Here’s what they expereienced during the battle for Crampton’s Gap on September 14, 1862.

Sunday, September 14 – Fine day. Moved at 5:30 a.m. Crossed a mountain [Catoctin Mountain]. Passed through Jefferson. Rested in a field near the outskirts. Loaned $15 of Capt. Filbert. We were sent forward as skirmishers to unmask the Enemy. Marched bout three miles and then deployed until we came within a half mile of Burkittsville. The Enemy shelled us for two hours, no one hurt. We lay in the road parallel to the mountain [South Mountain]. While we lay, the men of B and G Companies stole milk, hams and preserves out of a house. At 2 P.M. we were ordered back to the Brigade. We marched through a cornfield to the rear and then behind the hills to the Brigade, the Enemy shelling us as we retired.

Pass through a ravine to the extreme right, then crossed over about six fences in line of battle. Came up and laid down and rested a few minutes, shells flying close.

General Bartlett came up and ordered us to charge. Went into action at 5 p.m. Charged over the fence into a meadow and cornfield. The fire was terrific. Crossed the field and drove the “Rebs” clean up the mountain. Rested on the mountain all night. We gave them hell after we had them on the jump up the mountain.

INCIDENTS: I made a narrow escape, the top of my canteen was shot off and knocked me down. Major Martin and Lt. Dougherty were killed. Ed. Moyer took a prisoner and gave him to the Colonel. One “Reb” shot at me out of a house as I crossed the fence. I had him in tight papers. I took him prisoner. Our Regiment bore the brunt of the fight. Our opponents were Cobb’s Brigade. Very cold. Slept wihout rocking. Had marched about 20 miles.

Sunday, September 14, 1862.  This morning our regiment was sent out as skirmishers.  We advanced slowly until in the afternoon about two o’clock we arrived at Burketsville [sic[, Maryland, and near the foot of South Mountain where we halted, the Rebels meanwhile shelling us from their positions on the mountain.  About three this afternoon we were ordered to join our division which we did immediately.  We then marched up through a ravine, and out of sight of the Rebels, until we were opposite Crampton’s Pass when we were ordered to charge, our regiment on the extreme right our troops on the left charging at the same time. The Rebels were in a line at the foot of the mountain behind a stone fence, and when we were within a short distance of them, they gave us a deadly volley, and a great many of our poor boys fell, but the survivors pushed on and routed the Rebels, and drove them up and over the mountain but darkness prevented us from following them farther than on top of the mountain.  We came down to the road in the pass and halted for the night.  Major Martin of our regiment was killed.  The following of our company (G) were wounded:  John Kaercher, in thigh or hip; Ben Weaver, Joel Bird, Joshua Workman, John Grimm, John Strausser, Israel Strausser, Abe Straussser, Lewis Fretz, and M. D. Ferry were all slightly wounded.  Thomas Haines was seriously wounded in the body.  U. D. Ferree had just joined us from the hospital this morning.

Monday, September 15, 1862.  Traveled over the battlefield.  It is an awful sight.  The Rebels were lying thick around the pass and in our front where we were engaged.  Wrote a letter to father.  Poor Thomas Harris died this morning from the effects of his wounds.

Three days later, Company G witnessed horrific fighting at Antietam on September 17, 1862 but did not actively participate. However, two 18-year-old soldiers from the company were killed during the engagement. Frank Treon and McCoy Sargent were mortally wounded when a Confederate solid shot struck them. They were the only casualties from the 96th Pennsylvania in the Battle of Antietam.

Captain Haas diary comes from the USAHEC in Carlisle, Pennsylvania

2 thoughts on ““We gave them hell” – Company G, 96th Pennsylvania in the Battle of South Mountain”