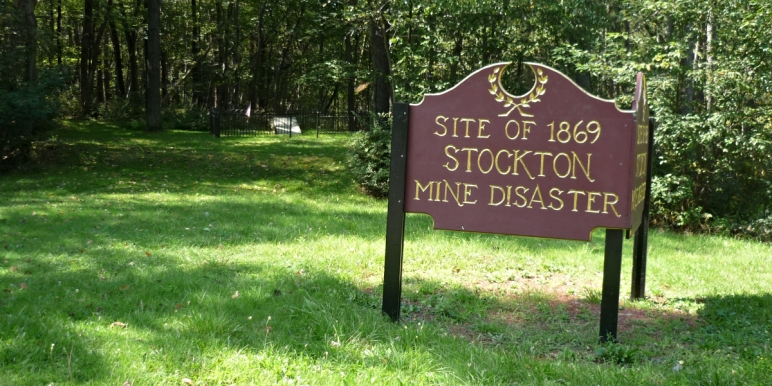 On December 18, 1869, one of the most unusual mining disasters to ever befall the anthracite coal fields of Pennsylvania took place on the outskirts of Hazleton. In a small mining village called Stockton, multiple homes collapsed into a mine cave-in created by miners working too close to the surface.

Six people were killed when the buildings plummeted into a hole later estimated to be at least 400 feet deep. The victims were killed while they slept, as the disaster took place in the early morning hours. The crushed remains of the buildings caught fire when stoves inside were overturned in the collapse.

A vivid description of the disaster and the resulting memorial constructed on the site comes from the May 23, 1925 edition of the Plain Speaker newspaper published in Hazleton, Pennsylvania.

TO DECORATE SPOT WHERE 6 PERISHED

On Memorial Day, delegations of old soldiers will pay their annual visit to Stockton to lay flowers on the common grave of six persons, one of them a veteran of the Civil War; all six of whom died in a night of horror December 18, 1869, when the mines caved in and carried their two homes into workings 600 feet deep, with rescuing parties driven back by successive falls of surface and by the flames which arose from the wreckage, ignited probably by an overturned cook stove.

[Editor’s Note: At this point the newspaper makes a major error. The veteran who died at Stockton was Isaac Rough, who served with the 28th Pennsylvania Volunteer Infantry from 1861-1865. A year earlier, in May 1924, the Plain Speaker properly identified the veteran, writing: “Hazleton military orders today ornamented the last resting place of Isaac Rough, Civil War veteran, whose body is buried 400 feet deep, probably the only case known where one of the boys of ’61-’65 awaits the call of Gabriel’s trump so far below the surface.” A military grave marker today sits atop the site of the disaster, adjacent to the marble slab mentioned in this article.]

The veteran was George Swank, who was born in 1819, and who went through the four years’ fighting against the south to die with his 19-year-old son William in the Stockton mine disaster four years after he had been mustered out. He was a widower and he and his son were batching it in the home that was engulfed.

In 1869, Stockton mines were among the biggest in the anthracite region and Stockton had seven districts to make up the community. At midnight December 18, 1869, three of the levels caved and as they were pyramided one on top of the other, they went down immediately, taking the surface with them, right where the homes of the Swank and the Rough families stood. Next to the two affected houses was the residence of John Wetterau. His little girl Mary ran back into her home to get a new hat and as, she was within the vacated dwelling, part of it went into the cave-in, taking her with it and imprisoning her under the wreckage. Stockton miners, headed by Stable Boss Hugh Conahan, afterwards one of Hazleton’s leading builders and a State Hospital trustee, were lowered into the abyss and worked on top of the burning wreckage to free the child. The men suggested that her leg be cut off so that she could be rescued but Conahan ordered ropes brought, had them tied to the tangled timbers and as workers on the surface lifted the beams, the girl was pulled out. She lived to be a grandmother and two of her grandchildren are Mrs. H. E. Fassnacht, wife of the United Evangelical clergyman at Fleetwood, Pa., and Mrs. E. D. Snyder, wife of one of Hazleton’s leading businessmen.

As for the Swank and the Rough victims, it was agreed by all that they were dead but the miners of the region, with that characteristic determination that is found among men of their craft, were unanimous that the bodies must be recovered and they worked for weeks in an effort to reach the bottom of the wreckage. The primitive fire engine Hazleton owned was hauled to Stockton and played water on the embers of the fire for three days until no more smoke arose. But fresh caves all the time narrowly missed imprisoning the rescuing parties and finally it was decided that the dead could not be reached. The hole was filled up and a marble slab placed over the spot. Surrounded by a battered iron fence and surmounted by a big oak tree, with a lilac bush in front of the enclosure, the memorial is a spot often visited by those who have heard of the disaster of 1869 when a whole community expected a similar fate stood by its guns and labored to rescue those who had met such a terrible end.

When the marble slab was erected, it was decided that there should be no description of what had happened for all felt the story would never be forgotten. Beneath the names is the simple termination “Who Died December 18, 1869.” The decision was based on sound premises for the northeastern Pennsylvania miner and his friends need no details of the catastrophe all persons seem to know it.

Today the little burial ground is the only cemetery in the place. It was never consecrated and only a disaster made it what it is for the coal company never provided a burial grounds for the miners and their families and all funerals from the place wend their way to Hazleton, a mile away. Within a few feet of the northern edge of the iron fence, starts a giant cave-in that extends to where the earth is gashed by a stripping of the proportions of the Panama Canal cuts. To the south are more caves. Yet nature, gravity and industry all seem to respect the spot where the six Stocktonians crashed in their beds to a swift death of fire and suffocation.

Every Memorial Day, the Hazleton old soldiers visit the enclosure, there is a Memorial Day address, the decoration of the slab with flowers, the placing of Old Glory on the metal star erected by the side of the marble marker and the crash of muskets with “Taps,” over what is claimed to be the deepest land grave in which any old soldier of any war sleeps his last repose. Six hundred feet is estimated as the depth to which the bodies of the Swank and the Rough families descended when they met their deaths in 1869.

Featured Image: Site of the Stockton Mine Disaster (Find-a-Grave)

5 thoughts on “Remembering the Stockton Mine Disaster – December 18, 1869”