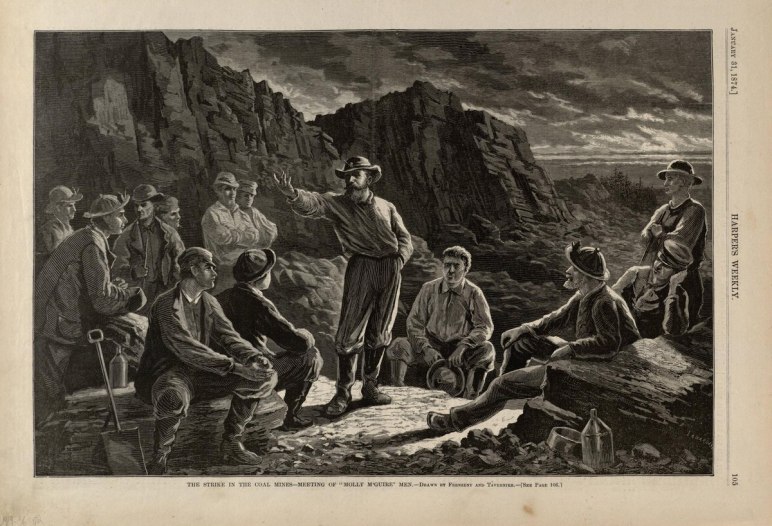 “There is apparently no law in Schuylkill County,” wrote a resident of Schuylkill County in the pages of the Boston Globe in October 1873. “Within the past week three murders have been committed, but this is considered comparatively nothing.”

The early 1870s marked a pivotal moment in the history of the southern Coal Region. In the years after the Civil War, the first labor movement in the anthracite coal fields began under the leadership of Irish immigrant and miner John Siney.

Franklin Gowen, president of the Philadelphia and Reading Railroad, began his machinations to create America’s first monopoly by dominating the coal trade in Schuylkill County.

All the while, a wave of crime swept across northern Schuylkill County, leaving the towns of the Mahanoy Valley in chaos as murders, assaults, robberies, and arson became so commonplace as to barely merit a mention in local newspapers.

As these issues heated toward the boiling point, stories began to appear about the conflicts brewing in the southern anthracite fields.

In an October 1873 letter to the Boston Globe, an anonymous resident of Coal Region addressed the rampant crime occurring in the area. In it, he parroted a conspiracy theory that gained wide circulation in the 1870s across Pennsylvania and the Mid-Atlantic states.

This conspiracy theory was built around ethnic discrimination against the Irish working class. The theory held that a shadowy organization known as the Molly Maguires secretly held power across the Coal Region, using that power to bump off rivals and anyone who stood in their way. This organization, built upon a similarly named group from back in Ireland, sought to dominate the Coal Region by force.

Frank Gowen later used this conspiracy theory to insert a private police force and Pinkerton Detectives into Schuylkill County, creating circumstances by which dozens of men were rounded up and placed on trial. More than 20 were executed by the close of the decade.

Here is the letter published in October 1873, laying out many of the tenets of the Molly Maguire conspiracy theory:

The Modocs of Pennsylvania Operations of an Organized Hand of Desperadoes. Past and Present

A Reign of Terror and How it Originates-Possibility that United States Troops May be Called Upon, Some Day, to Dispose of the Outlaws.

Accounts have sometimes reached the outside world of the depredations of the “Mollie Maguire’s” in the Schuylkill County anthracite coal region, but nothing has ever been said as to what the “Mollie Maguires” are. Having been in the region, and met persons who are well-informed upon the doings of the Mollies, I have obtained some information which, no doubt, will prove interesting to the readers of The Globe.

The “Mollie Maguires” now called the “Modocs of Pennsylvania” are an organized body of desperadoes, the membership ranging between 500 and 1000, the operations of which extend throughout the coal regions, from Northumberland to Luzerne County. The former leaders of the gang are now languishing in durance vile, through the instrumentality of Judge Rockafallow of Northumberland County; but other scoundrels are leading, and with them the gang carry on their work of murder and plunder, but not quite so extensively as formerly.

The horde have head-quarters at Locust Gap and near Mahanoy Plane, two dark-looking places in the Broad Top Mountain. The scene of the principal dark deeds of the Mollies is at Shamokin, Mahanoy City, Shenandoah City, Ashland, Girardville and Mount Carmel. These places have frequently been subject to a perfect reign of terror by the gang, have been afraid to and the citizens appear upon the streets, so powerful and murderous were the intents of the Mollies.

Mr. E. Wilvert, editor of the American, Sunbury, Penn., was followed by one of the murderers for a long time, purposely to murder him, and this is but one of similar instances of the same character. There is a regular system of Ku-Klux messages and signs used to intimidate the people, and unless attention is given to them by those to whom they are sent, they are soon made victims. What is known as a “Mollies’ notice to quit,” consists of a coffin and cross-bones placed upon the door of a citizen’s house with chalk, and notifying him to leave the region in twelve hours. Unless the occupant takes the advice he is silently “put away.”

Subjoined is a notice recently sent to Joseph Reese, inside boss at the Philadelphia Coal Company’s colliery, near Shenandoah City:

SHENANDOAH. Mr. Bugger: If thee do want to keen thv life thee must give up thy job and go to work, and then thee will be safe, but not else. Thee hast been boss long enough. If thee do not take this warning it is thine own fault it – lies for thee. We will give thee a month from now, and mind, it will come on thee from that on. So that thee hast made a fool of thyself to throw the balls that Captain Hays made for thee, and thee could not see it. Go to work, and then there will be no more fuss. We will not do anything to thee; thee can walk from anywhere all hours, and have quiet, but thee must leave that job or thy doom is bad. This is true, mind, and believe no such bugger as you shant live long unless thee go from here-give up work like a true man. Mind thy eye mind now.

Mollie Maguireism is most rampant during a coal strike, the scoundrels taking advantage of the unsettled and excited times to carry on their depredations. People are then shot down or stabbed to death upon the streets, property stolen and houses of unoffending miners and others burned down. Several fearful cases of villainy wrought by the Mollies are known to the writer.

In March, 1871, during the notable “long-strike,” a man living at Mount Carmel, who was lying at the point of death, was blown to atoms by having a keg of powder placed beneath his bed. It is not known what the brigands did this for, but it is supposed the man had done something before his illness that they took umbrage at. Hundreds of families were driven from their homes, and many miners, because they would work below “regulation prices” regardless of the threats of the Mollies, were butchered.

Mines have been fired and hundreds of lives lost. It is stated that the Avondale Colliery disaster near Wilkes-barre, Luzerne County, was an instance of this cruel and merciless barbarity. A man, known to be a member of the band, commenced to recite the particulars of the deed while on his death-bed, but expired before the story was completed.

A stranger, who was stopping at Ashland, recently, being tired of the deeds perpetrated in that region, was foolhardy enough to say that he would attempt the journey to Girardville, at night, without fear of the Mollies. Contrary to the advice of the people, he started unaccompanied for the place. The next morning, he was found lying in the road a short distance from Girardville, stabbed to the heart with a “Mollies’ death warrant,” which consists of a skull and cross-bones in blood and chalk upon his back.

Many well-known coal operators have been murdered while going to their homes, and their families warned to leave the region upon fear of death. Recently, when there was an appearance of a suspension the Mollies commenced to become active. At this place, they conflagrated several houses, and, the fire spreading, did considerable damage. Several “coal-breakers” were also fired.

At Mount Carmel, Ashland and elsewhere, similar outrages were perpetrated. As the excitement incidental to the expected strike quieted down, the gang returned to their haunts. Within the past week three murders have been committed, but this is considered comparatively nothing. There is apparently, no law in Schuylkill County, the principal resort of the desperadoes, and no attempt of any important nature has ever been made by the authorities to break up the band.

The only portion of the coal region where the law is seeming to exert its influence upon this brigandage is in Northumberland County, but even there it will be a long time before it will be entirely eradicated.

The impression is that some-day the aid of the United States troops will be called in to clear out the outlaws, who are apparently gaining in numbers and power throughout the coal country. Even after they were driven out in this manner, troops would have to be permanently stationed in the region to prevent their return.

The letter makes a strong case that this alleged band of Molly Maguire extremists held sway in the Coal Region by using violence. However, when you start to take a look at the author’s points, the theory falls apart.

By looking at the contemporary sources from around the Coal Region, the violence sweeping over Schuylkill County was not an organized effort by a shadowy organization. Instead, it was the inevitable result of too much alcohol, too many guns, and a complete lack of law enforcement on the part of Schuylkill County. Large swaths of northern Schuylkill County were essentially lawless. Much of the violence cited as part of the Molly Maguire problem came instead from local disputes, feuds, domestic violence, and from rampant drinking binges by mineworkers on pay-day.

It also became popular to blame any fires that occurred at mining operations on the act of incendiaries. Indeed, in this letter, the author blames the 1869 Avondale disaster that killed 110 on the work of a Molly Maguire arsonist. The investigation into the disaster pointed to flaws in the design of the shaft, but still, the conspiracy theory remained.

But what about the notes like the one cited in this letter. These notes were absolutely part of life in the Coal Region in this era. But what of their authors? Where they really part of a secret cabal to threaten the mining elite? Or where they an effort to utilize the fear being conjured by newspapers and business leaders in an effort to gain leverage in local disputes over labor? Unfortunately, we have very little in the way of evidence from the authors of these threatening “notices.”

The biggest tell in this letter that the author is subscribing to the belief systems created by Gowen and other corporate executives comes when they write about the violence that takes place during strikes. This was one of the strongest points made by Gowen – that Molly Maguires and the miners’ union were two sides of the same coin. Gowen repeatedly espoused this belief and used newspapers in major East Coast cities to push this belief to the reading public.

Evidence here for the Molly Maguire theory is at its scantest. Historians have noted that instead of exacerbating the violence against mining companies and their officials, the Workingman’s Benevolent Association actively tried to tamp down violence in an effort to keep the union together and maintain a respectable public face. The worst of the violence against mining interests came later in the 1870s when Gowen crushed out the WBA in his efforts to create a Reading Railroad monopoly over Schuylkill County coal.

In this October 1873 letter, we can see the multiple streams that ultimately came together to shape the most important decade in the history of the Coal Region.