A century ago, Central Pennsylvania marked its first Christmas at war since the American Civil War.

“Merry Christmas!” exclaimed the editors of the Harrisburg Telegraph on Christmas Eve, 1917. “Perhaps, if you have a loved ones absent or if you feel, as most of us do, the unseen but ever-present burden of the war, the words may have a hollow sound.”

They concluded a somber editorial with this thought for the Christmas season which found America entering a brutal war the likes of which humanity had never before seen:

Let us make a truce with trouble and an armistice with worry, and keep our Christmas as merrily as we may. Let us “keep the home fires burning ‘till the boys come home.” Let the yule log blaze on every hearth, its bright rays chasing away the gloomy shadows and its warmth reflected in our hearts and lives.

The following accounts detail how Central Pennsylvania marked the holiday season a 100 years ago.

From the Harrisburg Telegraph, December 24, 1917

Harrisburg, relaxing from the long steady strain of doing its bit for Uncle Sam, was prepared today to stretch its legs under the dining table on Christmas of 1917 and eat turkey. There was no camouflage about it. Momentous crisis through it be, and high as the gobbler soars in price, it promised to be a Merry Christmas with observance of the old, sweet traditions.

The arrival of hundreds of boys in the uniform of Army or Navy from various camps over the country lent a bright dash of color and action to the city, and served to remind all that the big sacrifice has not yet been made. But the Sammies and Jack Tars were so tickled to get back home and whiff once more the aroma of real home cooking that what may happen I the future was overlooked in the gayety of Yuletide.

Many a mother and father felt that Fate was unkind in not shipping their son home, too, for Christmas dinner, but they had the solace of knowing that the camps have been pretty well supplied with cheer. To Camp Hancock for instance, where 32,000 men from Pennsylvania are bivouacked eighteen tons of turkey were delivered on Saturday.

The dressed birds will be turned over to mess sergeants today and the roasting of them in the field bakery will begin this evening. Most of the soldiers will have four and a half straight days respite from all drill and work, though some will be unfortunate enough to draw guard duty for part of the time.

As for Harrisburg, not in many years has the public been so free with its Christmas coin, this being due partly to the three-quarters of a million dollars which was paid out by savings institutions. For two weeks the shopping district has been crowded to overflowing, and one thing sure is that the youngster will be just as well treated this year as last. American toys, which replaced those made in hated Germany, have sold prodigiously, among the popular innovations being dolls made of wood, and the many toy industrial mechanics.

Shortage of hauling facilities could not interfere with this year’s Christmas traffic, “Cash and Carry” was the slogan the last few days and it was funny enough today to see the tardy buyers trying to enter a street car with two turkeys and Christmas tree.

While the children of Harrisburg are being so plentifully cared for it is fine to know what the American soldiers over in stricken France has purchased thousands of dollars’ worth of toys and clothing for the children of refugees. One unit of infantrymen bought 300 overcoats for French destitute children. All the American air squadrons will set up Christmas trees for the children of the nearby town. They will be illuminated with candies and gifts will be presented to each little orphan. All over the fighting zone with will be a Christmas long to be remembered if American generosity can make it so.

Saturday night and all day Sunday the Pennsylvania station was the mecca for many anxious parents, brothers, and sisters of Dauphin County men in service. Of the total of 2,200 probably 150 secured leave of absence. Many are from so considerable a distance that they will be able to stay home only long enough to help devour the Christmas turkey. There was something inspiring and comforting in the presence of these stalwart soldiers, whose general improvement, morally and physically, was noted by thousands of persons who kept an appreciative eye on the men in uniform wherever they appeared… 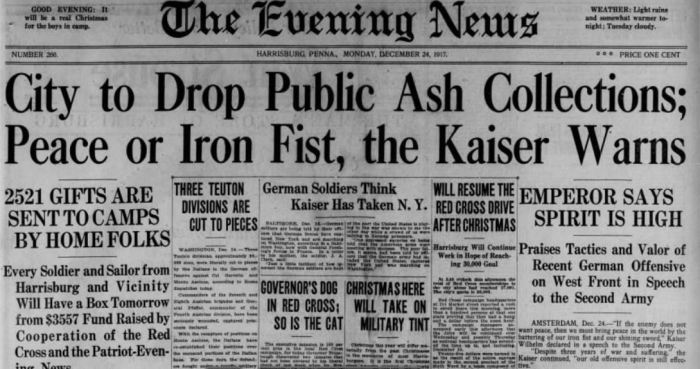 Christmas this year will differ materially from the past Christmases in the memories of most Harrisburgers. It is the first Christmas since American entered the world war, and the presence here of many soldiers from the cantonments gives it a military aspect. Tomorrow will be a day for the welcoming home of the boys in khaki as well as opening the eyes of the youngsters with the splendors of the tinseled tree.

For the first time since this country got into the war, industry wherever possible will suspend. Every man and woman not absolutely needed to keep the machinery of war going will have a day at home. Also for the first time in some years there is no speculation ahead of time whether there will be one of the old-time white Christmases. There will be sleighing, some skating, and probable clear skies.

Notwithstanding the high prices of everything the stores report big sales during the pre-holiday season. Increased pay in many branches of work is the answer. The war-time pay envelopes appealed to many persons who dealed in Christmas essentials, and some farmers and their wives at late markets Saturday tried a gouging plan that failed dismally. Turkeys that sold a few years ago for $4 were marked $9.50; an ordinary -sized goose in one market was tagged at $4.50 and chickens were offered at $1.75 to $3. The hold-up failed at the Farmers’ Market, Fourteenth and Markets, streets, Saturday night, and scores of birds were carried home.

The busiest people today were the mail carriers and the expressmen. The Post Office force and the express companies worked all day yesterday and will work part of tomorrow to bring down the piles of bundles that have been coming in on every train. The parcel post deliveries were the greatest this year in the history of the service.

While there was no dearth of Christmas trees, other Christmas greens, picked out and sorted over last week, looked rather bedraggled today. There was some holly left, but it had few berries. At the eleventh hour a goodly supply of mistletoe reached the city so the horrible possibility of a “Kissless Christmas” has been averted.

Harrisburg men, home on leave are arriving from the cantonments almost hourly. The Navy is also sending its share and sturdy young tars may be seen at any time on Market Street.

The first contingent of men from Camp Meade arrived on Saturday evening and every train from the South since then has carried its share.

Some men are coming from camps as far West as Oregon and will be correspondingly late in arriving. A good percentage of men have been released from each camp but this percentage will not be larger than 50 percent at the most so that a large number of the men will only be able to envy their more fortunate comrades.

So far the increased traffic has not greatly hindered the railroads as special plans were laid in advance to care for it.

It is possible that special trains will be run from railroad centers such as Harrisburg direct to the camps, as most of the men’s leaves expire at the same time and they will return together.

At many of the hearthside gatherings tomorrow the uniform of Uncle Sam will be a dominant feature. The uniforms will be seen on the streets and at the church services.

The Christmas exercise of the Sunday Schools for the children were started yesterday and will continue today with a few for tomorrow. In some of the churches early services will be held in the morning and today special committees on church decoration were at work twining greens about the pulpits and altars.

The Governor and Mrs. Brumbaugh tomorrow morning will distribute candy to the city’s youngsters at the Executive Mansion at 9 o’clock and will enjoy their turkey at the mansion.

The Rotary Club, the Salvation Army, and other organizations are planning for big dinners for the poor. There will be special dinners at the hospitals, charitable homes and even the inmates of the jail will get sauerkraut and pork. Mrs. A. Carson Stamm will provide the annual treat for the inmates of the county almshouse. Open house will be observed at the PRR YMCA. Clubs will have trees decorated and special features for the day.

The Pennsylvania Railroad reports no tie-ups or congested conditions on the roads. All the trains are running on schedule, in spite of the Christmas rush, the heavy snow and the shortage in labor. The Christmas rush which was very heavy last week, was slowing up today.