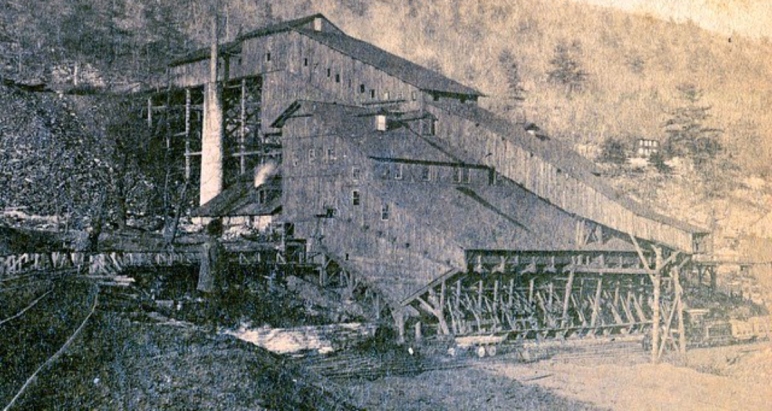 As the nation began to recover from the bloodiest conflict in its history, businessmen and investors in New York, Boston, and Philadelphia were reading a small booklet, a report from the Summit Branch Railroad Company. Compiled during the summer of 1865, this collection of data told of the trials and exploits of a new mining operation near the southern end of Pennsylvania’s Coal Region.

These workings gave rise to a community in Upper Dauphin County known today as Williamstown.

By 1865, the SBRR detailed what their new colliery looked like:

A Tunnel.
A Breaker.
A building, accommodating the saw-mill, blacksmith’s shop, and carpenter’s shop.
30 miners’ houses.
Superintendent’s house and office.
A large and commodious stable.

So we see from this briefing on the make-up of the railroad’s holdings, by 1865 there was already a small community gathering at Williamstown and working on the construction of this new anthracite operation.

In reading the full description of the SBRR’s plan for the town, keep in mind that this report is going to shareholders in the company and to potential investors. The company is putting its best foot forward here with a number of its proposals:

Upon the lands in Williams Valley, owned by the company, the plan of this town has been laid out. It is located in the Valley, immediately below the Williamstown Colliery. The lots are 150 feet deep by 50 feet front. These lots are offered at $150 for choice corner lots, and $100 for all others.

There is already quite a demand for these lots, but discrimination is to be made in making sales as to the desirability of proposed purchasers, it being far more desirable to the Company that a reliable, steady class of men should settle there than that large immediate profits should result from sales.

The better portion of miners prefer to remain permanently in the employ of one company, and to this end are desirous of purchasing a small lot of land and erecting a house thereon. In most cases, easy terms of payment are required by the purchaser, to enable him gradually to pay the amount of cost from his savings. It is the policy of the Company to secure as many as possible of this class of miners, and to make such terms of payment as will warrant the belief that they will be met.

Our deeds forbid all sales of intoxicating liquors under penalty of forfeiture. It is hoped that this clause will have a tendency to attract a superior class of miners.

In all cases when companies have owned their lands, the sale of town lots, reserving all mining rights, has been a source of large revenue, and it will undoubtedly prove so in the case of this Company.

The company seeks to express that this will be a different sort of town from other’s in Pennsylvania’s anthracite region. The forbidding of “intoxicating liquors” is a direct response to the drunkenness and lawlessness often spotted in parts of neighboring Schuylkill County. The investors in SBRR were often located in Boston, a notorious hotbed of the emerging temperance movement.

In looking into the economics of this briefing, one line in particular stands out.

“The better portion of miners prefer to remain permanently in the employ of one company, and to this end are desirous of purchasing a small lot of land and erecting a house thereon. In most cases, easy terms of payment are required by the purchaser, to enable him gradually to pay the amount of cost from his savings.”

In this pleasant and free labor-inspired description, the company is offering generous terms for miner’s to come and work for their colliery. They could even own their own home!

However, it is the “easy term of payment” that leads to trouble, as it did throughout the mining trade in the mid-nineteenth century. The SBRR, along with most colliery operators at this time, would alter the prices of equipment, supplies, and food that would be sold to these men and their families through company stores. Oftentimes, workers would be paid with company scrip, only good in the company’s store and allied businesses.

The goal? Keep the men indebted to the company. With the workers in perpetual debt to the company, the organization could ensure it had a steady workforce and that it could contain costs going toward labor in a labor-intensive work environment.

The policy and its marketing, however, seemed to have worked. By 1870-71, Williamstown had rapidly grown to more than 2,500 residents, 600 of whom worked directly in the colliery of the Summit Branch Railroad Company.