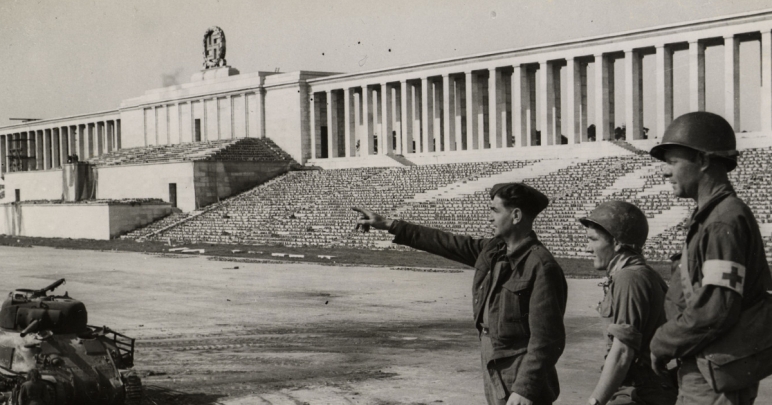 From the July 13, 1945 edition of the West Schuylkill Press-Herald:

In a letter to his friend H.F. Reber, of the Press-Herald office at Pine Grove, T/Sgt. Irvin R. Schwartz, somewhere in Germany, expressed his delight and many thanks for the splendid mention in the hometown paper on the presentation to him of the Distinguished Service Cross.

Shortly after attaining the rank of Technical Sergeant, Schwartz had the honor of having offered to him a First Sergeantship, the very highest rating of non-commissioned officers, but he turned the proffer down; right now as a Technical Sergeant he has a total of 33 men under his supervision and, since there is a possibility of fighting in the Pacific area later, he felt as though he had enough to do to take care of the number of men he does have at the present time.

A First Sergeant has charge of an entire company of men and that means taking care of as high as 200 men and even more. Against the German soldier, he says, “I know I could take care of the post, but with this war not over, with the Japs it is altogether different. I felt I would be better satisfied with 33, but had I known that we definitely would not see any more action I would have taken the First Sergeant post. All my men, the other men in the Anti-Tank Company and the company officers, including the Company Commander, begged me to take this high honor. But I have now told you why I didn’t.”

“Furthermore,” Schwartz says, “I had a chance to be an officer. For similar reasons I turned down Second Lieutenant bars. I have 82 points and the discharge minimum is 85 points. So there is a possibility of going to the Pacific area yet. At least I would get acquainted with the Nips. Here is my point set-up: D.S.C., 5 points; Bronze Star, 5 points. Purple Heart, 5 points; 5 campaigns, 25 points; service, 42 points; total, 82 points (1 point per month in U.S., 2 points per month overseas; total 82 points).”

“The other Sunday afternoon I took my jeep and drove to the famous Autobahn (superhighway) and visited the battered city of Nurnberg, Germany. I discovered that the Sto-durin, the scene of the Nazi party’s annual rally, was almost untouched and it was really a place to see. The ground was ripped up by our tanks when they took the city and at places the grass had grown four feet high.”

“I also visited the big Ninth Air Force base where some of our heroic pilots showed us their P-47 Thunderbolt fighter planes. I sat in one and they really are a machine. Tomorrow I am going back and one of the airmen is taking me for a flight on a plane which, throughout the war, was constantly over Germany crumbling its war effort.”

Featured Image: US Army soldiers at the Nazi parade grounds in Nuremburg with a liberated British POW. (USHMM)