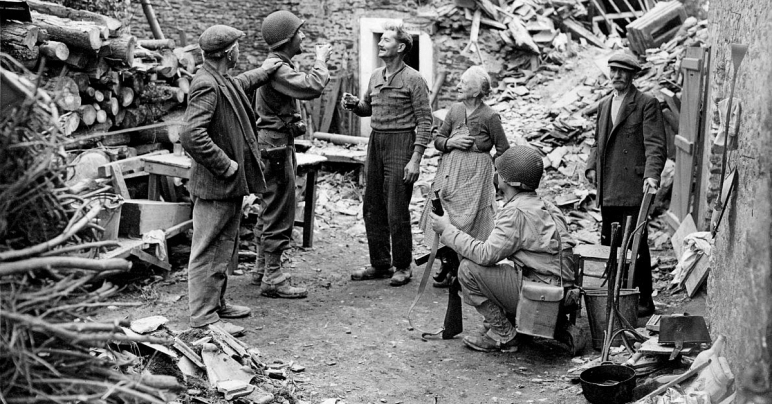 With the First Division in France

We are encountering more exciting experiences as each day glides over the battlefields of Normandy.

Recently on an advance we rolled through the main street of a fairly large town “somewhere in France.” Upon entering the town we discovered not only windows, roofs, and sidewalks jammed with French people, but also the streets themselves and it took some time to our trucks and huge anti-tank guns through the small opening cleared by some alert Frenchman among the hundreds of people welcoming us with the V sign, handshaking, cider, wine, flowers, etc.

I noticed two things in particular. There were French men and women on the streets entertaining with some typical French music and various kinds of instruments. And there was one old Frenchman who must have, in my opinion, continued playing on his old accordion for a period of at least two hours. And then he smoked a Phillip Morris and started his merrymaking all over again.

And then there was one of the numerous men with a pitcher in one hand, usually the left, and a glass in the other. Suddenly one could hear the sound of Uncle Sam’s fighters and a formation of bombers in the distance. Soon the planes, Marauders, Bostons, Thunderbolts, and Mustangs were moving overhead, destined for some Hitler target here in France.

Well, here’s this one Frenchman. Everyone, civilians and soldiers, are looking up at the numerous black and white striped aircraft. This Frenchman yells “Amerikans, Amerikans, Amerikans” at the same time holding the pitcher and drinking glass high over his head as if to give our airmen a drink.

As people cheered the planes became smaller and smaller and suddenly this man throws the pitcher and all as high as possibly could toward the planes. Whether this pitcher and glass hit the ground in pieces, or whether it safely reached our medium bombers and fighter planes I do not know. I saw no more of the old man’s glassware after it left for the far-away planes.

So you see, Mr. Reber, how, even in the midst of battle, there is a time for laughter, such as the above instances prove to you. But these are rare!

As each day glides over the battlefields here in France, I also discover more and more how you people back home can depend on us. I say “us” for the simple reason that I’m right in there throwing all I have at Jerry, at times many minutes before he even begins to think about getting me. But truthfully you can depend on us for final victory, but we need the full support of the folks at home. With your assistance, the job will be completed. And it will end very suddenly – at the time you will least be expecting it. But you know, as well as I do, that the end hasn’t come as yet and we shall NOT cease firing at this stage of the contest.

Thank you for your most interesting and most-welcoming letter, which reached my sleepy eyes a few nights back. In the midst of the preceding paragraph, I received another Press-Herald and again I’m forced to express my thoughts of appreciation.

With the convenience of a nice, warm, sunny French day, I shall attempt to enjoy another “Letter from Home.”

Best regards to my friends back home – from

Featured Image: An American Army officer and a French civilian share a toast amidst the rubble of the town of Saint-Lô in the summer of 1944.

One thought on “Letters from War – Scenes at a joyous party in liberated Normandy, August 1944”