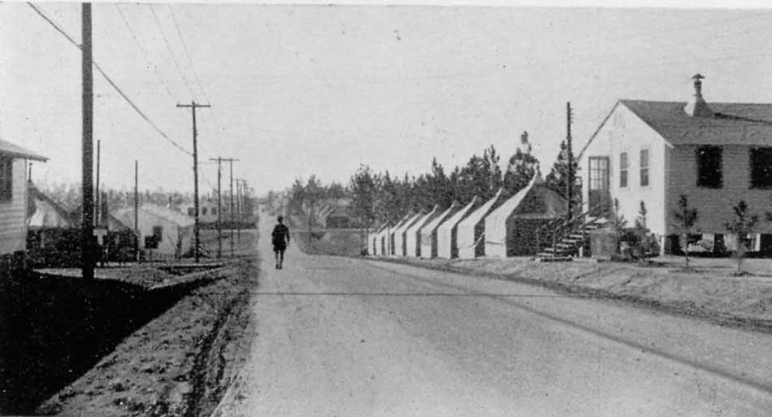 Irvin Schwartz and five hundred other young American boys shook and rattled their way across America from New Cumberland, Pennsylvania to Camp Shelby, Mississippi in May 1943. The 18-year-old former reporter for the West Schuylkill Press-Herald documented the journey and his first days in a sprawling US Army training camp.

This was the first letter that Schwartz wrote home to Pine Grove, Pennsylvania for publication in the local newspaper, a habit the young soldier would keep up throughout the Second World War. He wrote this letter to Horace Reber, the Pine Grove representative of the Press-Herald.

The correspondence appeared in a remarkable section of the Press-Herald that editor Mae A. Bashore published in nearly every edition of the newspaper that went out during the conflict. “Our Boys with the Colors” was a section that published letters from area residents who served in every branch of the military and were stationed across the globe. These letters poured in and were often addressed simply: “Dear Mae.” They kept families on the home front aware of where their loved ones were, but because the Press-Herald was often being sent along with mail to Schuylkill County residents serving across the globe, these letters were also read by those in service. This provided a comforting way to know where their school friends and buddies were up to though they may have been serving on the other side of the planet.

In Irvin Schwartz’s first, undated letter, he writes of his travels by train to Camp Shelby, the friends he made on the trip, and his first taste of Mississippi summer heat and humidity. He noted the massive size of the base, the athletic facilities on-site, and his initial impressions of life in the US Army.

Our Boys With The Colors

Pvt. Irvin Schwartz, former Press-Herald correspondent, and carrier for Pleasant Valley, writes a running account of his journey from the New Cumberland Induction Centre to Camp Shelby, Mississippi, in a letter to Mr. and Mrs. Horace Reber, Pine Grove. The letter follows:

“We left New Cumberland on Tuesday night at 10 o’clock. It was simply pouring rain when about 500 of us got on the troop train, not knowing any destination.

Tommy Hughes, star baseball pitcher for the Phillies last year, accompanied us down to the station. We slept good and when we awoke Wednesday morning we were traveling two miles from the Pennsylvania-West Virginia state line. We traveled through West Virginia, to Columbus, Ohio, home of Ohio State University, passed through Dayton, Ohio, and reached Richmond, Indiana at 12:30. We pulled into Indianapolis, capitol of Indiana, at 12:45 C.W.T., and arrived at Terre Haute at 4:30.

On Wednesday night we stopped at Effingham, Illinois, for a stretch. At 8 p.m. we reached Centralia, Illinois, where we had a half hour stop. After sleeping well on Wednesday night we discovered on Thursday morning that we were in Mississippi. We reached Mantee, Miss., at 10:15 C.W.T., and arrived at Lena, Miss., at 1:45 p.m. Again we were given one-half hour’s rest at Jackson, capitol of Mississippi, arriving there at 3:05 p.m.

We pulled into Hattiesburg, Mississippi, site of Camp Shelby at 9:15 p.m. Thursday. We were transferred to our barracks by army trucks and immediately given a hot doughnut lunch. Friday morning saw us receiving our first drill instructions.

I like the meals O.K. and I also like the place. Shelby is among the largest camps in the United States.

All the Pine Grove boys were together on the train but now no two of us are together, and we seldom get to see each other.

This camp has a big athletic field where night baseball, softball, and football are played. A spacious arena is situated on the ground for the staging of basketball games. I have seen only about one-fourth of the place.

It is very hot in Mississippi but we are used to it already and the weather has little effect upon us.

I still have the Press-Herald of May 7 and expect to keep it. I read this copy anytime I discover a dull second. I read the paper prior to falling asleep on the train, and I have read it over and over again here at Shelby.

We check up on the big league baseball scores by reading a New Orleans paper, but how’s Pine Grove High School doing with its present day sports? I haven’t heard a thing.

People here are living in scattered sections, and towns and cities are few. I could easily name every town we passed while traveling over Mississippi. Highways are far from numerous, but the roads are wide and the ground is of good quality.

One of my buddies on the train down to Shelby was Herbert “Jeb” Stewart, 6 ft. 8-inch Mechanicsburg H.S. basketball, football and baseball star, weighing 225 pounds. He won the high scoring championship in basketball the past three years, and is known to most sports followers over Eastern Pennsylvania. Stewarts only a Junior this year. Another pal on the train was Robert Sowers of Auburn.

One thought on “Letters from War – On the train to Camp Shelby, Mississippi in May 1943”