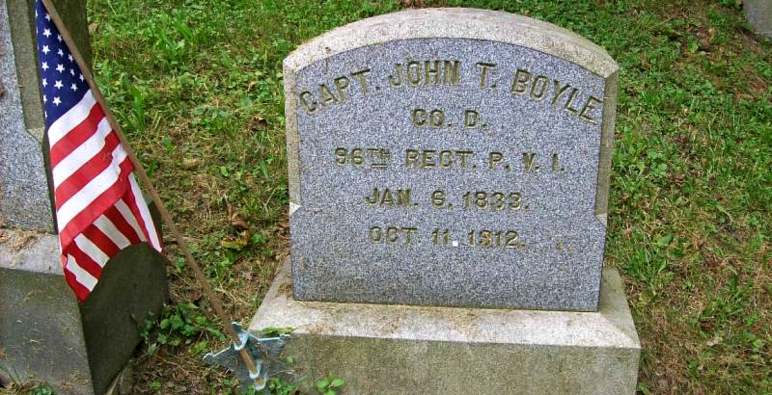 The Lykens Standard of October 18, 1912 carried the obituary of a well-respected veteran of the American Civil War. Captain John T. Boyle served in Company D, 96th Pennsylvania during the unit’s bloodiest engagements. In the years after the conflict, he entered politics and the newspaper and printing business before settling in the Dauphin County mining hub of Williamstown.

The Standard‘s editorial team described the unofficial historian of the 96th Pennsylvania Volunteers as a man of virtue and lauded his skills as a writer:

Capt. John T. Boyle, one of the best known residents of this section of Pennsylvania, died Friday last at his home in Williamstown, after a short illness. His death came as a great surprise and consequently, was a shock to his numerous friends. Capt. Boyle had a most enviable record as a soldier in the 96th Regiment, he was one of the region’s most finely educated men and was a writer of unusual ability, both as a historian and in poetry. Some of his writings are valued possessions in every library of consequence in this part of the State.

He was educated for the law and studied that profession under some of the county’s greatest barristers, but shortly after being admitted to the bar, he was sent on an important mission to Europe. When he returned, the war broke out and he enlisted and served throughout with the 96th Regiment. These experiences had the effect of weaning him away from his profession, although he was considered to be one of the best equipped young lawyers in the county.

He became a newspaper writer and a writer of history and became attached to the editorial staff of the “Miners’ Journal” under Benj. Bannan, the paper at that time being one of the leading issues of Central Pennsylvania.

When Governor Hartranft, a close personal friend and comrade, was elected chief executive of Penna., he received an appointment in the Auditor General’s department and served there for many years. After leaving Harrisburg, he went to Philadelphia, where he located for a number of years, and then returned to Pottsville and later moved to Williamstown, where he accepted a position under Capt. Richard Budd and continued in that position under Capt. Budd’s sons up until the time of his death.

He was commissioned captain of Co. D, 96th Regt., when that regiment was organized, and rendered valiant service during the war, participating in the hard campaigns of that command. He was injured in the Seven Days’ battle at Gaines’ Mill. Throughout the entire term of service of three years he kept a complete and accurate diary and this has proved the most valuable historical record of the regiment during the war. He wrote a history of that command which is generally accepted as accurate and authentic in every respect. When the battle flags of the regiment were presented to the Historical Society of Schuylkill County about three weeks ago, Capt. Boyle was to have made the presentation, but, on account of the death of his sister, Mrs. Joel McCammant, whose funeral took place on the same day, he was unable to perform the service.

It was soon after returning home from his Pottsville trip that he was stricken with the illness which terminated fatally.

Among his leading writings are “Crampton’s Pass,” describing in poetry the engagement of his regiment at that famous place, and his history of the 96th as contained in Bates’ history…

His funeral was held last Monday with internment at Pottsville. The members of the 96th attended in a body.

Featured Image: Boyle’s grave in Pottsville, by Russ from Find A Grave