Throughout the First World War, Corporal William Graeff sent letters home to his family and friends in Elizabethville, Pennsylvania. Many of them were sent with the intention of having them published in the town’s newspaper, The Echo.

In this lengthy letter written in December 1917, Graeff describes the training regimen he experienced in Georgia with the 108th Machine Gun Battalion, 28th Division. Camp Hancock was located near Augusta, Georgia and was designed to house more than 50,000 soldiers. It was in this camp that the 28th Infantry Division, made up of Pennsylvania National Guard units, trained for action in the European conflict. 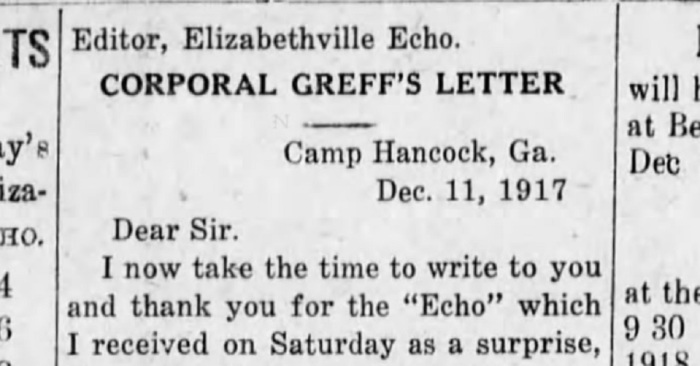 I now take the time to write you and thank you for the “Echo” which I received on Saturday as a surprise. It surely pleases me to receive a paper from my hometown! It shows that I am remembered that much anyhow. And will surely promise all concerned that I will do my very best if I am called to fight your battle, as well as my own.

Now if conversation could be exchanged for real money, I would have enough of the long green to buy a string of banks from Phila. to Frisco and yet I have neglected to direct any of my talks to your Thanksgiving or rather the holiday is over and its back to the woods for voice culture, and the cotton fields for rifle and bayonet practice, but as you have read so much of that life, I am sure that I cannot interest you in that line. So I shall surrender my mind to other thoughts. I will try to make this an interesting letter anyhow. Many people have before this held the opinion that the men who waited to be drafted were deficient in enthusiasm, as well as patriotism, and that they would make poor soldiers, others held that it would be impossible to stimulate their minds towards interest in their duties by prophecies and opinions have fallen by the wayside in respect to the new National Army. The recruit entering the army is in most cases disheartened and conditions appeal to him as being distasteful. The home environments are entirely absent, the voices of mothers and the girls, are in mind only, and the furnishings of the wooden barracks are for service rather than attraction. He is kept busy during the first day giving an account of himself as a civilian, after which an outfit is given to him.

Upon changing his clothes, he becomes one of the thousands who have donned a uniform for the same purpose. The experience is quite ordinary until the physical examination is made whereupon an inoculation and vaccination is received accompanied by more or less discomfort. The peculiar side of the operation appears in the weakness of the big men. It is very common to see the big chap fall over when they receive an infection of the serum but the little men take it without faltering. Having recovered from the effects of the serum or vaccine, the recruit obtains his first knowledge of a soldier’s duty. Discipline seems to be the most difficult quality for a man to acquire, for Americans cannot very readily accept orders without some friction against their spirit of Independence and yet it is remarkable how the men at the different camps have given themselves over to this almost steel-like discipline. Like one man the boys have adjusted themselves to conditions and very rarely does one hear one word of complaint. A student of psychology would find a rich field in the army of today. The chemist-lawyer, businessman and teacher are side by side in the ranks, all working towards the same goal. Coupled with that we have more than a score of nationalities which adds to the problems of those who are in charge of our training. Few persons can realize the great amount of individual effort and sacrifice that is being made in order that it may be possible for America to affect its army program.

Lonely hearts and troubled minds are numerous but the work must go on, and on it goes. The men have grasped the true meaning of the effort, and are adapting themselves to the army life with a rapid stride that is astounding. They look like soldiers, feel like soldiers, and act like soldiers, and under the so called strict army discipline have been molded from a queer conglomeration of manhood into a real fighting machine that has but one heart, but one soul and always in favor of some purpose. Personally I believe that the training that the men are receiving will ever exercise a wonderful influence in our future social and political life, for discipline is developing proficiency and an exactness for details which heretofore have been lacking in the average American. Beside that it is developing character and when the men are discharged at the end of the war they will return to civil life with a broader perspective and a much keener and nobler appreciation of those things that which tend to uplift society.

Physically every man who is physical or privileged to serve in the army will reap benefits that cannot be estimated. The army it is the builder of men.

Hoping this letter has not made you tired of reading it, I ask you to please place this letter in your columns of the paper so that the letter may be of some benefit to another in enlisting. Thanking you again for your kindness, hoping I will receive the Echo and can see how you have thought enough of your boys to print whatever any of them send to you. Give all of my friends my best regards, and And soon,
Good Bye,
Corp. Wm. Graeff,
Co. A 108, M.G.B.
Camp Hancock, Ga.

The letter was published in the Elizabethville Echo on December 27, 1917.