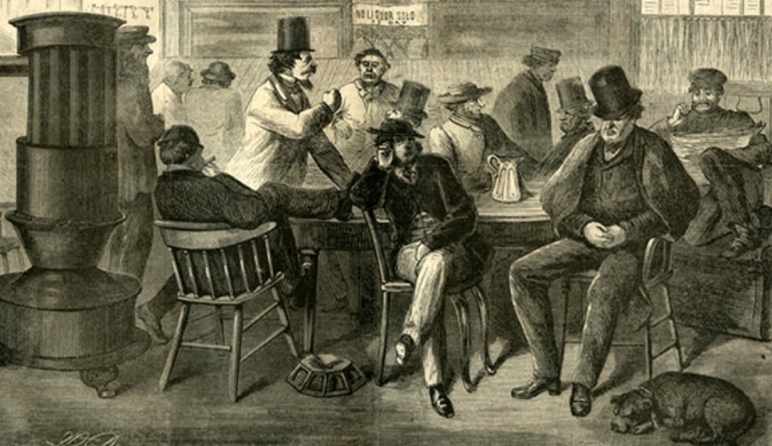 The editors of the Lykens Register seemed horrified to report this story from Williamstown in December 1874:

A serious disturbance occurred on Saturday evening at the hotel of Nicholas Baum, in Williamstown. Pistol shots were fired, knives brandished, and the bar room windows riddled with stones.

Stones were also thrown through the second story windows. The rioters also battered in the front door. At the time the disturbance broke out a number of persons were in the bar room, all of whom escaped, we believe, uninjured, but two or three of the participants were more or less hurt.

William Mullen, whom our informant states was the instigator of the lawlessness, was subsequently arrested, together with three other young men, all of whom have given bail for appearance at court.

It is believed that the attack upon Mr. Baum’s premises was premeditated and that the participants numbered not less than eight or ten young men, nearly all of them under age. It is seldom that we are called upon to chronicle such acts of lawlessness, which are of frequent occurrence in Schuylkill County, and we trust that the offenders may receive their deserts.

Dauphin County courts and juries have quite a different way of dealing with such customers from that in vogue in Schuylkill, as these rascals should be made to understand to their sorrow.

Nicholas Baum’s Washington House Hotel near the corner of Market and Water streets was apparently targeted for violence on this occasion.

Violence of this sort did indeed, as the newspaper editor points out, occur regularly in the isolated patch towns of Schuylkill County, but was relatively rare in Williams Valley. While the ethnic-inspired violence of the Molly Maguires roiled neighboring communities, the mining towns of Northern Dauphin County were placid and calm.

In these early moments of Williams Valley’s history, an overwhelming number of workers within the region were of German, English, and Welsh ancestry, with but a small smattering of Irish, Polish, and Italian.

The violence in the neighboring districts between the infamous Coal and Iron Police of the Philadelphia and Reading Coal and Iron Company and Irish communities in Schuylkill County likely contributed to an influx of people leaving for more peaceful areas. A notable rise in the Irish community between 1870 and 1880 can be seen and is likely attributable, at least in part, to the battle between the P & R and ethnic blocs in the isolated mining communities east of Williams Valley.