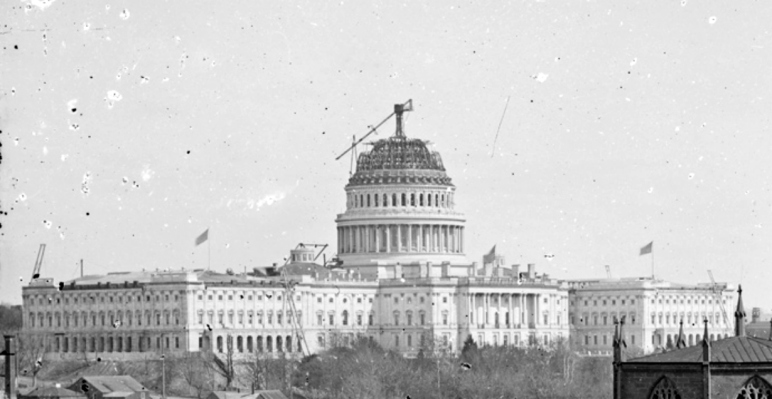 They were happy to leave Baltimore behind them.

Yes, the young ladies waving flags at them from the second floor balconies as they marched down Pratt and Eutaw streets were beautiful and sentiments seemingly legitimate; but something must have felt off about that moment.

They were marching here in April 18, 1861 when a number of these same men were pelted with bricks and other objects. The 25th Pennsylvania Volunteers raced through the city bloodied, but alive. Those who followed them were not as lucky. On April 19, members of the 6th Massachusetts Regiment exchanged shots with secessionist sympathizers in an incident known as the “Pratt Street Riot” or the “Baltimore Massacre.” A dozen civilians and four soldiers were killed in the incident.

Now, a number of the officers and men of the 96th Pennsylvania had these memories close at hand as they marched through the federally pacified city. The only hint at the city’s displeasure were the gentlemen slouching on street corners. One muttered, “There goes some more of the damned Yankees,” with a long pipe locked between his teeth.

The regiment ascended the railroad cars of the Baltimore and Ohio’s Washington line and sped off through the night of November 10, 1861.

Pulling into the Union capital at 2 o’clock in the morning of November 11, they dismounted and headed for the temporary quarters constructed near the depot. A letter writer described the scene of this early morning entrance into the city:

“Vacating the cars, we formed into line, and through several hundred yards of unyielding mud, reached the barracks – a long depot like building, built expressly by Government for the accommodation of freshly arrived troops.”

They bedded down, but were awakened early for breakfast at the “Soldier’s Retreat,” where 350 men were fed a “breakfast of coffee, bread, and hot beef,” and without orders yet to march, some of the men visited the as yet unfinished Capitol.

When the orders came, the men departed with canteens full of coffee and haversacks filled with sandwiches. Their march did not carry them very far from where they had begun.

“We are encamped in sight of the Capitol, at the Bladensburg Toll Gate, about 1 ½ miles from the Capitol,” wrote Adjutant M. Edgar Richards in a letter to his father. He also noted that they were camped next to two New York units, the 52nd and 54th.

“The camp is called Wilder,” wrote Corporal Henry Keiser in Company G. Following the regiment’s first night in this encampment just outside the city’s limits, the 21-year-old Keiser explored the camp. “It is a very pretty place,” he noted in his diary after taking in the sights. This area, known by Washingtonians as “Kendall’s Green” was located off of the road to the neighboring village of Bladensburg.

The regiment settled into Camp Wilder, taking up rudimentary drill and the regimens of under the command of Lt. Colonel Jacob G. Frick.  The 36-year-old officer was not happy with his circumstances.

“As usual I am in command and have nearly all the work to do,” wrote Frick on November 15. “Our Colonel has not spent a day or night with the Regt. since it has been formed.” Colonel Henry Cake had ruffled a number of his junior officer’s feathers by making his rounds among prominent Pennsylvania lawmakers instead of seeing to his duties at Camp Wilder. Frick described the November weather and his unit’s campground as “muddy and disagreeable,” the last of which describes Frick’s mood as well.

On November 13, the regiment marched through the muddy streets of Washington to the city’s Arsenal on the banks of the Potomac River. There, they drew their first government-issued weapons. “[They were] old smoothbore musket, percussion locks, altered from its flint musket – loaded with a ball and three buckshot,” wrote Adjutant Richards.

Their first arms were universally disliked. “[G]ot the Springfield musket for our men, with the promise that we were to use them only for drilling, and then exchange them for the latest improved arms,” wrote Captain Charles Hipple of Company H.  “I slight doubt the sincerity of the promise, and do not like our arms.” The assumed insincerity that their muskets were to be used only for drill was noted by the enlisted men as well. “[They were] only to drill with, at least so the officers told us,” wrote Corporal Keiser.

The rest of the unit’s time in Camp Wilder was spent much in the same way they spent time in Camp Schuylkill back in Pottsville. With lots of free time waiting for orders, the men wrote numerous letters home describing their thoughts on the war.

“We are determined to conquer in the name of God and our country, or die in defence of that religion, that flag, and that Constitution handed down to us by a noble parentage,” wrote Captain Hipple to a friend in Pottsville. All around them, the machinery of war assembled, making Washington into a massive armed camp.

In their empty days, officers and enlisted men explored the Union capital. A New Yorker encamped at Camp Wilder that November described the city as he saw it:

The dome of the Capitol building was yet unfinished, and the mammoth sections of the Goddess of Liberty were lying around, head in one place, shoulders in another, and feet in still another, as though entirely unrelated. Pennsylvania Avenue, unpaved and dusty as a country road, was lined with stores and dwellings, many of which could be called shanties. Washington was essentially a southern city, without enterprise and improvements, a byword and a reproach among nations.

Captain James Russell, among those who had served in the 25th Pennsylvania earlier that year, thought he had witnessed a change in the city since he had last been there in July.

“There is very little drunkenness to be seen in the streets, as compared with last summer while we were stationed at the Arsenal. Passes are not so easily obtained, and then they are examined by the Provost guard, which makes the boys very careful about venturing out of camp without the necessary document,” he wrote to the editors of the Miners’ Journal.

One of those soldiers attempting a visit out into the city was Private Clement Potts. He had ventured out without a pass disguised in civilian clothes smuggled into camp by members of Company C.

“I went into the capital and seen [sic] the Senate chamber and House of Representatives,” he wrote to his mother. “The floors are covered with the finest of Brussells [sic] carpet and the seats and chairs are covered with red silk velvet. The floors and stairways are of white and colored marbles. They are splendid.”

Potts also meandered to the Smithsonian Institution, where he was given a personal tour from Smithsonian curator Spencer Fullerton Baird, with who apparently Potts had some personal connection. “He was very glad to see me and took me all over the institution and told me if their was anything that I ever needed that he would be very glad to give to me,” Potts remarked.

Potts almost paid the price for his little escape, however. He was stopped three times by increasingly suspicious provost guards, the military police that patrolled the city. “Tomorrow I intend getting a pass from the Col. and then I need not be afraid of the patrols in the city,” he wisely noted.

In their first encampment outside Pennsylvania, the 96th Regiment readied itself for action. It continued drill, it know had its arms, and newly issued uniforms ensured they looked the part of United States volunteers. They arrived at Camp Wilder on the afternoon of November 11 and departed  Washington by crossing the Potomac River to Alexandria, Virginia on November 25. They were truly headed for “secesh.”

One of the few perks of being a voter in Washington DC: I get an awesome “I Voted” sticker with Frederick Douglass on it. 🇺🇸✔️
Getting my battlefield fix 💣
Back to hiking ❤️
#PandemicHair #CountOlaf #Mugatu
%d bloggers like this: