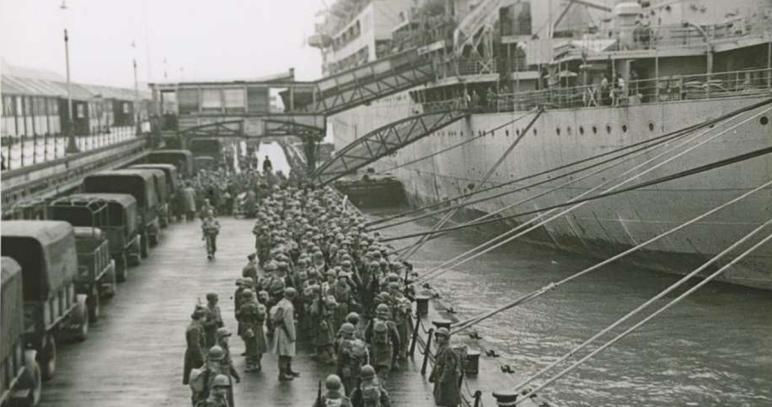 In his first letter from war-ravaged Great Britain, Pfc. Irvin Schwartz wrote home to the Pine Grove representative of the West Schuylkill Press-Herald in November 1943 in an effort to describe his journey across the Atlantic Ocean to the newspaper’s readership.

Schwartz, a native of Schuylkill County, wrote to his former supervisor Horace Reber on November 13, 1943 to provide a local perspective on the Second World War from a newly-minted soldier of the US Army. The letter was published in the December 10, 1943 edition of the Press-Herald.

The letter provides a few different insights into life for a Coal Region soldier at war. Schwartz kept a detailed record of his journey across the Atlantic on a troopship by writing it on the back of a Hershey bar wrapper with a pencil provided by the American Red Cross. He endeavored to write a description that would get passed the military censors. He carefully wrote the letter, but the censors still gobbled up many of the details in a bid to protect American and British military secrets.

Schwartz then explores the appearance and geography of war-time England. The letter, as with all written by this 19-year-old former sports reporter for the Press-Herald combine interesting descriptions with uplifting positivity, humor, and wit. Schwartz also gives a brief insight into his opinion on arriving in England and his participation in the Second World War. He knew his stay in England would be necessarily short. To “Mr. Reber,” he wrote: “We came over here for one purpose only, and take my word for it, we will accomplish our mission as quickly as possible. That mission is, lick the Germans on their home ground.”

After being on the great Atlantic Ocean and seeing nothing but water and skies for many days, we finally came to land again, and today I’m in England – the chief country of the British Isles. Even though this country is a small one, I may not tell my exact location.

With the help of the wrapper of a Hershey (Pennsylvania!) chocolate bar, and a two or three inch pencil, I kept a complete account of our trip from the United States to Great Britain, but censorship forbids me to tell anything in regards to leaving the Port of Embarkation back in the States, name of ship, etc. route of travel, size and weight, time and place of arrival, number and various kinds of troops aboard, the boat’s facilities, time of voyage, and a lot of similar information So you see I can tell you very little. I could write no less than five books in my experiences, all of which you would find more than interesting and educational.

I can tell you very little about the trip. I may say that just before getting on the boat the American Red Cross served us hot coffee, doughnuts, and chocolate bars. It was pouring down as a band played “Over There,” “Let’s Remember Pearl Harbor,” “God Bless America,” and “The Pennsylvania Polka.”

We were given our room and mess tickets and as our names were called we answered with a “here,” “hip,” “help,” or anything similar to it, and on the boat we went as the band played “The Stars and Stripes Forever” march. Many persons looked on.

We slept for several hours before (censored). We seen many sea gulls (censored) and from there on, the story was sky and water for days and nights. Now I can understand why Columbus wanted to turn back on his famous voyage, but why did his men constantly say “Sail on, sail on, sail on, and on?” All I can say in regards to our trip is, “Water, water, everywhere, but not a drop to drink.”

On the boat the Red Cross presented us each a carton of cigarettes and a bag containing many personal items such as soap, soap box, sewing kit, playing cards, stationery, pencil, shaving cream, dental cream, razor blades, and shoe laces. We received the latest news reports each evening and were glad to know that the mines are again in operation. This report brought a big cheer from everyone.

After spending nearly six months in Mississippi, I read the book, “Life on the Mississippi,” written by Samuel L. Clemens, better known as Mark Twain. This book tells of the life of the country’s largest river and also touches the Battle of Vicksburg. (Censored)

Sunset and the moonlight on the Atlantic was a picture no artist can describe with all the colors in the world. You had to see it yourself in order to appreciate it. There were (censored) men to a room and in my particular one the states of Dear Old Penn, New York, West Virginia, and Nebraska were represented.

The food was excellent considering the circumstances. We enjoyed (censored). The first night I had to wait in line for two hours and I left the mess hall at 9:25. We did have inspection each morning by the various officers, so we had to have our room clean at all times.

In Great Britain we were greeted (censored). American Red Cross gave us doughnuts, hot coffee, and the “Stars and Stripes,” the Untied States – Great Britain newspaper which you probably have heard about. I devoted much time in reading the results of the football games played on Saturday when we were on the deep water.

We rode over parts of Great Britain by train and so I have already a good picture of this country. As you know, we are five hours ahead of Eastern War Time. On our train journey (censored)… coffee at a railroad station.

I can tell you plenty about England even though I got here only a short time ago. Again I may not write any vital information. The land is (censored). The terrain is very picturesque all around and anybody appreciates the scenery. All the buildings are low and are of grayish stone, typical English. Locomotives and coaches are smaller than back home, and the tracks are narrower. Cars and trucks are miniatures, having the steering wheels on the right side, and drive on the left side of the narrow roads.

Here there are no dollars and cents. The money system is based on pounds (a note worth $4.00 in the States), shillings (a coin worth 20 cents in the States), and pence (a large coin worth two cents of United States money). This is a confusion, but I’m getting on to it now. I had all my money exchanged into British value.

I have seen many air raid shelters. England is totally blacked out every night, and believe me, the people back in North America do not realize what it is to have lights burning all night long. This sure is a luxury I discovered.

Referring back to geography, this country has the two oldest universities, Oxford and Cambridge, which are located in the respective cities with the same name. London is the capital and the largest city in the world. What New York means to an American, London means to a Briton. Up in Scotland is the city of Edinburgh which is steeped in Scottish history, literature, and art. The world’s greatest poets were born in this country. (Censored) and Stratford-on-Avon is the birthplace of the greatest of English poets, William Shakespeare.

Plymouth is the place from which the Pilgrim Fathers sailed in the “Mayflower.” (Censored) are two great seaports. Inverness and Perth are real historic, the latter now being an ink-manufacturing center. Newcastle-Upon-Thyne is noted for its coal mining. York and Chester are two old, historic, and picturesque cities, the latter named still being enclosed by its ancient walls, eight feet thick.

Norwich is also prominent in English history. You have all read of these places in Great Britain – Westminster Abbey, Houses of Parliament, Edinburgh Castle, Place of Holyroadhouse, and York Minster. The Thames, pronounced “Teds,” is the country’s largest river, and rates next to the Mississippi.

All I can say in regards to my present location is, I like it a great deal, but all is rationed. We receive one ration coupon weekly which gives us a limited supply of candy, razor blades, cigarettes, soap, etc. However, the ration we get is enough.

Mr. Reber, we came over here for one purpose only, and take my word for it, we will accomplish our mission as quickly as possible. That mission is, lick the Germans on their home ground.

Mr. Reber, to close this letter, I will ask you to do me three big favors. First, send the “Letter From Home” to my new address; secondly, give my best regards to all my friends, and thirdly, send me two or three people to carry my Infantry equipment!

2 thoughts on “Letters from War: From Somewhere in England, November 1943”