In early October 1918, a sudden emergency descended on the Pennsylvania mining community of Williamstown. Hundreds of citizens became desperately ill with coughing and wheezing with fevers soaring. Local doctors were overwhelmed. Patients, seemingly in the prime of their lives, became sick and died at a frightening pace. The pestilence was unlike anything seen before or since.

In the October 9, 1918 edition of the Harrisburg Telegraph, a reporter tried to describe the scene in this community at the northern tip of Dauphin County.

The Spanish influenza epidemic has hit Williamstown hard, more than 100 cases being under treatment there at the present time. The three physicians at the town have more than they can take care of and a hospital was established this morning. Several nurses from Harrisburg were sent by the State Health Department to the town today to take charge of the hospital.

No new cases were reported since yesterday, however, and the physicians hope to have the epidemic under control within the near future. One death has been reported.

One hundred and fifty cases besides have been reported between Williamstown and Lykens. Gratz also is suffering heavily from the effects of the epidemic.

“Influenza appears to be increasing to-day in Schuylkill, Northumberland and Luzerne counties and we have had some reports of scattering cases in Beaver. I should say there are well over 200,000 cases in Pennsylvania now,” said Dr. B.F. Royer, commissioner of health, today.

“My advice to the people of the state now is to keep calm and help the local committees which are organizing for relief,” continued the commissioner. “There will be a demand for emergency hospitals where housing conditions are bad. People who have good tents, camp stoves, cots and equipment should lend them to local committees. These can be of much assistance. In Mahanoy City a man turned over to our people a hotel completely furnished which was idle and we have had offers of buildings and halls in various places. General Beary has placed all of the state’s armories at disposal of the department for hospitals and we have several of them in use. We are also aiding in establishing a hospital at Bryn Mawr and at points in Luzerne and other anthracite counties.” 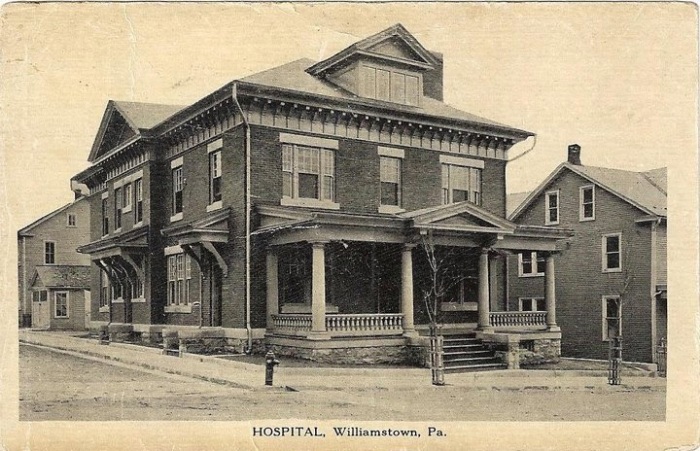 Williamstown Hospital housed the earliest patients of the influenza outbreak. It was quickly overwhelmed, and an outdoor field hospital began operation by the middle of October, 1918.

Unfortunately for the people of Williams Valley and the rest of the Keystone State, the flu outbreak would get much, much worse before there were any signs of improvement.

*Update: Stay with Wynning History for more on the Spanish Flu outbreak of 1918 as we commemorate its 100th anniversary.

2 thoughts on “The Spanish Flu Outbreak in Williamstown – 1918”

❄️❄️❄️
We are very excited about the National Museum of Civil War Medicine’s new logo. This has been months in the making, and I am thrilled with the final results! #Repost @civilwarmed with @make_repost ・・・ We are delighted to reveal the new logo of the National Museum of Civil War Medicine! #AmericanCivilWar #CivilWar #HistMed #HistNursing #USHistory #AmericanHistory #FrederickMD #DowntownFrederick #MDinFocus
Mid-1990s Jake loved all things racing. One of my favorite photographs from childhood. Rocking the Terry Labonte t-shirt and watching qualifying at Pocono Raceway. 🏁
They’re married! Had an amazing Christmas Eve with the new Mr. and Mrs. Wynn. Congratulations Luke and Veronica! ❤️
%d bloggers like this: