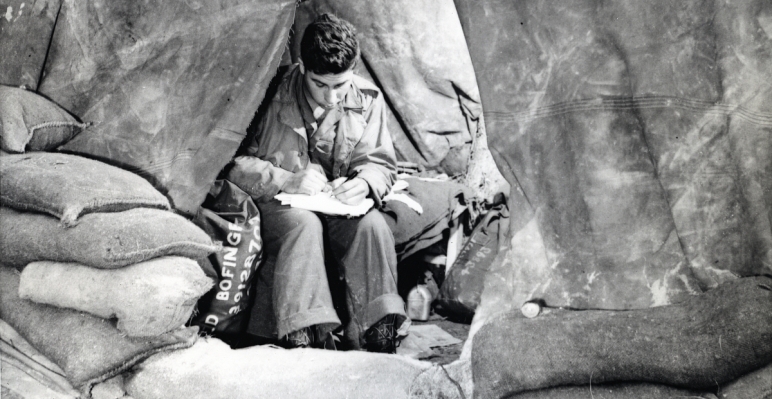 In the days following the Allied invasion of Normandy on June 6, 1944, Pfc. Irvin Schwartz accompanied the 26th Regiment, 1st Infantry Division as they fought their way deeper into Nazi-occupied France.

Schwartz, a 19-year-old anti-tank gunner from Pine Grove, Pennsylvania, was experiencing his first taste of the combat he would experience nearly relentlessly for the next nine months.

In his first letter home to his former employer, the West Schuylkill Press-Herald newspaper in Tremont, Schuylkill County, Schwartz touches on the fighting he had seen. But his letter mostly addressed the May 26th edition of the Press-Herald he had received in his foxhole near the fighting lines and events in his hometown. These bits of news included the success of Pine Grove’s high school sports teams (Schwartz had been a sports reporter before joining the Army), Memorial Day in his hometown, and the deaths of local soldiers in the war.

Shells flying over my foxhole at angles from 0 to 359 degrees didn’t keep me from thoroughly reading the May 26th edition of the Press-Herald. I received this particular copy with the first mail I received on the front lines of this new battlefield and I was amazed at its contents.

It took my mind away from war for a brief period of time as I read that Pine Grove is fast becoming the Iris Town of Pennsylvania, that Pine Grove High School captured the South Schuylkill Scholastic Baseball League championship, that Pine Grove held its annual Memorial Day observance, that the Alumni banquet was held, that our author, Conrad Richter, was honored by Susquehanna University at Selinsgrove, that Blue Ridge Park and Valley View Park opened a full season of banner attractions, that the Pittsburgh professional club chose Pine Grove as a site for its initial 1944 baseball school, that my Alma Mater graduated a total of 62, and that Dr. Walter has organized the West Schuylkill Baseball League for the summer months. But I must add that the headlines of the three Tremont youths, Furman, Ochs, and Greth, was as sorrowful as the above was pleasing.

Lt. Sarge’s letter from the Anzio Beachhead concerning a former coach at Pine Grove High School was very interesting and I should think it made all our hearts beat at a slightly faster pace upon reading it. He also made reference to one of my previous letters wherein I mentioned our present coach, Carmine Pepe.

I do not believe that Lt. Sarge is under the impression that I meant to forget to mention the name of Wilbur Derby or any other previous Cardinal and Gray mentor, because that is by no means the case. I came into P.G.H.S. long after Derby left my Alma Mater and I know very little concerning the present Summit Hill tutor.

But from what I have read and heard from various sources, including two uncles who were taught by Mr. Derby in his days at Pine Grove, he must have been a humdinger. In my opinion I have a fairly good picture of J. Paul Civitts, who produced some great clubs including the “Hummelized” cage team which represented the South Schuylkill Basketball League in the PIAA playoffs versus White Haven, the Mountain League champion. Civitts moved on to Emporium out in Western Pennsylvania and was followed by Alfred F. Lilienfeld, who is now at Hanover, Penna.

No, my aim in that particular letter wasn’t to brush aside Wilbur Derby or anyone else, but who disagrees that the sports records established at our Alma Mater by THE Carmine Pepe during the past two years, after our entire sports set-up had dropped to such a low level, are more than outstanding and hold all our satisfaction? Could Carmine Pepe have done more in his first and second years at Pine Grove High?

Mr. and Mrs. Reber, the voyage across the channel from Old England wasn’t too bad, and I did feel a great deal better when I set foot on the French beachhead safely.

The French are glad to see us and are welcoming us ever since you back home received the big news. In closing I may say – the Germans are tough, but we’re a great deal tougher, which in turn will bring forth V-Day.

Until I move on to my next foxhole closer to Berlin,

In future letters, Schwartz spent more time addressing his experience on D-Day and the bloody days that followed. Schwartz landed in the afternoon of D-Day and avoided the hellish combat on Omaha Beach on the morning of June 6, 1944. His first taste in combat came miles from the beaches, as German tanks and infantry desperately sought to throw the Allied landings back into the English Channel.

One thought on “Letters from War – The first letter from the battlefields of Normandy, June 1944”