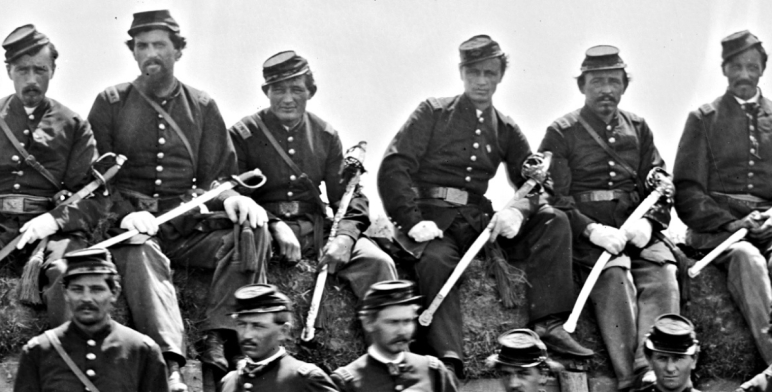 On May 29, 1889, the Pottsville Republican ran an editorial on the eve of Decoration Day (now Memorial Day) that encouraged Schuylkill County residents to honor the area’s Civil War veterans. These veterans, the Republican editors noted, “laid down their lives in the carnage in the Wilderness, or in the struggles at the Petersburg mine and around Richmond” and should be honored for their actions to save the United States. Indeed, more than 13,000 men and boys from Schuylkill County donned the uniform of the US Army between 1861 and 1865. Many never returned.

Yet, on a recent trip through the area, I couldn’t help but notice a number of Confederate battle flags blowing in the breeze and slapped on the bumpers of vehicles in Schuylkill County. For those who fly that flag, I share this powerful editorial from May 1889.

Tomorrow think of the dark days when the news of the attack on Sumter reached the coal mines of Schuylkill and our First Defenders left their mountain homes and pressed through surly Baltimore to garrison the National Capital – think of the gloomy time after the first Bull Run, when these same men guarded the forts in front of Washington, “when treason swept to their very ramparts.”

Think too of the gallant and bloody charges of our boys of the 48th, 96th and 129th Regiments at fatal Fredericksburg. Think also of the good work of our representatives in the 50th and in the 7th Cavalry and numerous other organizations – of the solemn times before Antietam and Gettysburg, when thousands of our citizens rushed to the defense of the State against invasion – of the days when our boys starved in Knoxville and in prison pen and laid down their lives in the carnage in the Wilderness, or in the struggles at the Petersburg mine and around Richmond, or on the fleets of Porter and Farragut, or toiled painfully with Sherman to the sea.

Then think once more of the joyful day when the glorious news of Lee’s surrender was flashed over the wires, and of the gratitude we then felt to our soldier boys, and how eager all were during those trying times to open their purse strings in their behalf.

Think finally of the wonderful progress our country has made since Appomattox day, of the security, the happiness and the prosperity we enjoy, and then reflect what would have been the state of affairs with us today had Schuylkill’s soldiers, in common with those of the North, generally failed to do their duty.

Instead of being, as the London Times recently described us, the greatest of all the nations, which in case of difficulty it would require a combination of all Europe to cope with, we would today be a collection of petty States engaged in frequent strife and may be at this present moment embroiled in a bloody conflict in our very streets.

Think of these things tomorrow, and then resolve to aid to the extent of your power to suitably commemorate the patriotic work of the soldiers of Schuylkill County.

I hope you will heed these words and reconsider flying or displaying that flag in Schuylkill County or anywhere in Pennsylvania.

The Confederate battle flag does not represent rebelliousness or a stand against authority, it represents a failed rebellion that sought to preserve the institution of slavery while tearing apart the Constitution of the United States of America. In that effort, the Confederate army over which this flag first flew invaded Pennsylvania and forcibly dragged African Americans from the Keystone State into slavery.

In the monumental effort to quell the rebellion, Schuylkill County’s young men fought valiantly to save the Union. In their noble effort, more than 600 died in all the places the Republican editors mentioned, and many more. The survivors were left with physical and mental scars that remained with them for the rest of their lives.

An estimated 33,000 Pennsylvanians died during the Civil War. They died to save the United States from those wished to destroy it. I hope you’ll remember them tomorrow. And always.

Featured Image: Officers of the 50th Pennsylvania Volunteer Infantry at Gettysburg in July 1865. Most of these officers came from Schuylkill County.