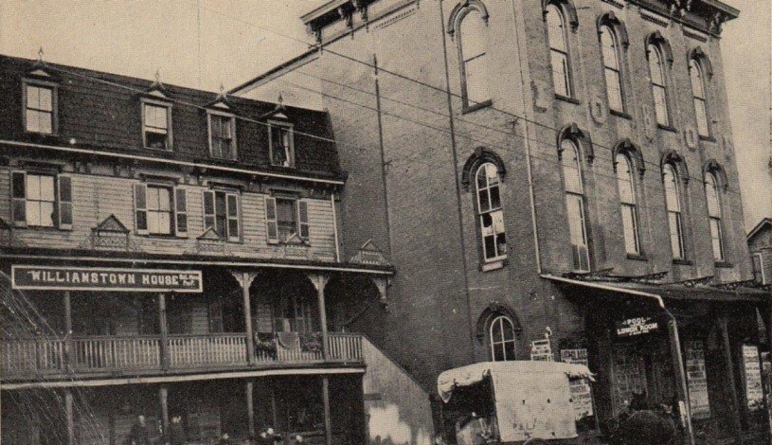 Over the decades, Coal Region towns and communities have watched as vestiges of their former vibrancy have fallen into disrepair or disappeared completely. Williamstown is no exception. Residents of the coal town at the northeastern border of Dauphin County have watched as movie theaters, hotels, storefronts, and other signs of past economic success vanished as the years rolled by. The Williamstown Opera House on Market Street was one of these keystones of the local community lost in the 20th century.

Recalling these buildings, their uses, and their former owners have become a staple of nostalgic Facebook pages and groups online, where memories of these places have been remembered. Williamstown, PA – My Hometown and Billstown Generations are two examples from just this small corner of the Coal Region.

For me, born as the 20th century came to a close, these memories often represented the only opportunity to experience the colorful history of my hometown. Stories of Williamstown, its people, and its institutions fascinated me and helped inspire my interest in history. I spent many days as a child walking through town examining old buildings comparing them to old photographs and walking among ruins at the former site of Williamstown Colliery. My goal: try to imagine what it was like to live and work in this community in its “heyday,” the 19th and early 20th centuries.

Years later, training as a historian has given me new tools in my battle to visualize the past and tell the story of these Coal Region communities and the people who populated them. Occasionally, a historical document will give me what I always wanted on my walks as a child: a chance to walk through a long-demolished building that was central to life in my hometown.

The December 20, 1872 edition of the Lykens Register gives us the opportunity to explore the interior of the “Williamstown Public Hall” that was completed in December 1872. The imposing three story brick structure stood on the north side of Market Street adjacent to the Williamstown House, a hotel and tavern near the center of Williamstown.

A reporter explored the building with the owner, E.B. Novoick in the days before the grand opening on a bitterly cold day in December 1872.

The new public hall building in Williamstown will be dedicated on Wednesday evening next by a grand ball and supper. The building is of brick, 30 by 70 feet, 45 feet eight inches high above the wall.

Mr. Noviock, the proprietor, kindly showed us through the building this week, and we venture to say, for the purposes for which it is designed, it is not excelled for convenience and modern arrangement in any small town in the State.

We first enter the basement by stone steps from either side of the building, which is divided into rooms for a restaurant, a fire-proof room for two large Littlefield heaters, by which the entire building is warmed, and a large cellar for the store, accessible from no other part of the building.

The entire front of the ground floor is occupied by a storeroom 23 by 50 feet and a small room for an office. In the rear of store room is a warehouse 18 by 27 feet, and also a narrow, dark room, in which to keep meats, etc. The entrance to the halls is from the west (or hotel) side of the building by a stairwav 4 feet 6 inches broad. Facing the door is a small room for a box office. This floor is 12 feet in the clear.

Passing up the stairway to the second floor, you enter the public hall, a well-proportioned, airy room, 29 by 50 feet, 14 feet in height, with a stage 18 by 20 feet, having a dressing room on each side 14 by 17 feet. An offset at the rear of the passage way to the third floor opens a private entrance to the hall.

On the third floor, which is arranged for secret societies, you enter a reception room 10 by 14 feet, contiguous to which are rooms 12 by 24 feet and 10 by 12, and six closets six feet square, with hoisting doors.

The lodge room is 27 by 48 feet, with a six feet ventilator in the ceiling height of room 13 feet. The public hall is ventilated from each side by cold air flues extending from the top of the house. The building is a massive structure, symmetrical in its projections, and will be an enduring monument to the enterprise and public spirit of its projector and builder, Mr. E. B. Noviock.

The public hall later became known as the Williamstown Opera House or Odd Fellows Hall. It hosted parties, meetings, events, musical acts, theater demonstrations, and dozens of other events over the course of its use.

Like many of Williamstown’s most storied establishments, the imposing building was lost in the mid-20th century, its function as a home for entertainment could no longer be supported by the shrinking community hit hard by the loss of the mining industry during the Great Depression and the Second World War.

An automobile service station was built atop the site, but even that has been shuttered for most, if not all of my life. The Williamstown House that stood next to the opera house remains standing, home to Williamstown’s Veterans of Foreign Wars post.

Above Photograph: Current view of the former Williamstown House and site of the Opera House. The small block building adjacent to VFW stands where the Opera House once stood. Nothing remains of the original building.

Though the opera house has been lost to history, the story of its place in Williamstown remains in the historical record.

Featured Image: A postcard view of the Williamstown House and Opera House on Market Street (Williamstown – My Hometown)