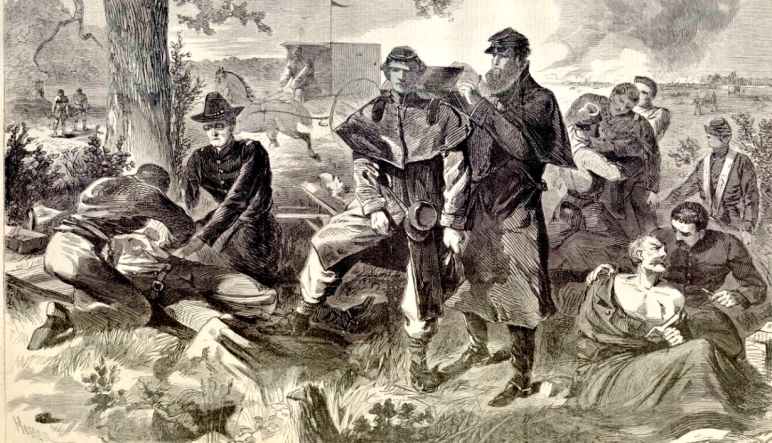 As the men of the 96th Pennsylvania huddled in their makeshift tents and log cabins on a hillside near Alexandria, Virginia, one among them sat to write a letter to his wife back home.

Assistant Surgeon Washington Nugent had been with the regiment since its inception at Pottsville in September 1861. He and the regimental surgeon, Dr. D. Webster Bland, spent most of their time tending the sick that had come down with various camp diseases prevalent in the hundreds of army encampments surrounding the Union capital.

He wrote home to his wife Mary in Pittston, Pennsylvania on this most sacred of nights.

This morning we went over and having little help, put up our Hospital tent and our own two new ones, but returned this evening to our old quarters to sleep. We have one Hospital tent here yet with five sick ones in it whom we expect to move over tomorrow. I think we will both sleep soundly tonight as we are both pretty well tired and there is no one here to distract us. We have a detail of two men for guard over our Hospital and our own tent.

The day has been very clear and pleasant. All the men had a goodly share of fresh meat served out to them and very many were fortunate enough to receive presents of good things from home in the shape of eatables so that there were many light hearts in Camp and I am very happy to say that their gayety was not marred by any unpleasant occurrences and that our Camp was entirely free from any charge of excesses or bad conduct which unfortunately cannot, I think, be said of some others if we are allowed to judge by some specimens we saw being taken home with iron bracelets upon them.

I must tell you my dear wife that although we missed much, nay all, that has contributed in years gone by to make this day the brightest and pleasantest in our book of memory yet still so far as “man the animal” was concerned we fared well. A late dinner about two o’clock. We were ushered into a large and comfortable boarded tent some twenty feet long and about as wide where a very bountifully supplied table awaited the onslaught of about as hungry a set of individuals as ever attacked a Christmas dinner.

All praise is due to our worthy Sutler and his assistants for the handsome manner they had prepared the table. I must tell you something of the bill of fare. In the first place turkey, that ever present individual at such feasts, graced each end of the long table, roasted too in a style that would have done credit to the head cook at St. Nicholas or the Continental. Lamb & Beef Roasted – a goodly share of vegetables, potatoes, etc. All the condiments, the side dishes I will not mention, I forget what they were – celery, figs, apples, almonds, raisins, cakes, pies, etc.

The apples were large and very fine, piled up in a pyramid shape covered partially with bunches of raisins, figs in abundance, in a word indeed it was such a table as you would dream of stumbling upon in a Camp in the dreary month of December but it is how they were enjoying the day and I feel sure many a heart was anxiously wishing for the dear familiar faces they were wont to meet on other Christmas days and the only feeling which comes back to cheer us at such moments is the proud satisfaction that our absence from the cherished scenes of home rises from the fact that our country’s danger demanded our presence here, and I feel certain that whatever aid in time of need our arms can give towards the glorious cause of our beloved country will be given freely…

Accept a large share of love and kisses yourself and ever believe me your devoted husband.
Wash

Dr. Nugent was far from alone in his sentiments about his “absence from the cherished scenes of home.” Hundreds of thousands of young men were now enrolled in the armies of United States; citizen-soldiers who had left their peaceful world to preserve the Union. They could not have realized that their beloved country would spend three more Christmases at war with rebellious foes at the South.

This letter and others are part of a collection Dr. Nugent’s writings compiled in a book:

“My Darling Wife…”: The Letters of Washington Nugent, Surgeon, Army of the Potomac

The book and numerous other resources related to the 96th Pennsylvania can be found at the United States Army Heritage and Education Center in Carlisle, Pennsylvania.

One thought on “A Surgeon’s Christmas in the Army of the Potomac – Dr. Washington G. Nugent of the 96th Pennsylvania”